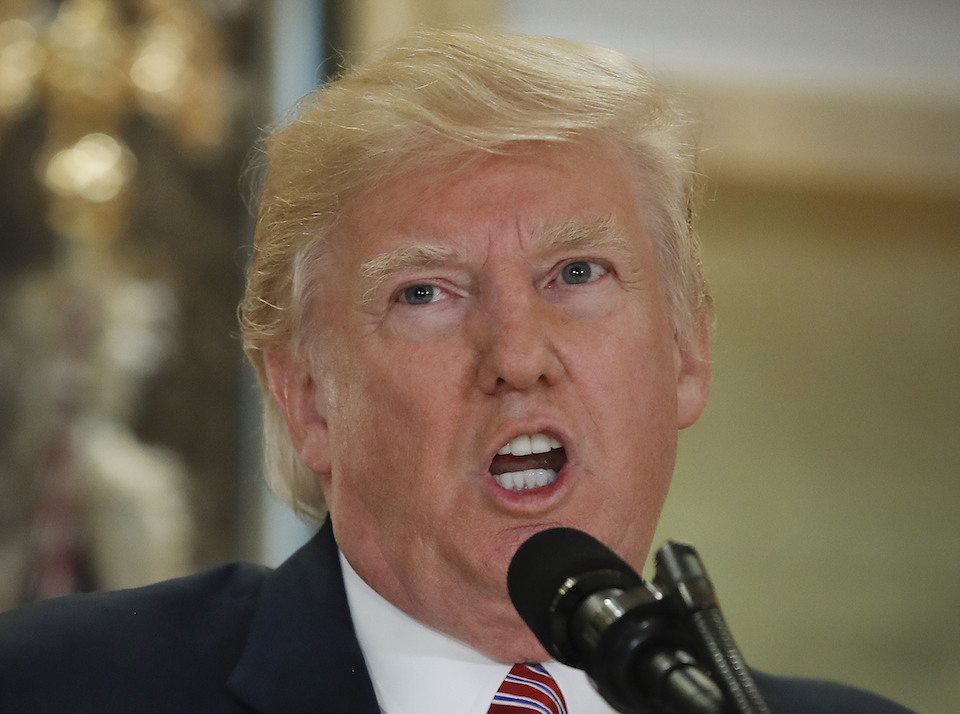 Republicans are forcing taxpayers to subsidize Trump's despotic attack on a private company.

Congressional Republicans have joined the Trump administration's fight against outdoor retailer Patagonia, using an official government Twitter account to accuse the company of lying to sell its products.

The move comes in response to Patagonia's announcement this week that it would be suing the Trump administration over its recent decision to massively scale back the size of two national monuments in Utah. The retailer referred to the dismantling of federally protected public lands as an "illegal [and] unprecedented attempt to shut down our national monuments."

Patagonia also fired back at Trump on its website earlier in the week, turning the homepage into a graphic emblazoned with the message, "The President Stole Your Land."

Now, House Republicans have jumped in to defend the Trump administration.

On Thursday, the House Committee on Natural Resources, led by Rep. Rob Bishop of Utah, posted a mimicking graphic to Twitter proclaiming, "Patagonia Is Lying To You."

The tweet, sent from an official government account, not only attacked a private American company, but also took a swipe at Patagonia's customers — referring to them as "wealthy elitist urban dwellers."

And in addition to being offensive and inappropriate, the GOP's use of a government account to go after a private company raises a slew of legal and ethical concerns, as noted by Walter Shaub, the former director of the U.S. Office of Government Ethics.

The government "officially and publicly calling a company a liar for political reasons is a bizarre and dangerous departure from civic norms," Shaub wrote on Twitter.

He also said the "attack on Patagonia sure looks a lot like a violation" of House committee rules regarding social media communication.

Additionally, Shaub noted, it appears that House Republicans may be violating another set of rules by using taxpayer dollars to fund the partisan attack on a private company.

"It's hard to reconcile the appropriations law principle of using funds (salaries) only for necessary official activities with the notion of attacking an American company like Patagonia — especially attacking for partisan, not official, purposes," Shaub said in a tweet.

Furthermore, while Republicans are accusing Patagonia of only caring about its bottom line, they failed to mention the profit-driven motives of Trump's assault on national monuments, which opens up the previously protected land to corporations and mining companies.

Rep. Jason Chaffetz of Utah already admitted that scaling back the size of Big Ears would make the land available for "resource extraction."

And as the Washington Post reported on Friday, the Trump administration's decision to slash the size of the national monuments came after an intense lobbying effort by a uranium firm:

A uranium company launched a concerted lobbying campaign to scale back Bears Ears National Monument, saying such action would give it easier access to the area’s uranium deposits and help it operate a nearby processing mill, according to documents obtained by The Washington Post.

Interior Secretary Ryan Zinke and top Utah Republicans have said repeatedly that questions of mining or drilling played no role in President Trump’s announcement Monday that he was cutting the site by more than 1.1 million acres, or 85 percent. Trump also signed a proclamation nearly halving the Grand Staircase-Escalante National Monument, which is also in southern Utah and has significant coal deposits.

But the nation’s sole uranium processing mill sits directly next to the boundaries that President Barack Obama designated a year ago when he established Bears Ears. The documents show that Energy Fuels Resources (USA) Inc., a subsidiary of a Canadian firm, urged the Trump administration to limit the monument to the smallest size needed to protect key objects and areas, such as archaeological sites, to make it easier to access the radioactive ore.

In other words, Republicans are not only using taxpayer dollars to attack private companies — they're also backing a plan to steal public lands and hand them to mining companies, which stand to profit immensely from the unprecedented land grab.

Even Scrooge would say that's a step too far.