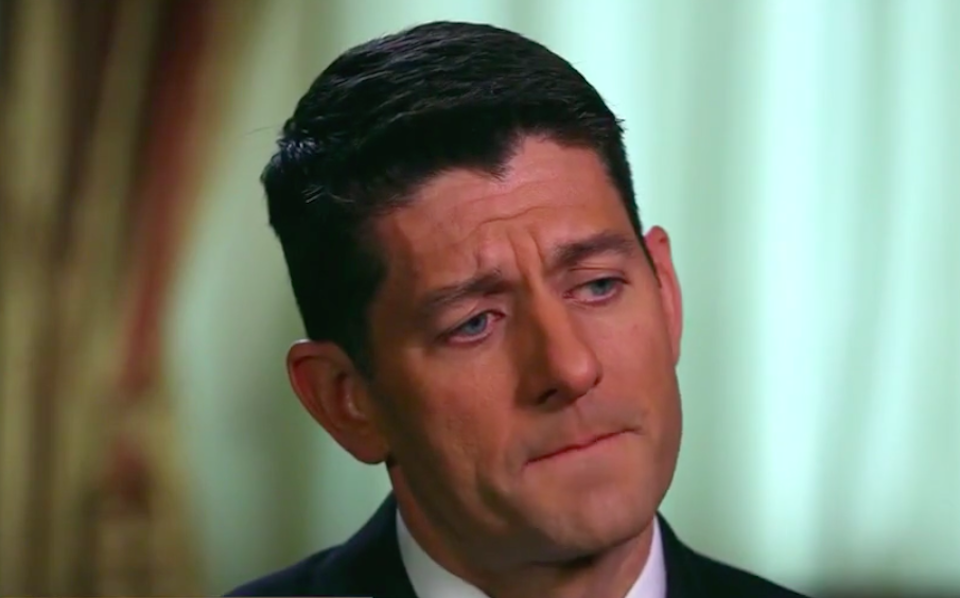 Paul Ryan took a definitive stance against sexual predators like Harvey Weinstein, wherever they may turn up. But he neglected to mention the one in the White House.

House Speaker Paul Ryan believes that sexual harassment and abuse are repugnant and unacceptable behaviors, and that wherever they occur, the perpetrators must be called out and punished.

But his denouncement would mean a lot more if he applied it to the leader of his own party.

In an interview with MSNBC's Kasie Hunt, Ryan offered pointed yet somewhat vague condemnation of Harvey Weinstein — someone he said he had never heard of before the multiple allegations against him of sexual misconduct and assault came out in The New York Times and the New Yorker.

Throughout his answers, Ryan referred to "things" and "stuff" when referencing the physical violations of which Weinstein has been accused.

And not once did he mention the White House Weinstein: his party leader, Donald Trump.

Hunt noted that Weinstein "operated in an entertainment culture that clearly allowed powerful men to go unpunished" and that served to silence victims, and she asked Ryan if he thought a similar culture existed in Congress.

"It would be naive to suggest that that doesn't happen," Ryan responded, stating that he believed "exposing these things can help improve the culture."

Ryan labeled the accusations against Weinstein as "horrendous," stating that "no woman should ever fear that they have to put up with this kind of stuff."

He went on to agree that sexual abuse can occur anywhere: "I think in any institution, wherever you look in society, you're going to have these kinds of problems."

And he was clear about what he felt ought to be done in cases like those against Weinstein. "The more you can expose it and the more we can castigate people in society on these things, to show that this is not acceptable behavior, I think that's to the good," he declared.

Ryan is correct that this kind of sexual predation occurs in every sector of our society — not just Hollywood, but also journalism, the tech industry, medicine, the finance industry, the restaurant industry, and more.

Sexual abusers can be found anywhere. Including the White House.

Trump has been accused of sexual abuse by multiple women over years and years, and his insistence that every single one of them is lying is blatantly belied by his own disgusting words.

Much of this was known before the election in 2016, and while Ryan told his fellow House Republicans at the time that he was "not going to defend Donald Trump — not now, not in the future," and said that he was "sickened" by Trump's comments on the "Access Hollywood" tape, he still supported his candidacy.

And he has continued to prop up Trump's failing, dangerous presidency ever since.

If Ryan truly believes that sexual abusers ought to be "castigated" no matter how famous or powerful they are, he could start a lot closer than Hollywood, California — down the street from his own Congressional office.