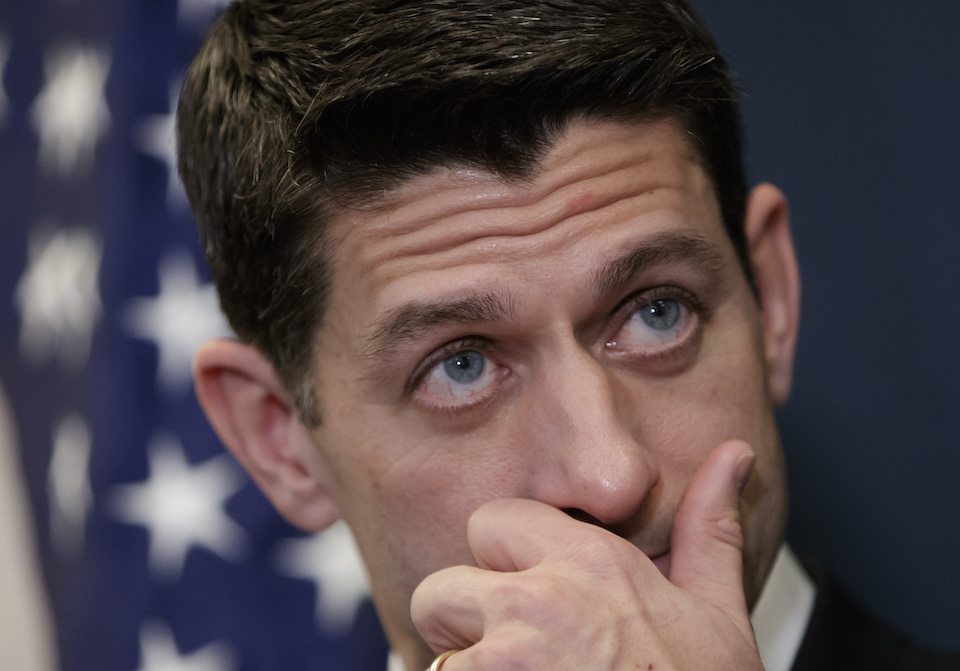 Paul Ryan has given a pass to racist fellow Republicans like Trump and Rep. Steve King — but he's trying to shut down Maxine Waters for speaking out against the Trump administration.

Speaker Paul Ryan recently got called out for failing to censure his fellow Republican, Rep. Steve King of Iowa, for retweeting racist comments from a neo-Nazi.

But when Ryan finally released a statement responding to the charges of hypocrisy, he couldn't even bring himself to use King's name to reprimand him for supporting fascists.

King's retweet gave a boost to anti-immigrant commentary from well-known British neo-Nazi Mark Collett, who has expressed admiration for Adolf Hitler and described himself as a "Nazi sympathizer."

"The speaker has said many times that Nazis have no place in our politics, and clearly members should not engage with anyone promoting hate," AshLee Strong, Ryan's spokeswoman, said in a statement to reporter Sam Stein.

But Strong's statement didn't mention King's name at all — even though Stein specifically asked about Ryan's silence when a member of his caucus promoted someone who openly admires Hitler.

That's a sharp contrast to Ryan's reaction to Rep. Maxine Waters (D-CA) this week. Ryan demanded an apology from Waters after she encouraged the public shaming of Trump administration officials for separating children from their families.

Waters had encouraged her supporters Sunday to publicly confront members of the Trump administration for putting children "in cages":

Let's make sure we show up wherever we have to show up. And if you see anybody from that Cabinet in a restaurant, in a department store, at a gasoline station, you get out and you create a crowd. And you push back on them. And you tell them they're not welcome anymore, anywhere. We've got to get the children connected to their parents. We don't know what damage has been done to these children. All that we know is they're in cages.

Some critics accused Waters of going too far, claiming her remarks advocated harassment and even violence. That was Ryan's complaint when he called Waters' remarks "dangerous" to society.

Waters defended her remarks by emphasizing that she supports peaceful protest, and clarifying that she wasn't calling for physical violence against public officials.

Stein suggested that Ryan was being hypocritical for chastising Waters while ignoring King's support of a neo-Nazi.

And Ryan made himself look even more hypocritical and cowardly by failing to call King out by name, and failing to specifically condemn his tweet promoting a Nazi apologist.

He also didn't mention King's many other overtly racist comments.

Ryan has also frequently been complicit and kept quiet about Trump's racism and bigotry while he seeks to pass of tax cuts and other elements of the Republican agenda.

When he attacks Waters, Ryan is doing the same dirty work as Trump and their mutual allies at outlets like Fox News.

If he truly cared about "dangerous" commentary by members of the House, Ryan would clean up his own party's mess with people like King. But he doesn't, because his public posture is a cynical ruse.