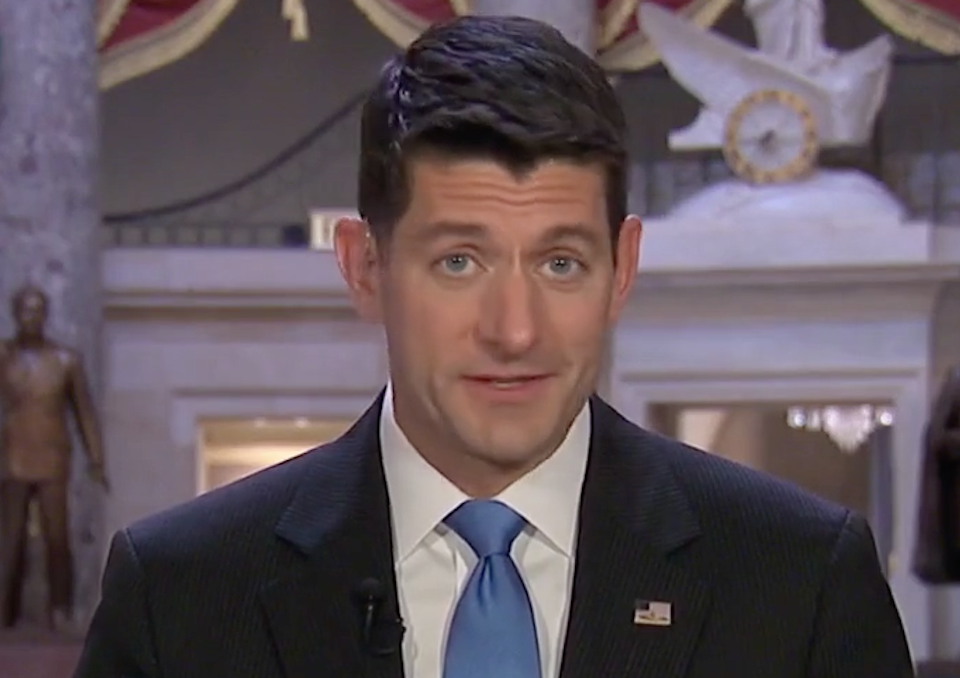 Speaker Paul Ryan told reporters that he is "really excited" about the Republican tax scam that would raise taxes on working families to give away billions to the rich.

Speaker Paul Ryan (R-WI) gushed that he was "excited" about the Trump tax scam that would raise taxes on the bottom rung of American workers while cutting taxes for the ultra-wealthy like Donald Trump and his ultra-wealthy Cabinet.

The scheme developed by Trump's team, along with Ryan and Senate Majority Leader Mitch McConnell, would change the current system to raise tax rates on the lowest wage earners.

That increase on working-class Americans would pay for tax cuts for those at the highest end of the system, along with giveaways like a repeal of the estate tax, which affects only the richest of the rich. Right now, the ultra-wealthy face 39.6 percent taxes at the top. Under the GOP scheme, that would come down to 35 percent.

Trump stands to benefit in a "yuge" way from the proposal if it ever becomes law. It is impossible to know what his tax status is because he won't reveal his returns, but based on his claim of a net worth of $10 billion, the plan to repeal the estate tax would give away $4 billion to his children when they inherit his estate.

Appearing on CNBC to tout the proposal, Ryan said he was "really excited" about the skewed proposal and touted it as something he's been pushing for "pretty much my adult life," from the time he served on the staff of Rep. Jack Kemp (R-NY).

RYAN: Look, I'm really excited about this, Joe. I gotta tell ya. I've been working on this pretty much my adult life. I was Jack Kemp's staff economist, you know, working on this stuff back in the '90s. And I was chair of the ways and means committee before I had this job. [...]

We are all in on this, we are unified on this, and we are excited about this.

Previously, Ryan bragged that he had been "dreaming" of kicking poor people off of Medicaid since he was "drinking out of a keg" at college.

This latest plan is part of his long history of pushing the concerns of the ultra-wealthy over the poor and middle class. In Congress, he has fought for years to Medicaid, Social Security, and other critical programs for regular Americans — all to give even more money to the richest Americans.

Even worse, Ryan has often cynically invoked his Catholic faith to justify this behavior. When he proposed his draconian budget that cut services for the poor while favoring the wealthy, Ryan said he was "using my Catholic faith" when weighing the priorities in the proposal.

But a letter from the U.S. Conference of Catholic Bishops slammed his plan, pointing out that "a just framework for future budgets cannot rely on disproportionate cuts in essential services to poor persons." Jesuit Father Thomas J. Reese explained, "Ryan’s budget reflects the values of his favorite philosopher Ayn Rand rather than the gospel of Jesus Christ."

His refusal to deviate from this twisted set of priorities recently backfired, as he was booed on national television for lecturing a nun and telling her that cutting programs for the poor was for their own good.

Recent history also shows the danger of the Ryan plan. In the CNBC interview, he called the proposal a "game-changer for our economy."

In 2002, President George W. Bush sold his package of tax cuts for the wealthy with the promise that it would "help produce real prosperity."

Those cuts helped to produce a massive $1.2 trillion deficit — Bush had inherited a surplus from Clinton — and the economy slid into the Great Recession where the country and the global economy lost millions of jobs and economic chaos rocked the world.

The economy has recovered under the tax policies championed by President Barack Obama and his Democratic allies in Congress.

Ryan's dream is to throw those gains away, while raising taxes for working families.

As he told CNBC, "We are all in on this, we are unified on this, and we are excited about this."