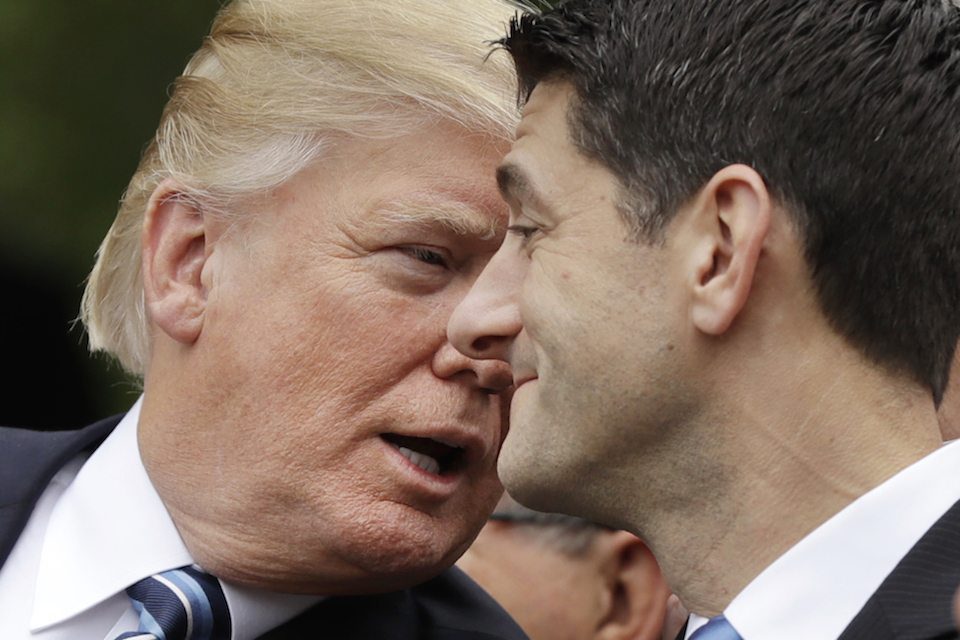 In addition to his role as Speaker of the House, Paul Ryan has apparently become a TV pitchman for Donald Trump's corrupt hotel.

And a recent aside during an interview with Fox News demonstrated the latest phase of their relationship.

Tuesday morning, ahead of Trump's first State of the Union address, Ryan appeared on "Fox & Friends"  Trump's favorite show on the network and one he has used as an informal presidential adviser. Perhaps aware that the leader of his party was tuning in, Ryan made sure during his interview to proudly point out Trump's hotel in Washington, D.C.

Seconds after he pointed out the Washington Monument, Ryan quickly pointed to Trump's own monument to himself. "And see, Washington Monument is the tallest thing. But you see the second tallest structure here in Washington, that tower? You know what that is? Thats the Trump Hotel," Ryan gushed to reporter Ainsley Earhardt.

He added, "When I brought the president and the first lady out here to show them the view, he said, Hey, thats my hotel. Yeah. Its pretty cool."

What Ryan didn't mention is that the hotel is also an underperforming establishment, kept afloat by corruption.

The Trump International Hotel reportedly had an occupancy rate of 50 percent over the first year of Trump's presidency. That is 27 percent below the industry average of 77 percent for other luxury hotels in Washington.

But thanks to Trump's break with presidential tradition, the hotel has become the go-to venue for influence peddlers foreign and domestic. Trump did not divest from his real estate company or put his holdings in a blind trust, so when the hotel brings in money, he benefits.

The D.C. hotel has put its rates artificially high above the competition and is raking in money from Republicans, along with big businesses and foreign governments that hold events at the hotel or push their personnel to stay there.

That money goes to Trump, as he sits in the Oval Office and makes key decisions involving many of the guests at his hotel.

When Ryan spoke to Fox News, he could have used the opportunity to demonstrate some independence and integrity and note that Trump's hotel is part of the D.C. skyline and also emblematic of the so-called "swamp" he campaigned against.

But he didn't do that. As he previously described the situation, he has "merged" his agenda with Trump's.

That apparently now means turning the office of the speaker into a glorified travel agent, promoting Trump's business instead of being an advocate for American citizens who are witnessing the ongoing corruption of their federal government.