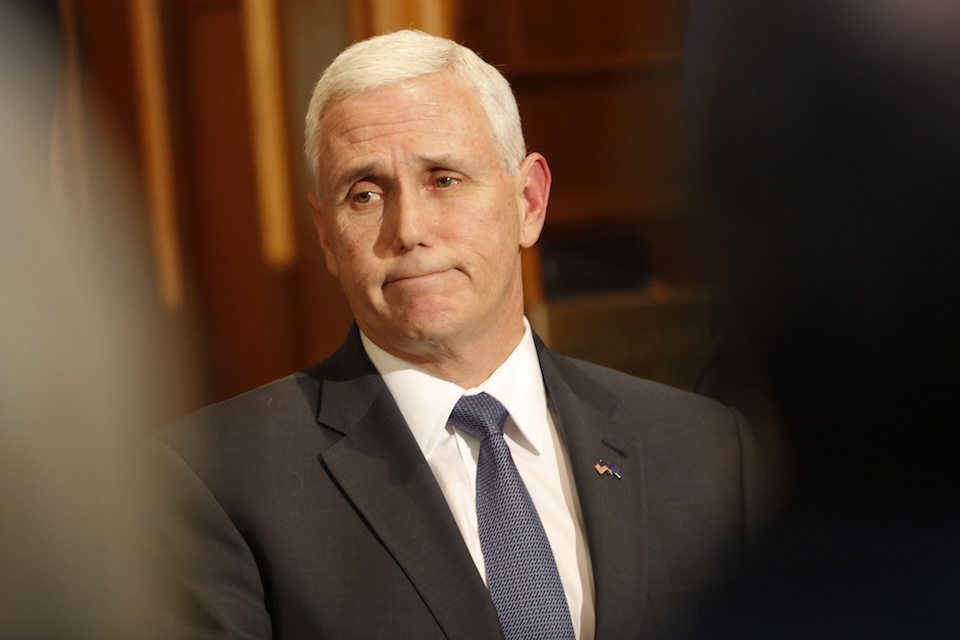 (AP Photo/AJ Mast, File)
Get The American Independent in your inbox

Pence is set to attend an event for Concerned Women for America, which issued a 'call to arms' after same-sex marriage became legal in 2015.

Mike Pence is scheduled to visit with the group Concerned Women for America (CWA), a virulently anti-gay conservative group, days after the White House insisted that Pence was not "anti-gay."

".@SecondLady and I are excited to attend the 40th Anniversary of @CWforA!" Pence tweeted on Thursday. "The women of Concerned Women for America have been leading a conservative movement for over four decades and we are honored to join them!"

CWA was founded in the 1980s in opposition to the Equal Rights Amendment and has pursued an anti-equality message ever since.

Pence's tweet comes a little more than a week after deputy White House press secretary Judd Deere tweeted that Pence was not "anti-gay" because he held meetings with the Irish prime minister and his male partner.

"For all of you who think our @VP is anti-gay, I point you to his and the @SecondLady’s schedule tomorrow where they will join Taoiseach @LeoVaradkar and his partner Dr. Matthew Barrett for lunch in Ireland," Deere wrote on September 3.

Under the "core issues" section of the CWA's website, the group declares, "CWA believes that marriage consists of one man and one woman." CWA laments "the attempt to eliminate natural distinctions between men and women."

Additionally, after the 2015 Supreme Court decision in Obergefell v. Hodges, which legalized same-sex marriage, CWA general counsel Mario Diaz noted that the group and his supporters "felt a little abandoned" by God.

According to Diaz, the decision was an "attack on God’s earthly symbol of His relationship to His bride, the Church" and that it meant marriage in America "is finished."

Speaking on CWA's behalf, Diaz issued a "call to arms" and said the national cannot "allow sin to be unchallenged as a valiant choice, blessed and encouraged by government."

Diaz added at the time that the group's long-term goal is to "overturn Obergefell" by "appoint[ing] Justices to the Supreme Court who will repudiate the Court’s current power grab." He also advocated for a constitutional amendment that would allow states opposing same-sex marriage to institute bans on those unions.

Since then, Penny Nance, the group's CEO and president, has said that Trump and Pence have fought "for everything we hold dear" and in an open letter told Trump he had "an army of Concerned Women who will support your Administration as you fight for faith, family, and freedom."