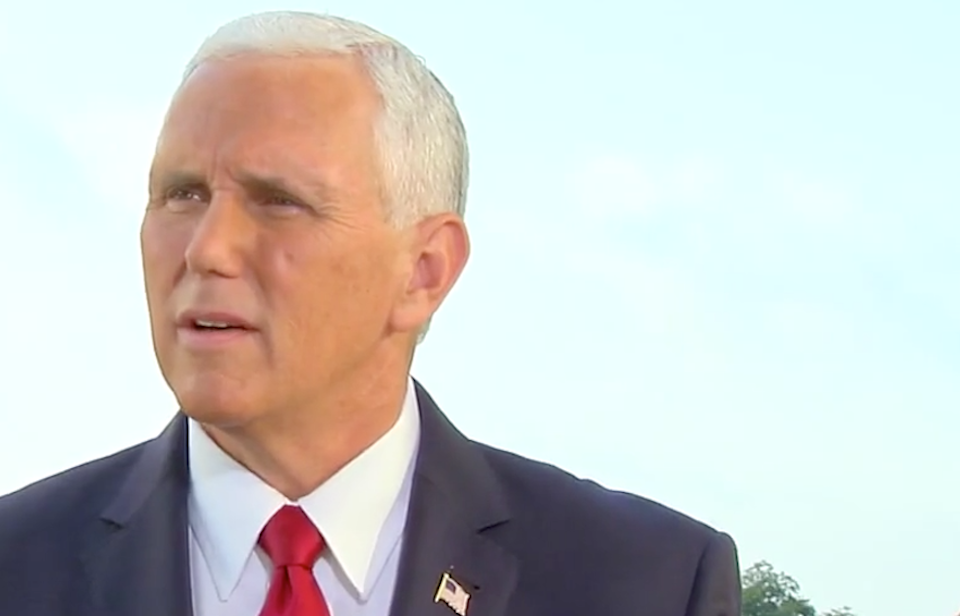 When it comes to defending and celebrating white supremacy, Mike Pence proved he is no better than Donald Trump.

Mike Pence has made it perfectly clear that he is standing with Donald Trump and his atrocious defense of Nazis and white supremacists, no matter how many others abandon him.

As Trump spent much of last week railing against "both sides" — the rioting white supremacists and the anti-racists who opposed them — and defending the monuments to white supremacy that Trump described as "beautiful" and "very, very important" statues, his loyal vice president has backed him up.

But Pence reached a new and deplorable low on Tuesday, when he invoked the name of Georgia congressman and civil rights icon John Lewis to defend his and Trump's support for preserving these horrific monuments to white supremacy.

Asked on the unapologetically pro-Trump show "Fox & Friends" whether Pence agrees that Confederate monuments should be removed from the Capitol, Pence told host Ainsley Earhardt that he stands with the president in wanting to preserve those monuments that glorify traitors of the United States.

EARHARDT: Some are calling for the Confederate monuments at the Capitol to be taken down. Do you agree?

PENCE: Well, first off, I agree with the president that seeing people destroy public property in the name of any cause is just simply unacceptable. [...] I hold the view that it's important that we remember our past and build on the progress we've made. [...] What we have to walk away from is the desire by some to erase parts of our history in the name of some contemporary political cause.

EARHARDT: So you're in favor of keeping the monuments?

PENCE: Obviously, I think that should always be a local decision. [...] I'm someone who believes in more monuments, not less monuments. What we ought to do is we ought to remember our history. But we also ought to celebrate the progress that we've made since that history. You know, when I walked, back in 2010, across the Edmund Pettus Bridge with John Lewis, arm in arm, and we remembered Bloody Sunday, and the extraordinary progress of the civil rights movement, I can't help but think that rather than pulling down monuments, as some are wont to do, rather than tearing down monuments that have graced our cities all across this country for years, we ought to be building more monuments. We ought to be celebrating the men and women who've helped our nation move toward a more perfect union.

It is bad enough that Pence agrees with Trump that monuments to traitors have a rightful place in this country. But Pence went beyond that defense to something even more cynical and ugly.

John Lewis was beaten nearly to death for marching against the very white supremacy those monuments and statues celebrate. For Pence to try to link himself to Lewis — "arm in arm," no less — to justify his defense of honoring white supremacy is a disgrace. Certainly Lewis is not going to easily forget our nation's ugly history, even if every Confederate statue in America is removed.

And neither will those who have even casually perused a history book and know that the majority of those monuments were erected for the very specific purpose of intimidating African-Americans, decades after the Confederate traitors were defeated.

That's not a history that should be celebrated or honored. And for the vice president of the United States to insist that there is no other way for our nation to remember its ugly past — that those statues that have "graced our cities" must remain in place — proves he does not know the first thing about our nation's history.

Perhaps he should ask his good friend John Lewis — who has called for the removal of such monuments — to explain it to him.