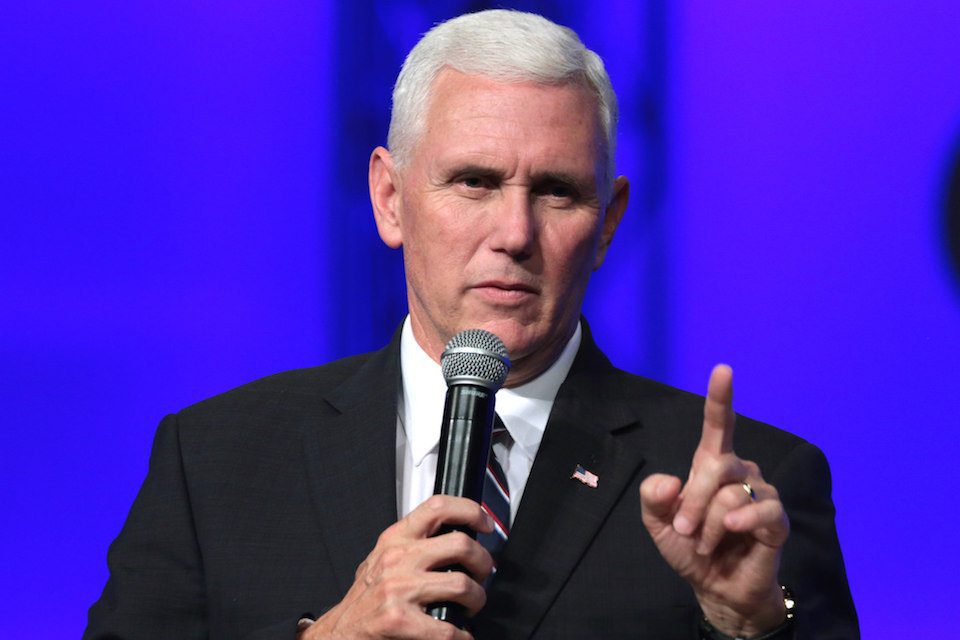 Mike Pence is on a media blitz to insist the Trump administration will fund Hurricane Harvey relief. But fully funded disaster relief wasn't something he supported when he was in Congress.

Mike Pence is on a self-serving blitz of radio appearances this week, touting the Trump administration's response to Hurricane Harvey. That includes promises to have federal funds ready to go for relief — something he cruelly opposed when he was in Congress.

Pence had the nerve, during his several radio interviews Monday, to repeatedly refer to his time in Congress as proof he understands the importance of passing legislation to provide for disaster relief.

"We're very confident that the Congress of the United States is going to be there to provide the resources necessary," Pence told the host at Houston's KHOU. He added that he will work with legislators to "make sure that the disaster assistance that already some 22,000 Texans have signed up for is available and is there."

But when thousands of citizens affected by Hurricane Katrina in 2005 needed Pence's help, he had other priorities. He was instead focused on bludgeoning those citizens by attaching his extremist political ideology to disaster relief bills, holding up vital support that was urgently needed.

Pence said that funding for Katrina relief should be paid for with cuts to Social Security and Medicare, ideas that the right has championed for decades, even though they have proved to be unpopular and destructive again and again.

Justifying his cruelty, Pence told reporters at the time that Katrina relief and the rebuilding of devastated areas like New Orleans just had to wait, because "it is not acceptable to take a catastrophe of nature and turn it into a catastrophe of debt."

He also said on the floor of the House, "When a tree falls on your house you tend to the wounded, you rebuild and then you figure out how you are going to pay for it."

Ignoring the dire situation in the region, Pence lectured victims and offered up right-wing talking points.

"Let’s pay for the cost of Katrina by reducing the size and scope of government," he said.

Pence even said that legislators should have considered delaying a $40 billion prescription drug benefit for seniors, and use that money for Katrina relief — instead of approving new funding in Congress.

Those statements, in contrast to his platitudes during Hurricane Harvey, show how Pence and his fellow Republicans have often instigated mealy-mouthed concerns about "debt" when they are out of power, only to disregard them when they are in charge.

Pence is not alone in his hypocrisy. Other Republicans have argued that disaster relief must be "offset" by cuts to necessary programs. It's a despicable way to exploit a national disaster to target programs Republicans have long sought to dismantle.

Sen. Ted Cruz (R-TX) is pushing for hurricane relief now, but when Superstorm Sandy hit New York and New Jersey, he voted against the emergency aid package to help the victims. He complained at the time that the bill had been loaded up "with billions in new spending" unrelated to the storm. Like Pence, he also invoked worries about "debt" to justify his stance.

The claim was also untrue. Cruz recently made the same claim while defending his Sandy spin, and it was fact checked by the Washington Post, which awarded him "three Pinocchios" for his ugly lie.

"The bill was largely aimed at dealing with Sandy, along with relatively minor items to address other or future disasters," the Post noted.

Mick Mulvaney, currently serving as Trump's budget director, was in Congress during Sandy as well, and he was among those who also called for budget cuts to offset storm relief.

It is unlikely he will do so now from inside the White House.

Pence, Cruz, and Mulvaney have been exposed as hypocrites. When they were out of power, they didn't think twice about holding up disaster relief so they could engage in political experimentation for the right.

But now, when the storm is on their watch, all the hand-wringing about "debt" has evaporated into thin air. As if it was always a cynical and callous ruse all along.