Home National Pence jokes about who is really in charge; evades about member of...
Support progressive journalism.
Donate today 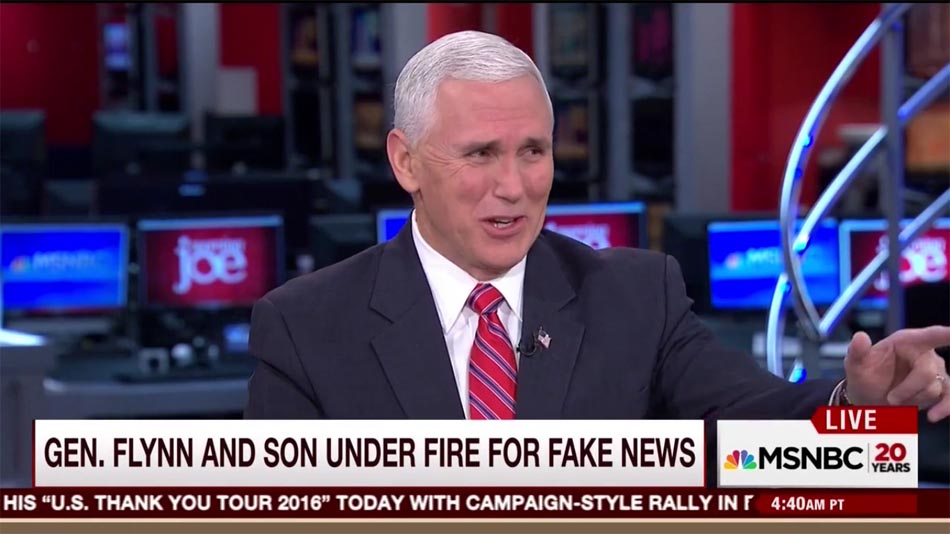 Vice-President-elect Mike Pence appeared on Morning Joe, where he was asked about Michael G. Flynn, a member of the Trump transition team retweeting false and dangerous conspiracy theories. Pence evaded about Flynn's role in the transition, and had a good laugh about whether it is he or President-elect Donald Trump who is really in charge.

Mike Pence is emerging as the most powerful vice-president ever. It was Pence who orchestrated the Carrier deal for which Trump is taking credit. It is Pence who is attending the intelligence briefings. It is Pence whose agenda is written all over the cabinet picks so far.

And it is Pence who is leading Donald Trump's White House transition team. Which is why he was asked, during his appearance on MSNBC's Morning Joe, to address concerns about Michael G. Flynn, the son of Trump's National Security Advisor General Michael T. Flynn, tweeting about the “Pizzagate” conspiracy theory, which led to a man walking into the site of the conspiracy theory with an AR-15 to "self-investigate."

In the middle of the exchange, there was a revealing moment about the power behind the gold chair. Joe Scarborough asked Pence about running the transition, and Pence agreed that he was, then carefully backtracked, saying Trump is in charge, but he is "chairing it." Everyone had a good laugh, including Pence, about his very political answer.

Barnicle: Governor, with regard to your national security team, there's a growing concern among a lot of people about some of the things that National Security Advisor General Mike Flynn has retweeted, fictitious stories; his son is involved in retweeting absurd conspiracy theories. What's the level of concern within your national security apparatus about General Flynn's son?

Pence: Well, General Flynn's son has no involvement in the transition whatsoever.

Barnicle: He has a transition email.

Pence: Well, he has no involvement in the transition whatsoever.

Scarborough: Not at all? [crosstalk] Let me ask you that again. [crosstalk] Just want to underline that. So, you're running the transition, right?

Brzezinski: But you're chairing it. You're in charge.

Scarborough: [as Pence continues to laugh] He's good. Rudy Giuliani would have said, "Not only am I running the transition; I'm running the world!" But anyway! So, you were saying, as the head of the transition, that Flynn's son is not involved at all in the transition.

This is a perfect example of why it is important to keep our eyes on Pence. Unlike Trump, who utterly lacks a filter, Pence is very precise in his language. He is keenly aware of optics, and, as I have observed previously, content to let Trump take the credit while operating under the illusion of having less power than he actually has.

His vigilant precision is apparent in the rest of the exchange, too: He repeats that Michael G. Flynn "has no involvement in the transition whatsoever." It sounds ludicrous, given that Flynn has a transition email — but it was also most likely technically correct when Pence said it.

Hours after his appearance, the Trump communications director confirmed that Flynn had been playing a role in the transition, but was no longer involved.

Trump communications director Jason Miller said in a phone call with reporters that Michael G. Flynn “was helping his father with some administration and scheduling duties early on in the transition process and he is no longer involved with transition efforts.”

He did not specify when Flynn's involvement in the transition had ended.

Pence was evasive, but accurate. He did not deny that Flynn had been a part of the transition team; he simply stated that he was not involved in the transition team, leaving casual viewers with the impression that perhaps he never had been.

And the Morning Joe team let him get away with it. They will not be the only ones to let Pence sneak by with his surgical language and technical truth. Which is why we must redouble our efforts to pay attention to this very powerful vice-president-elect.