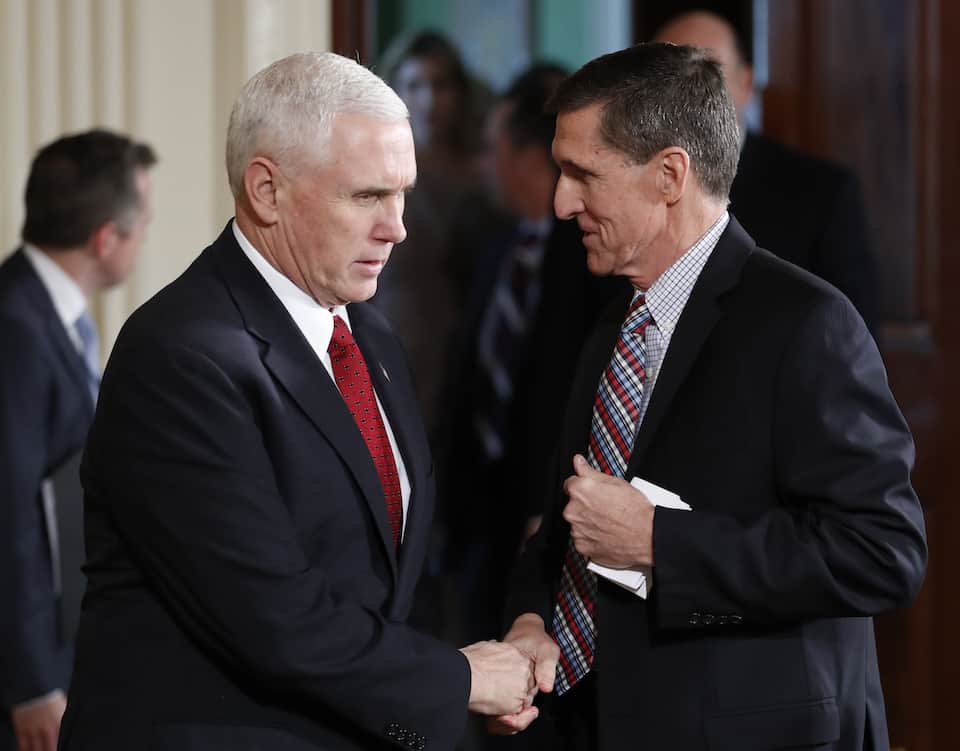 Donald Trump's transition team vetted Michael Flynn and knew about his financial ties to foreign governments, but approved him for a sensitive national security position anyway. And Vice President Mike Pence, who was in charge of the entire process and lied about it afterwards, has finally been implicated in this growing scandal.

The Trump administration is digging itself in even deeper over the scandal surrounding former National Security Adviser Michael Flynn.

In addition to his contacts with the Russian government, including being paid several thousand dollars for an appearance on state-owned television and his attendance at a dinner party with Vladimir Putin, Flynn also lobbied on behalf of the Turkish government. He later registered as a foreign agent after he was removed from the Trump administration.

Back in March, speaking to Fox News, Vice President Mike Pence claimed that he was just then learning the news, saying, "Hearing that story today was first I heard of it."

BAIER: Former National Security Adviser Michael Flynn has filed with the Department of Justice as a foreign agent for making more than $500,000 as a lobbyist, essentially, for Turkey. Your reaction to that, considering that — doesn't that mean, Mr. Vice President, that even if he didn't lie to you about what the Russian ambassador said or didn't say, that you would have had to fire him anyway?

PENCE: Let me say, hearing that story today was the first I heard of it. And I fully support the decision that President Trump made to ask for General Flynn's resignation.

BAIER: You're disappointed by the story?

PENCE: First I heard of it, and I think it is an affirmation of the President's decision to ask General Flynn to resign.

But this is demonstrably false, as MSNBC's Rachel Maddow laid out on her show.

Pence took over as head of the presidential transition team from disgraced Gov. Chris Christie in early November 2016. A week later, Rep. Elijah Cummings (D-MD), the Ranking Member of the House Committee on Oversight and Government Reform, sent Pence a letter in response to news reports that Flynn had lobbied on behalf of a foreign entity, requesting more information on Flynn's business dealings and partners.

White House officials later admitted to the Associated Press that they knew that Flynn would have to register as a foreign agent before he officially became the National Security adviser.

NBC News also reports that the Trump transition team — led by Pence — did do a background check on Flynn before they approved him for his position in the administration, with a source telling the network it was done "very casually." The Trump team was aware of Flynn's work for the Turkish government after he wrote a column for The Hill arguing in favor of the government's interests — which was published on election day. Flynn was hired anyway.

Yet, as part of their "blame Obama" strategy, Press Secretary Sean Spicer claimed that no background check was done. In his daily press conference, Spicer asked, "Why would you re-run a background check on someone who was the head of the department — the Defense Intelligence Agency that had and did maintain a high-level security clearance?"

Trump parroted the false story, telling Fox News, "So when he came into our administration for a short period of time, he came in, he was already approved by the Obama administration and he had years left on that approval."

The Trump administration cannot get its story straight on Flynn and foreign ties, dissembling as they have so often, while feeding the public a fake story to excuse their missteps.