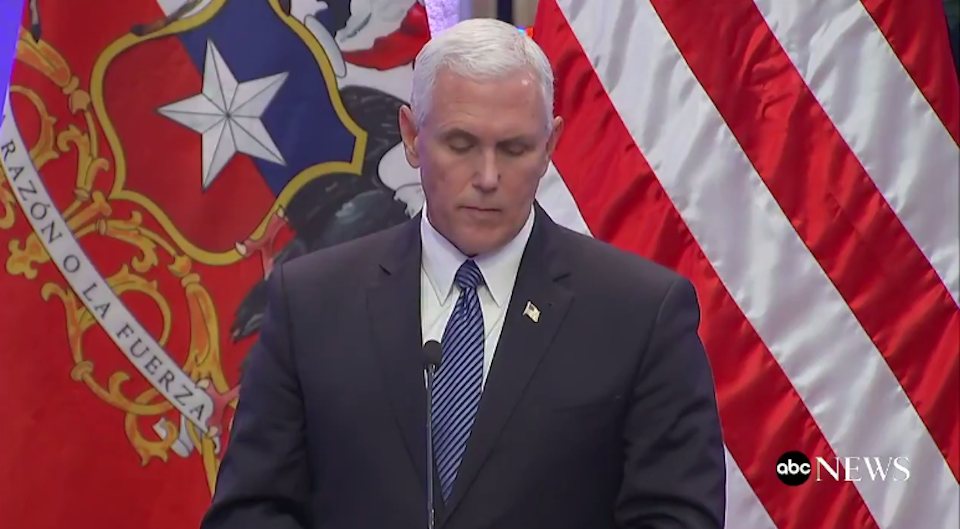 It is increasingly impossible for Mike Pence to distance himself from the disaster that is Donald Trump's presidency.

There are no good options for Mike Pence, but standing with Donald Trump after he quadrupled down on his defense of white supremacists and Nazis is certainly not a wise choice.

During a very brief press availability in Chile Tuesday, Pence had the opportunity to disavow Trump's shocking embrace of the hate groups that rioted in Charlottesville, Virginia.

He failed to do so.

REPORTER: Remarks made by President Trump yesterday about the violence in Charlottesville, Virginia, alarmed many Americans, including Republican supporters. Do you agree with the president that there were good people among the white supremacist protesters, and that there was blame to be had on both sides? And more broadly, sir, do you believe that Confederate statues should be removed, as is happening in many cities across the south? Or do you agree with the president that the Confederate general, Robert E. Lee, should be considered in the same pantheon as George Washington?

Those should not be difficult questions to answer. Those remarks of Trump's have already led to widespread condemnation, his economic advisory board disbanding in protest, and deafening silence from Republican leaders who have chosen not to follow the advice and talking points from the White House.

For Pence, though, it was not so easy. After several seconds of incredibly awkward silence, Pence said, "What happened in Charlottesville was a tragedy. And the president has been clear on this tragedy, and so have I."

Then Pence uttered the words that could well seal his fate and forever doom his hopes of one day — perhaps sooner rather than later — being elected to the presidency.

"I stand with the president," he said.

.@VP responds to Trump's comments that there were “fine people” among white supremacist groups and "blame on both sides" in Charlottesville. pic.twitter.com/GFwRvEUGF9

Pence then launched into a four-minute speech about his meetings and efforts in Latin America, and then ended the press conference without taking any further questions.

Pence is cutting his trip short to return to the United States Thursday, and while the White House has not offered any reason for the sudden schedule change, it is not hard to imagine that Trump's multi-day meltdown and the rapid collapse of his presidency and any support he might have still had has something to do with it.

Whatever happens next in this disastrous era of the Trump presidency, Pence has stood by him and supported him and even lied to protect Trump's administration.

It seems inevitable Trump will go down in history as one of the most unpopular and failed presidents. Apparently, Pence is determined to go down with him.