Home National Pence sends flack to reassure Fox News he has nothing to do...
Support progressive journalism.
Donate today 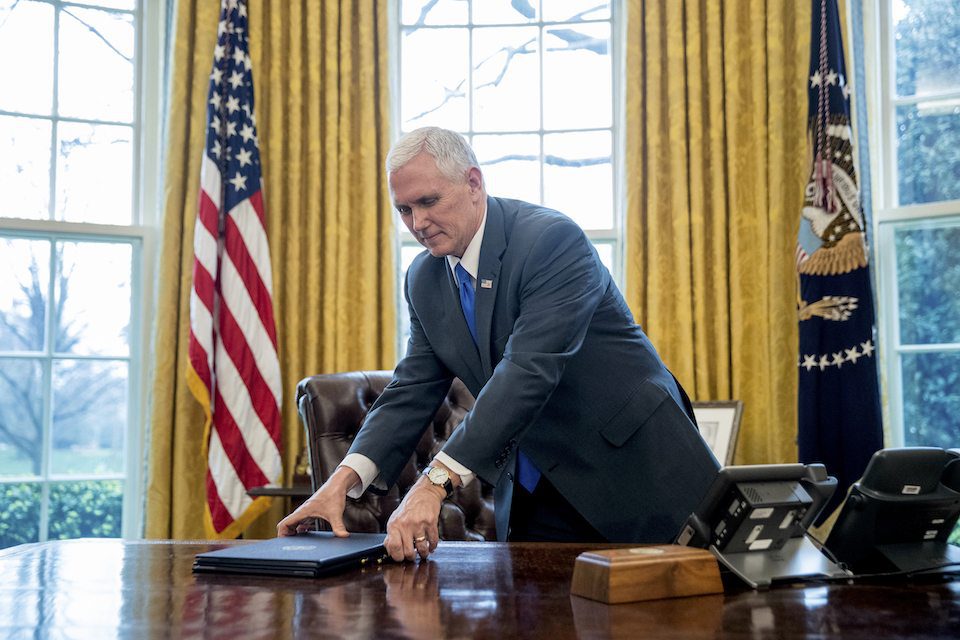 Mike Pence sent his press secretary to Fox News to continue Pence's campaign of distancing himself from Donald Trump, but even his flack ran into questions he couldn't answer about Pence's contacts with Russian operatives.

Mike Pence wants America to believe that he had nothing to do with the Trump team's scandal involving contacts with Russian operatives during the presidential campaign. He particularly wants Fox News viewers, who are a key constituency in picking and supporting the next Republican presidential nominee, to be aware of this version of events.

To further this cause, Pence sent Marc Lotter, his press secretary, for an unusual appearance on Fox News' "America's Newsroom." On-camera interviews with the vice president's media flack aren't the standard way of doing things, but Lotter's time on the pro-Trump propaganda network comes as Pence is engaged in a concerted effort to separate himself from his boss. And his boss's family.

The Lotter interview came the morning after Donald Trump Jr. sat down with Trump cheerleader Sean Hannity to try and help extricate the Trump administration from the Russia story, but it did not go well, with the younger Trump conceded he may have met with even more Russians.

Lotter ran into trouble as well. He was unable to successfully answer a question from anchor Bill Hemmer about whether Pence had met with Russians during the campaign. Instead, he said such questions were "stuff that the special prosecutors and the counsels are all looking at." Pressed again, Lotter said he was "not aware" of such meetings.

HEMMER: Did the vice president ever meet with representatives from Russia?

LOTTER: The vice president is not focused on the areas where — on this campaign — especially things that happened before he was even on the ticket. As he has said that when joined the campaign, his entire focus was on talking to the American people, taking the case that President Trump was going to make to the American people, and doing everything that he could to make sure that he and President Trump were elected and sent to Washington. Now his focus is getting that agenda accomplished.

HEMMER: Fully aware of the statement there. Just come back to this question: If it wasn't a private citizen from Russia, did he ever meet with representatives from the Russian government during the campaign?

LOTTER: That's stuff that the special prosecutors and the special counsels are all looking at. I can tell you that in all my time with the vice president, I knew that he was focused entirely on talking to the American people, taking his case to the American people, and making sure that the people knew why they needed to send President Trump and Vice President Pence to Washington, and now they're working on enacting that agenda.

LOTTER: I'm not aware of anything that I have seen. All of the focus that I saw with Vice President Pence during the campaign and since then has been focused on working the agenda that the people send him to Washington to accomplish. That's what the vice president is doing, that's what the president is doing. We're seeing the results today. We're seeing jobless — jobs being created. Border crossings down. ISIS on the run and near defeat. Those are kind of things that that the American people are focused on.

Pence was head of the vetting process that brought Mike Flynn into the administration as Trump's national security adviser, despite multiple red flags about his contacts with foreign powers. Contrary to Pence's actions and statements now, he was a co-conspirator in the Trump team's activities on Russia.

And he is running a shadow presidential campaign, appearing in swing states, speaking to millionaire donors, and using his press shop to distance himself from the president he serves under.

It remains to be seen if anybody will be fooled by Pence's act.