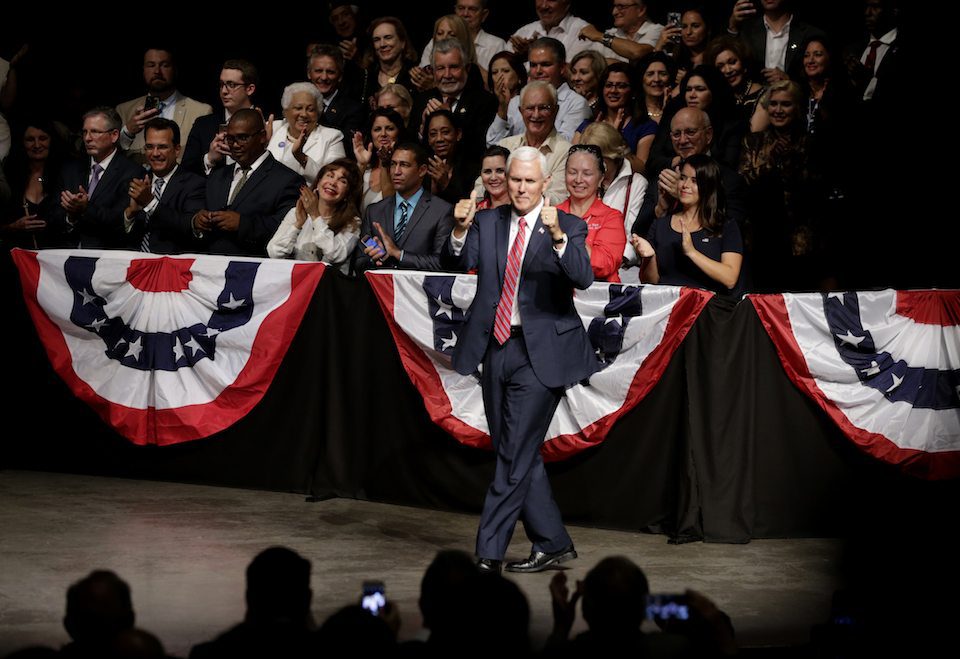 Mike Pence is planning a Latin America trip with a bigger entourage than President Barack Obama had, once again highlighting his attempt to undermine Donald Trump with a shadow presidential campaign.

Mike Pence strenuously insists, despite considerable contrary evidence, that he is not running a shadow campaign to take over as president from Donald Trump. But new reporting reveals that Pence is making preparations for a high-profile trip to Latin America with an unprecedented, presidential-level entourage.

The State Department has reportedly submitted a request for "nearly 700" visas for the security and protocol teams accompanying Pence for his trip down south, according to diplomatic sources. Newsweek describes the size of the request as "unprecedented" for a vice presidential trip. According to one source, the Pence entourage will be larger than "the advance teams for President Barack Obama’s trip to Brazil, Chile and El Salvador combined in 2011."

The immense size of the Pence entourage is especially strange for a vice president. Juan Gonzalez, a former aide to Vice President Joe Biden, told Newsweek that his largest team for a trip to Latin America was "120 people." Pence's team would be a 483 percent increase in size.

Another former Obama White House official said the size of the Pence team was "insane."

Late night comedian Jimmy Kimmel pointed out, in a parody Pence 2020 ad, just how much foreign trips and the trappings of international travel are a part of how Pence has created a presidential aura around him. Now reality seems to be keeping up pace with comedy.

When cornered, Pence's team won't directly rule out a 2020 run, yet their public attacks on reports of their preparations seem to hint at a fear of reprisal from Trump. He has recently attacked his attorney general and Senate Majority Leader Mitch McConnell for perceived disloyalty. A Pence backlash could perhaps be even more vicious than those tongue lashings.

Pence and his entourage are sure to make an international splash, and if Trump's favorite TV show, "Fox & Friends," covers it, it might trigger the biggest Twitter meltdown that has ever been seen.