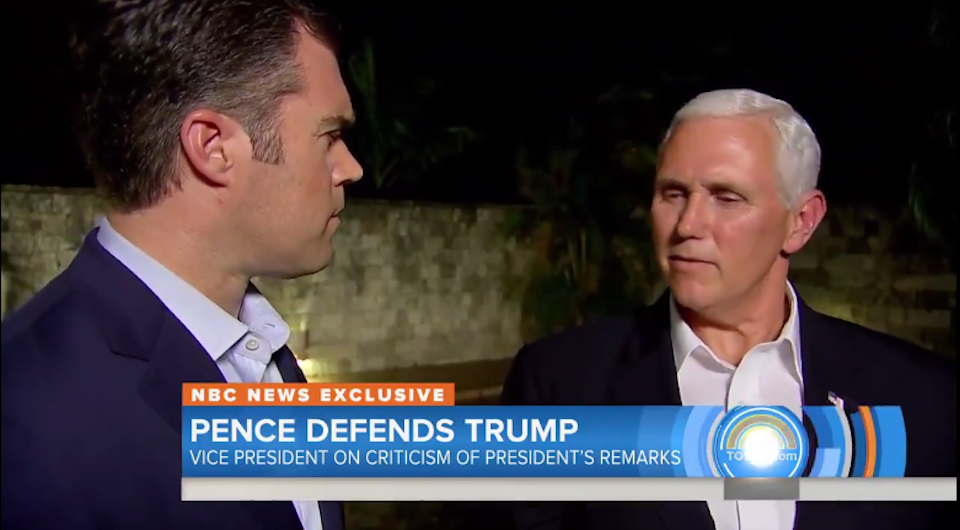 Mike Pence tried to clean up Donald Trump's refusal to directly condemn the racial violence in Charlottesville, Virginia, but he ended up blaming the media.

Mike Pence continued his attempt to cover up for Donald Trump's refusal to directly rebuke racial terrorism committed in his name, but when challenged by a reporter on his claim that Trump had forcefully spoken out, he instead complained about "many in the media."

Trump has refused to call out the white supremacists and Nazis who rioted in Charlottesville, Virginia, and who killed a young woman. Instead he referred to "many sides" being involved in the case.

In response, a visibly disturbed Pence insisted that Trump had made his point clear, but Alexander noted that even Trump's fellow Republicans, like Sen. Orrin Hatch of Utah, have called out Trump for his immoral and inadequate response to the attack.

PENCE: President Trump, yesterday, stated clearly that he condemns hate and violence in all of its forms. We will not tolerate hatred and violence of groups like white supremacists or KKK or the neo-Nazis. These extremist, fringe groups have no place in the American debate.

ALEXANDER: But you said —

PENCE: And we condemn them in the strongest possible terms.

ALEXANDER: You say that, why won't the president use those same words? Why hasn't he?

ALEXANDER: To be fair, some Americans heard that, others didn't, including Orrin Hatch who wrote, "We should call evil by its name. My brother didn't give his life fighting Hitler for Nazi ideas to go unchallenged here at home." Was it a mistake for the president not to more clear when he made those remarks, and if you were advising him now, would you suggest he do it differently?

PENCE: I think the president yesterday spoke into a national moment. Words that the American people needed to hear. That we condemn acts of violence, acts of hatred.

ALEXANDER: He said on "many sides." Name those sides. What are the sides?

PENCE: Well, look, as I said today, we condemn, in the strongest terms, the hate and violence advocated by groups like white supremacists, neo-Nazis, and their ilk.

ALEXANDER: Well that's one side, what's the other side, when he says on "many sides"?

PENCE: Well, as you look throughout the course of recent years, we've seen protests turn violent. We've seen fringe groups use peaceful protest environment to bring violence, in some cases against police officers.

ALEXANDER: But only one group yesterday, Mr. Vice President, killed an American.

PENCE: And we're bringing the full weight of the federal government to bear on investigating and prosecuting that individual for that heinous act that took the life of that innocent woman. I will tell you Peter that I take issue with the fact that many in the media are spending more time criticizing how the president addressed the issue —

ALEXANDER: But this is Orrin Hatch and Cory Gardner, sir. It's not me. I'm reading their quotes.

This isn't the first time Pence has put himself in the role of batting clean-up in service of Trump's bigotry. When Trump refused to directly condemn the anti-Semitic attacks on Jewish cemeteries — after a statement on Holocaust Remembrance Day omitting references to Jewish victims of the ethnic cleansing — the White House responded by  sending Pence to the site in order to take some of the heat off Trump.

The strategy of evasion and misdirection won't change the fact that Trump's bigotry has again been exposed and revealed. He continues to live down to his own rhetoric, while refusing to condemn a major source of his support. Mike Pence cannot fix that.