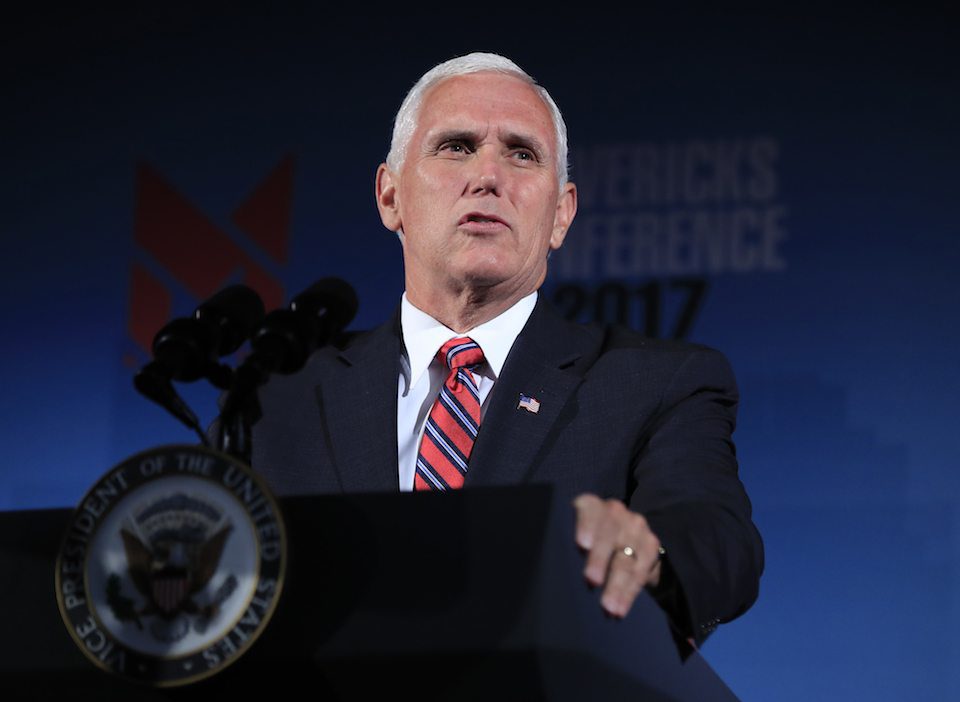 Mike Pence told an audience of veterans and Gold Star families that Trump will make sure troops in the field have all the support they need to fight terror, but the doomed Niger mission didn't.

Mike Pence told an audience of veterans and Gold Star families that the Trump administration would provide deployed military the "support" they need to confront America's enemies, but that isn't what happened to the four soldiers murdered in Niger.

Pence was speaking at an event commemorating the 34th anniversary of the attack on the U.S. Marine barracks in Beirut, Lebanon in 1983 that killed 241 U.S. military personnel.

He told the audience that he had "confidence" that under Trump, " the armed forces of the United States will have the support they need to confront our enemy and win."

PENCE: At this very hour, around the globe, thousands of brave Americans are defending our freedom from the forces of terror. And to them, and to all of you I say with confidence: under this commander in chief, the armed forces of the United States will have the support they need to confront our enemy and win.

But when the mission in Niger was greenlit by Trump, the military had already warned that it did not have adequate support.

In the months before the attack  the military had requested the presence of drones, other surveillance aircraft, and additional military medical support to back up operations in Niger, but those requests were denied.

The mission went ahead anyway, and the soldiers were ambushed and killed by forces believed to be associated with ISIS.

Pence has a son in the Marines, but that isn't giving him pause before pushing the company line on this story despite the danger facing American soldiers under Trump.

He also told the audience that ISIS is "on the run" even though intelligence did not see the attack on the doomed mission coming. The Trump administration is in victory lap mode, issuing a press release over the weekend touting success against ISIS, even as American victims of their attacks are being buried.

Americans need to know why the soldiers killed in Niger didn't have the support they needed to survive, and why Sgt. La David Johnson's body was left behind. His widow, Myeshia Johnson, despite being personally attacked by Trump, has publicly stated that she wants answers and pointed out that the military is not being responsive to her.

Hollow, dismissive promises of support to soldiers in the field from Mike Pence while covering for Donald Trump are not sufficient. The public and the military defending their freedoms deserve better.