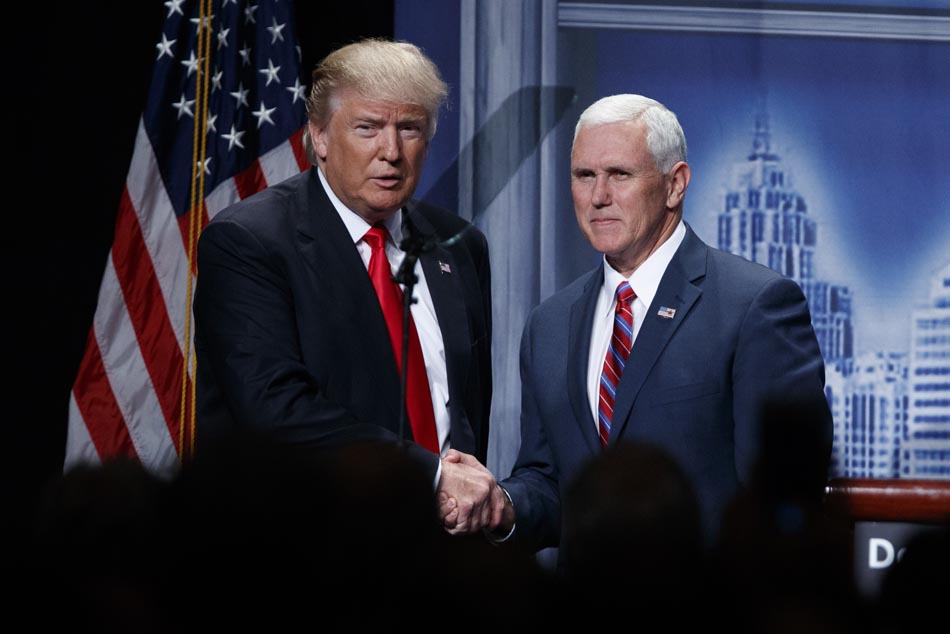 In 2016, Mike Pence condemned Donald Trump's admission of sexual assault — and then got right back on the campaign trail. But now we know he was secretly planning a "coup" to take over the Republican ticket.

During the presidential campaign, Mike Pence went from condemning Donald Trump's admission of grabbing women without their consent to shilling for him just two days later. But a new report reveals that he was planning a "coup" to take over the Republican nomination.

Despite publicly standing by Trump, Pence has continued to prepare himself for a takeover of the ticket. Just in case.

After the infamous "Access Hollywood" recording of Trump admitting to sexual assault was released, Pence publicly rebuked him. On Oct. 8, 2016, Pence released a statement describing himself as "offended by the words and actions described by Donald Trump."

Two days later, on Oct. 10, Pence was back on the campaign trail and praising Trump at a rally as a man "who never quits."

The Atlantic now reports that during that weekend, Pence was involved in backroom scheming to get himself installed at the top of the ticket. The outlet describes Pence as "contemplating a coup," and according to several Republican sources, "Pence made it clear to the Republican National Committee that he was ready to take Trump’s place as the party’s nominee."

So while he returned to the trail and played the good soldier for Trump — as he often does now — Pence was looking for a crack in Trump's armor to exploit and utilize to vault himself into control.

Based on multiple actions he has taken while serving as Trump's vice president, there is ample evidence Pence has continued to operate in this mindset.

He has been building and operating an independent political operation, separate from Trump in a manner that is unusual for vice presidents.

Pence established his own political action committee (PAC), the Great America Committee, which he uses to bolster the campaigns of Republicans across the country. This is a vehicle often used by presidential candidates to ensure support from those candidates in a future run.

Instead of hiring someone with an inclination toward legislating, as most vice presidents do, Pence hired political operative Nick Ayers to be his chief of staff.

He has been hosting get togethers with well-heeled Republican donors at the vice presidential residence. These are the types of figures who would help to bankroll a presidential campaign.

Pence has also kept up a travel schedule that takes him to battleground states where he has met and praised governors, senators, and other high-ranking Republican officials whose help he would need in a future campaign.

There are multiple crosswinds battering the Trump administration. He has always been unpopular, and over the last year, his approval ratings continue to collapse.

At the same time, the Russia investigations are proceeding with the special counsel Robert Mueller, the FBI, and in the House and Senate. Two Trump associates have pleaded guilty to crimes and are cooperating with Mueller's investigation.

Trump's corrupt business practices, using the office to enrich himself and his family, continue to be revealed as he faces lawsuits and investigations over them.

The prospect of an impeachment constantly looms over Trump's presidency.

There is a fly in the ointment for Pence, however. He does not have distance from the Russia scandal. He stands right in the middle of it. He headed the presidential transition that vetted Mike Flynn and approved him to be Trump's national security adviser. The multiple warnings about Flynn's financial ties to foreign governments were on Pence's desk, despite his later denials.

All of Pence's Machiavellian plotting, which we now learn was in operation before Trump even won the election, may be for naught.

If Trump collapses, Pence is most likely going down with him too.