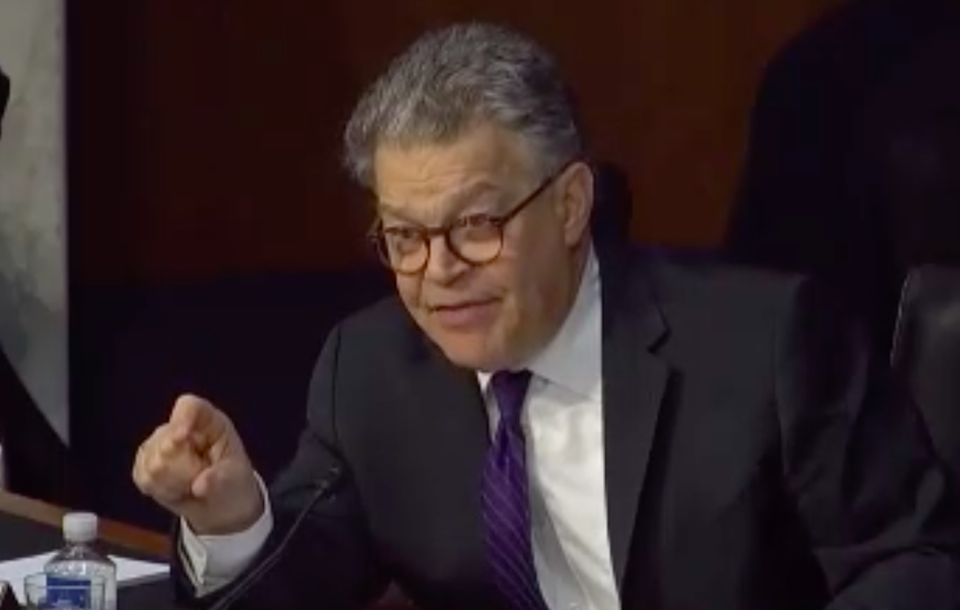 Facebook's lawyer offered tepid and pathetic excuses for the social media site's role in disseminating Russian propaganda. Sen. Al Franken was having none of it.

Minnesota Democratic Sen. Al Franken absolutely demolished Facebook for its role in disseminating Russian propaganda and disinformation during the 2016 election during a congressional hearing on the topic.

At a Senate Judiciary Subcommittee on Crime and Terrorism hearing on Russia's use of technology and social media to spread propaganda, Franken asked Stretch why Facebook was unable to "make the connection that electoral ads paid for in rubles were coming from Russia," citing the company's infamous ability to make thousands of connections to define its users and gigantic audience.

Stretch was evasive and defensive, describing the linkage as simply "signals we missed."

In response, Franken, growing visibly irritated with Stretch's responses, reiterated that "People are buying ads on your platform with rubles," Russia's national currency.

Yet despite platforms like Google and Facebook being "the most sophisticated things invented by man," they somehow managed to miss these obvious signs.

FRANKEN: How did Facebook, which prides itself on being able to process billions of data points and instantly transform them into personal connections for its users, somehow not make the connection that electoral ads paid for in rubles were coming from Russia? Those are two data points. American political ads and Russian money, rubles. How could you not connect those two dots?

STRETCH: Senator, you mentioned one aspect of the Russian threat, that was so visible in 2016, which was the question of account compromising, stealing content and disseminating them and that's a threat our security team was intensely focused on and we think effectively addressed. I think, in hindsight, we should have had a broader lens. There were signals we missed. And we are now –

FRANKEN: OK. People are buying ads on your platform with rubles. They're political ads. You put billions of data points together all the time. That's what I hear that these platforms do. They're the most sophisticated things invented by man. Ever. Google has all knowledge that man has ever developed. You can't put together rubles with a political ad and go like, "Hmm, those two data points spell out something bad?"

STRETCH: Senator, it's a signal we should have been alert to and in hindsight, it's one we missed.

Facebook, Twitter, and Google have all come under intense scrutiny for their roles in aiding dissemination of propaganda supporting Donald Trump during the presidential election, with recent data indicating that millions of people saw their misinformation.

Those numbers dwarf the 77,744 votes that determined the outcome of the race in three states — Michigan, Pennsylvania, and Wisconsin — and could have swung the entire election.

Virginia Democratic Sen. Mark Warner has proposed legislation that would make these companies at the very least disclose who is funding political advertising on their networks. But for the type of misinformation and lies that spread across their networks in the last race to be dealt with, they have to be even more proactive and vigilant.

And Facebook's evasiveness under Franken's tough scrutiny shows that there is a long road ahead, and Russia is still in the driver's seat.