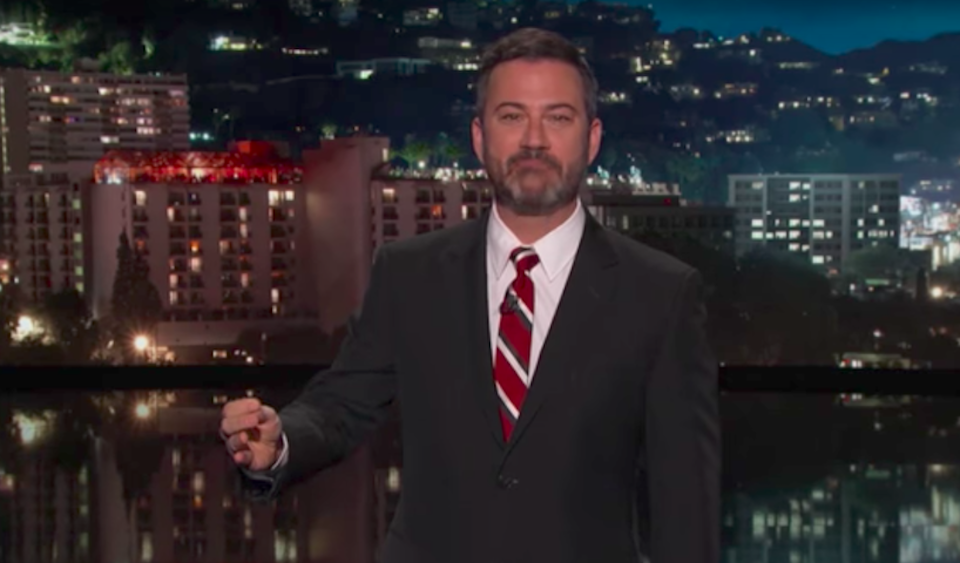 The ABC host and father won't be intimidated by the GOP or Fox News as they try to silence his passionate health care advocacy.

Late night host Jimmy Kimmel isn’t backing down from his fight to save health care for millions of Americans in the face of Republican attacks. And Wednesday night, Kimmel widened his battle to include Fox News, as the host called out morning host Brian Kilmeade for his gaping hypocricy.

It’s all part of an unfolding spectacle that pits the GOP against everybody in the heated health care debate, since there’s virtually no outside groups or institutions that support the Republican effort to repeal Obamacare.

On Tuesday night, Kimmel hijacked that health care debate with a six-minute smackdown of the GOP, and specifically Sen. Bill Cassidy (R-LA.), whom Kimmel accused of flat out lying to the host’s face over the summer when he pledged he’d only support health care legislation that was fair and equitable. It was Cassidy who coined “The Jimmy Kimmel Test” for judging a potential health care bill. (Kimmel’s son faced heart complications at birth this summer, which sparked the host’s advocacy.)

The effort Cassidy it now trying to jam through Congress without hearings or debate pretty much represents the opposite of the Kimmel test. “We can't let them do this to our children, our senior citizens, our veterans, or to any of us," the host stressed Tuesday night, while addressing Cassidy. “There’s a new Jimmy Kimmel test for you. It’s called the lie detector test. You’re welcome to stop by the studio and take it anytime.”

On Wednesday night, Kimmel returned to the topic, unloading on Fox News’s Brian Kilmeade who was part of an orchestrated effort to attack Kimmel and his health care activism. On “Fox & Friends,” Kilmeade mocked “Hollywood elites like comedian Jimmy Kimmel” who were “pushing their politics on the rest of the country.”

Kimmel wasn’t having it:

Oh, he’s such a fan — I think he’s been on the show. He follows me on Twitter; he asked me to write a blurb for his book, which I did; he calls my agent looking for projects. He’s dying to be a member of the Hollywood elite. The only reason he’s not a member of the Hollywood elite is because nobody will hire him to be one. And you know, the reason I’m talking about this is because my son had an open-heart surgery, then has to have two more, and because of that I learned that there are kids with no insurance in the same situation. I don’t get anything out of this, Brian, you phony little creep. Oh, I’ll pound you when I see you. That will be my blurb for your next book: ‘Brian Kilmeade is a phony little creep.’

Jimmy Kimmel's full monologue from tonight. Over to you, @BillCassidy. https://t.co/vVmorE7NIw v