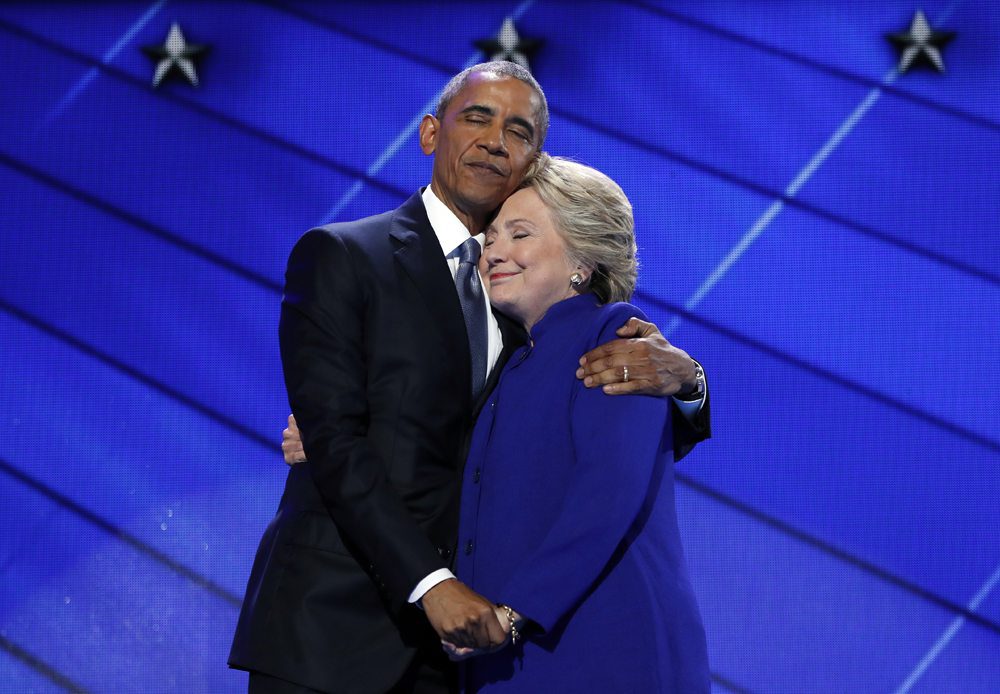 If there's anyone who knows about previously insurmountable hurdles along the path to the presidency, it's the person who broke the 220-year history of only white men holding the office. On Sunday, President Obama acknowledged the systemic gender bias confronting Hillary Clinton on her journey to become the first woman elected to the U.S. presidency.

At a DNC fundraiser for Hillary Clinton, President Obama said:

There's a reason why we haven't had a woman president; that we as a society still grapple with what it means to see powerful women. And it still troubles us in a lot of ways, unfairly, and that expresses itself in all sorts of ways.

Like, as but one example, the ways in which women are obliged to conceal emotion can be translated as being cold, as Clinton herself recently addressed in a Humans of New York feature. It's one of the less obvious ways in which gender bias plays a role in politics (and every other arena), alongside the more visible double-standards like endless discussions about one's sartorial choices.

This is not the first time that President Obama has spoken out thoughtfully about the gendered challenges Clinton faces. During a January interview with Glenn Thrush, he recalled the tight primary contest they ran as competitors in 2008, saying she "had a tougher job throughout that primary than I did."

"She had to do everything that I had to do, except, like Ginger Rogers, backwards in heels,” he said. “She had to wake up earlier than I did because she had to get her hair done. She had to, you know, handle all the expectations that were placed on her."

It's a line he ad-libbed again during his address at the Democratic National Convention, at which Clinton got her historic nomination.

(Obama is also not the only of Clinton's competitors to acknowledge the gender bias she faces: Her 2016 primary rival, Bernie Sanders, has also said: "I don’t know that a man would be treated the same way that Hillary is. Some of it is sexist.”)

As if to perfectly demonstrate the President's point about the double-standard by which Clinton is judged, Donald Trump was waxing incredulous about having to spend his weekend doing some work while running for the U.S. presidency:

It's not difficult to imagine the response if Clinton had publicly complained about having to give up a couple of hours of her weekend to bone up on trade deals. Which is to say nothing of the fact that criticizing trade deals has been a central part of Trump's campaign, so it's a curious admission that he's only "studying" them now.

Clinton is expected to be—and is—more extemporaneously conversant on a vast slate of policy issues than any other presidential candidate, while her opponent can casually joke about having to give up his weekend to study up on one of his signature issues, and it merits almost zero attention.

This is gender bias in action. Just one of the many ways it has been reflected, over and over, throughout this campaign.

It shouldn't be special that a man as prominent as the President sees fit to call it out, but it is. Which is the most compelling argument for why calling it out is still so necessary.