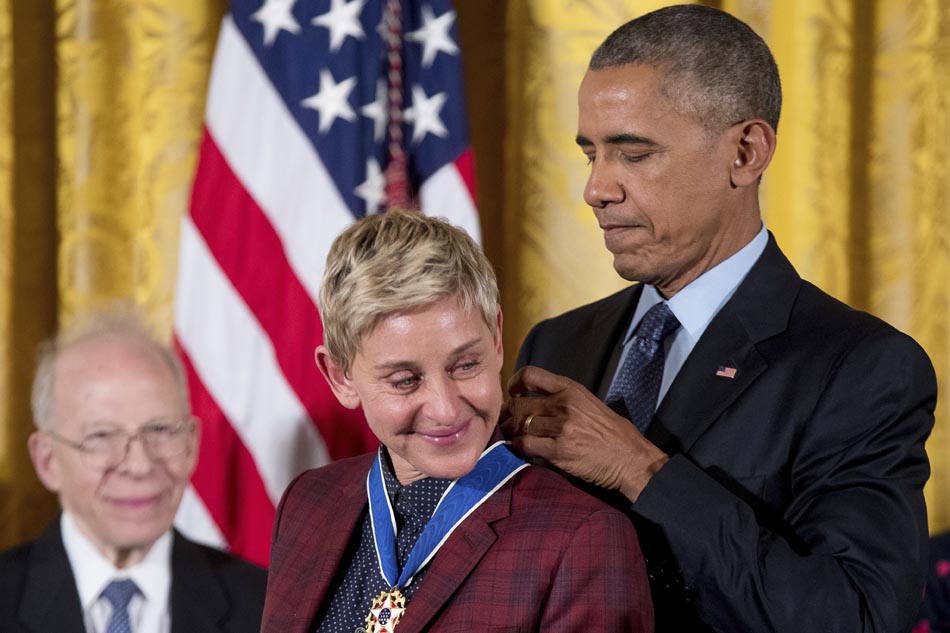 Along with 20 other eminent honorees, Ellen DeGeneres was awarded the Presidential Medal of Freedom by President Obama. It is the highest honor a U.S. civilian can receive. The ceremony is often moving, but Obama's tribute to DeGeneres was something special.

Amidst an onslaught of troubling news, it was a welcome sight to see President Obama awarding comedian Ellen DeGeneres the Presidential Medal of Freedom, speaking admiringly of her courage in risking her career to come out and of her special gift for connecting people.

"It's easy to forget now, when we've come so far, where now marriage is equal under the law," the President said, "just how much courage was required for Ellen to come out on the most public of stages almost twenty years ago. Just how important it was — not just to the LGBT community, but for all of us."

Ellen, he added, pushed "our country in the direction of justice. What an incredible burden that was to bear, to risk your career like that. People don't do that very often. And then to have the hopes of millions on your shoulders. But it's like Ellen says: We all want a tortilla chip that can support the weight of guacamole."

The crowd laughed. Ellen laughed. "Which really makes no sense to me," said Obama, to more laughter. "But I thought it would break the mood, because I was getting kind of choked up."

And then this happened, and Ellen got choked up. (And so did I.)