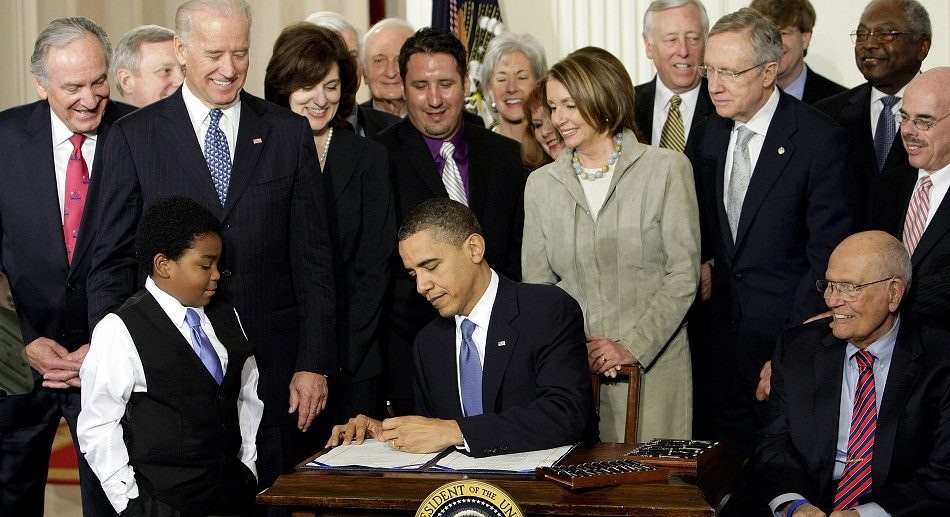 On Thursday, President Obama offered a concise and important explanation of how all Americans benefit from the Affordable Care Act, even if they do not know it.

Health care is a personal issue for every American. For me, it has always been doubly so because I came to journalism after a career as a health insurance consultant.

So I was thrilled with President Obama's speech on the Affordable Care Act on Thursday, in which he acknowledged some of the flaws in the law, but then brilliantly and simply laid out four ways to improve it. He also knocked down Republican critics who relentlessly try to repeal it without offering any ideas of their own to replace it, and whose dire predictions of doom for American health care never materialized.

Most urgently, though, President Obama described the ways in which every single American is better off under Obamacare, and that eighty percent of them enjoy those benefits without any trade-off at all:

So you’re getting better quality even though you don’t know that Obamacare is doing it.

THE PRESIDENT: Thanks, Obama. (Laughter and applause)

Because of the law, your annual out-of-pocket spending is capped. Seniors get discounts on their prescription drugs because of the law. Young people can stay on their parents' plan, just like Amanda did, because of the law. (Applause) And Amanda was able to stay on her parents' plan and then get insurance after she aged out, even though she has what used to be called a preexisting condition, because we made it illegal to discriminate against people with preexisting conditions. (Applause)

By the way, before this law, before Obamacare, health insurance rates for everybody — whether you got your insurance on the job, or you were buying it on your own — health insurance rates generally were going up really fast. This law has actually slowed down the pace of health care inflation. So, every year premiums have gone up, but they've gone up the slowest in 50 years since Obamacare was passed. In fact, if your family gets insurance through your job, your family is paying, on average, about $3,600 less per year than you would be if the cost trends that had existed before the law were passed had continued. Think about that. That's money in your pocket.

Now, some people may say, well, I've seen my co-pays go up, or my networks have changed. But these are decisions that are made by your employers. It's not because of Obamacare. They're not determined by the Affordable Care Act.

This passage carries much urgency, because it is the 80% of people who benefit from Obamacare and do not know it who will decide what happens to the 20% who were left out under the old system. Donald Trump, hewing to the GOP talking point, wants to "repeal and replace" the Affordable Care Act, while Hillary Clinton will work to improve it. That 80% of the population needs to understand the importance and the reality of the law when they enter the voting booth in November.

Health insurance in the United States is a complicated issue and it is easy for politicians to confuse people and rile them up. Opponents of the law, and of health care reform in general, count on these reactions. But Obama countered the prevalent misconceptions on every count. He laid out everything thoroughly and succinctly, so that anyone listening could understand.

It makes me upset that he has been doing this — explaining the law clearly, effectively, and patiently, and refuting the absurd and inaccurate claims made about it by conservatives  — from the early stages of the law's formation, yet so many Americans still do not know the truth.

They know about one guy's premiums going up, or another guy who can't see the doctor he likes anymore because the doctor decided he wants to make more money, or they just hear lies. And those lies are fed to them by the Republican Party and by much of the corporate media, to the detriment of all of us.

Obamacare is improving and saving millions of lives. The President has tried to tell us, but even he cannot always make himself heard over the lies and spin of his Republican opponents.

During a campaign event promotion for his hotels at the Trump National Doral Miami resort Tuesday, the GOP nominee seized on the news that health insurance premiums on the Affordable Care Act’s exchange marketplaces are going up by a lot for some people next year.

But naturally, instead of just using this information to criticize the law and propose something better (or “something terrific,” as he’s fond of saying), Trump opted to go a little nuts. Like with seemingly everything else, Trump appears incapable of just accepting the facts.