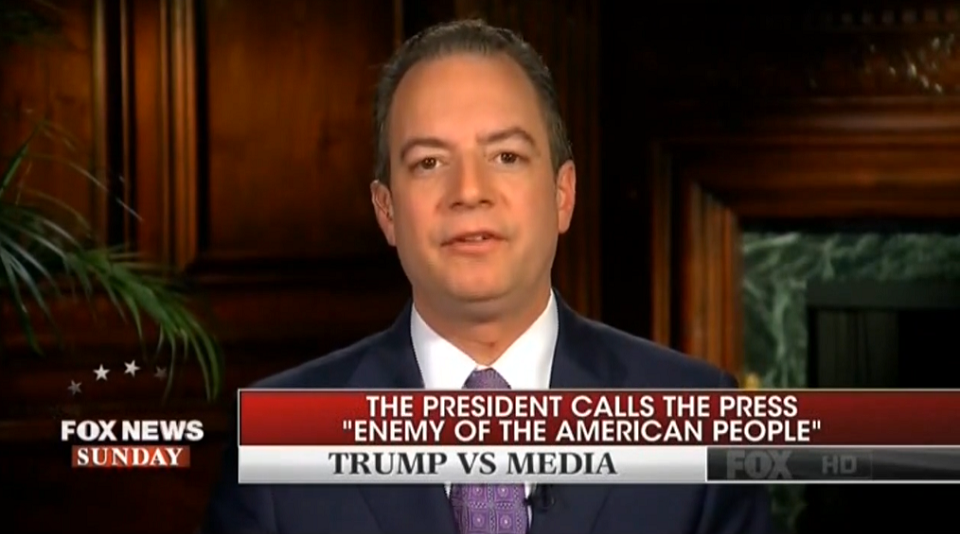 On Fox News Sunday, White House Chief of Staff Reince Priebus said reporting of "constant contact" between the Trump campaign and Russia is "grossly overstated." While Priebus tried to better parse himself in the remainder of the interview, he never actually denied that there was, indeed, some contact.

Following the resignation of National Security Advisor Michael Flynn, who was caught in a lie regarding his contact with a Russian ambassador, Trump, White House counselor Kellyanne Conway, and Press Secretary Sean Spicer have all offered varied and at times contradictory statements regarding Flynn — particularly, what exactly occurred regarding Russia during the 2016 campaign, who knew about it, and when did they know it.

Now White House Chief of Staff Reince Priebus has appeared to make things worse for the administration. While at first glance, his answers in an interview with Chris Wallace on Fox News Sunday may appear to be an adamant denial of the recent New York Times bombshell report that there were repeated and direct contacts between high level Trump campaign officials and Russia, a closer look reveals that Priebus may have dug the administration even deeper.

Notably, before attempting to push back on the Times' report, Priebus described the content of that article in terms he was was presumably prepared to deny:

The New York Times, last week, put out an article with no direct sources that said that the Trump campaign had constant contacts with Russian spies, basically, you know, some treasonous type of accusations. We have now all kinds of people looking into this. I can assure you and I have been approved to say this — that the top levels of the intelligence community have assured me that that story is not only inaccurate, but it’s grossly overstated and it was wrong. And there’s nothing to it.

His specific use of the phrase "constant contacts" — especially when the New York Times article actually used the word "repeated" — appears purposeful, especially since he later called the story "grossly overstated." The implication is that the reporting exaggerated, rather than wholly fabricated, accounts of contact between the Trump team and Russia.

Moments later, Chris Wallace's phrasing of a question, that otherwise appeared to be direct, let Priebus off the hook from having to deny that some contacts between the Trump campaign and Russia did indeed occur:

WALLACE: You say that the intelligence community says that there were no contacts between anyone in the Trump campaign, any associate of Mr. Trump, and anybody involved as a Russian agent, as to the campaign and collusion in the campaign with Russia — is that what you're saying?

PRIEBUS: Yeah, they’ve told me — absolutely. They have made it very clear that that story in The New York Times is complete garbage. And, quite frankly, they use different words than that, OK?

WALLACE: Who is it that said that?

PRIEBUS: And then when I read back —

WALLACE: Who is it that said that?

PRIEBUS: I’m not going to tell you. I can’t tell you that.

But the New York Times report explicitly stated that officials had not found evidence of collusion to influence the election in the communications between the Trump campaign and Russia:

The intelligence agencies then sought to learn whether the Trump campaign was colluding with the Russians on the hacking or other efforts to influence the election.

The officials interviewed in recent weeks said that, so far, they had seen no evidence of such cooperation.

Therefore, all Priebus had to do in answering Wallace's question was confirm what the New York Times had reported. He did not have to deny that there were contacts between the campaign and Russia, but rather, only that those contacts amounted to collusion — something the Times report did not allege.

Between Priebus' parsing, Conway's and Spicer's inability to keep their stories straight, and Trump's inability to answer a straight question, it's little wonder that concern about Trump and the Russians is deepening, not lessening.

(Tommy Christopher and Katie Paris contributed to this article.)