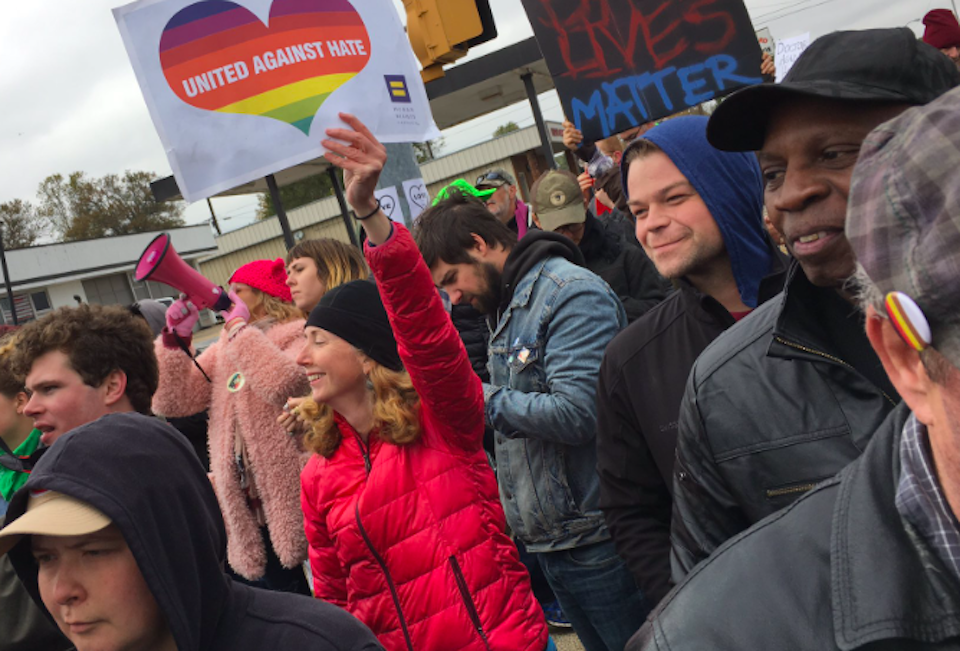 Lacy MacAuley
Get The American Independent in your inbox

Empowered by a White House that employs and coddles them, white nationalists marched through the small Tennessee town of Shelbyville. But protestors were on hand to drown out their message of hate.

In a scene that is becoming all too common in the Trump era, white supremacists, empowered and inspired by the current occupants of the White House, took to the streets to spew their vile messages of hate and bigotry.

But their display was just as pathetic as it was repugnant, and counter-protesters lined the streets to mock and denounce them.

According to one reporter, counter-protesters outnumbered white supremacists by roughly two-to-one.

The hate groups gathered in Shelbyville, Tennessee, for a so-called "White Lives Matter" march, which was dwarfed by protesters carrying positive messages and blaring music.

The message from those opposing the neo-Nazis was clear, as Shelbyville resident Debbie Hettish noted: "There's more of us than there are of them."

Debbie Hettish, 59, is a 21-year resident of Shelbyville. She came to protest WLM rally and to spread a message of love @Tennessean pic.twitter.com/LAllfDqLbX

The march was planned to start at 10 am local time, but was delayed due to the Nazis and Klansmen having to go through metal detectors.

In response to the delay, the counter-protesters, who appeared to have greater numbers than the marchers, had a soundtrack to offer:

As marchers made it through security, they were met by more creative antics from the protesters lining the streets: Dr. Martin Luther King, Jr.'s "I Have A Dream" speech blaring from a public address system.

Counter protesters play I Have A Dream speech. Nazis start Blood and Soil chant. Wait to the end of the video. #Shelbyville pic.twitter.com/wi94m7fggQ

At the end of the video, from Huffington Post reporter Christopher Mathias, the white supremacists start chanting "blood and soil," a racist chant right out of Nazi Germany.

This violent racism and bigotry are increasingly visible in the Trump era. White supremacists have been empowered by Trump's refusal to condemn them, and his horrifying claim that some among them are "very fine people."

But at this march in Tennessee, the counter-protesters carried the day, particularly whoever was in charge of the loudspeakers.

The counter-protesters #shelbyville playlist is dope as hell. La Bamba blasted so loud rn that you can't hear the Nazis chanting.

Whoever is MCing the counter-protest is hilarious. "Okay open mic! Who wants to talk to the master race?!" #Shelbyville

Pretty hard to hear the Nazi speech over the Bob Marley counter-protesters are blaring #Shelbyville pic.twitter.com/0U2t9qsz5C

The Greatest Generation fought and died to protect the world from the horrors of the Nazis. As long as Trump and the Republican Party embrace the "very fine people" who march alongside Nazis, hatred and division will fester.

But the counter-protesters in Shelbyville proved that messages of love and acceptance will always win out over bigotry and violence.

And a little well-deserved mockery goes a long way, too.