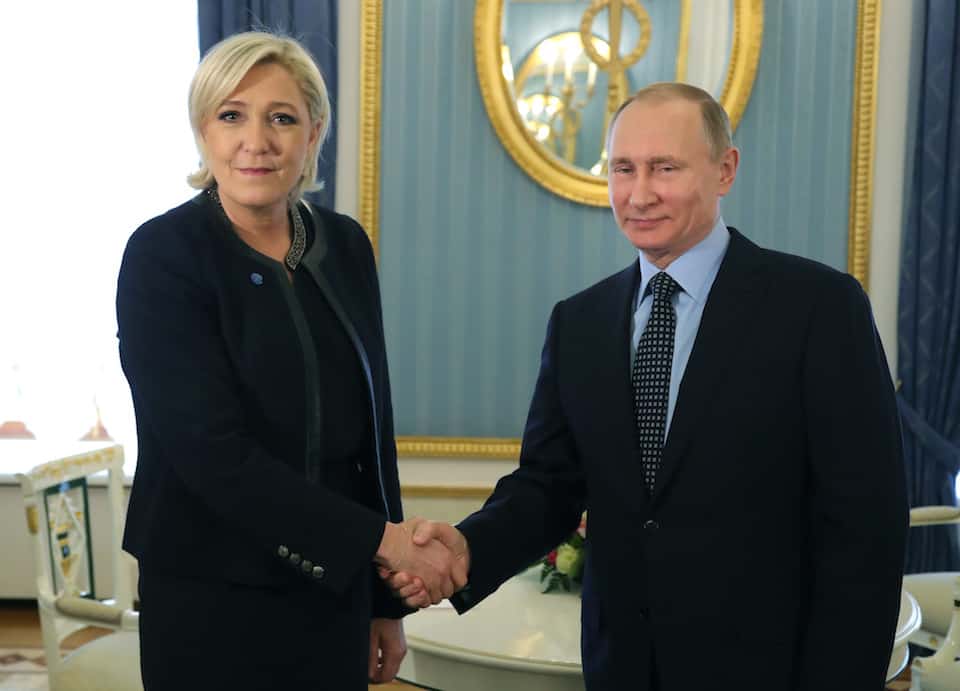 (Mikhail Klimentyev, Sputnik, Kremlin Pool Photo via AP)
Get The American Independent in your inbox

Marine Le Pen, leader of France's white nationalist National Front party, met with a Donald Trump advisor in Trump Tower. Now she is meeting with Russian President Vladimir Putin in Moscow. There is a reason white nationalists have connections to Russia.

Russian President Vladimir Putin likes to claim he does not interfere in elections within Western democracies — an obvious lie, as the United States Intelligence Community Assessment documenting Russian interference in the 2016 U.S. elections makes clear.

Putin's geopolitical goals include destabilizing not just the United States, but all Western democracies founded on classical liberal values. He wants to break up the European Union and NATO, both of which present obstacles to his imperialist goals of expanding Russia to take over all the territory which was once part of the Soviet Union, and creating what he calls a "multi-polar" world, in opposition to a world in which the U.S. is the sole super-power, backed by and supporting the rest of the Western democracies in Europe and the United Kingdom.

As part of these efforts, Putin often backs right-wing white nationalist extremist movements and candidates in certain countries and uses his extensive cyber-propaganda mechanisms to undermine their opponents, just as he did with Donald Trump and Hillary Clinton. When the United Kingdom was voting on whether or not to leave the European Union, Putin's social media bots were conning voters supporting the "Leave" position.

And in the lead up to the French presidential election, Putin's social media bots are out in force undermining the opponents of National Front candidate Marine Le Pen and spamming platforms with supportive posts on her behalf.

Now, just one month before the French presidential election, Le Pen is in Moscow meeting with Putin, and Putin is once again falsely claiming he is not interfering in a foreign country's electoral process:

#Russia reserves right to meet any French politician it wants to – #Putin to #LePen https://t.co/byBi1ei1S5 pic.twitter.com/4fLa7QUJ8M

PUTIN: We attach a great significance to our relations with France, and we try to keep even relations with the representatives of the current authorities, as well as those of the opposition. We know, of course, that the presidential campaign is in full swing in France now. By no means do we want to influence the current events, but we reserve the right to talk to all the representatives from all the political forces of the country.

For her part, Le Pen is publicizing the meeting with Putin and engaging in the anti-Muslim rhetoric that will be familiar to U.S. citizens from Trump and his surrogates:

LE PEN: I have traded with the President Poutine on the fate of Christians in the East, threatened daily by Islamist fundamentalists.

Le Pen's boyfriend and vice-president of the National Front party in France (Le Pen is the president) is likewise not only publicizing the meeting, but using Russian propaganda outlet Russia Today (RT) material to do so:

Le Pen has frequently praised both Trump and Putin. After the U.S. elections, she commented, "I feel less isolated today because of the multi-polar world defended by Donald Trump but also by Theresa May and Vladimir Putin." In January 2017, Le Pen was seen meeting at Trump Tower with three men, including Guido (George) Lombardi, who is known as a go-between for right-wing white nationalist movements in Europe and Trump and his team. His meeting with Le Pen was reportedly with the knowledge and blessing of Trump advisor Steve Bannon.

If one doubts the white supremacist nature of Le Pen and other recent right-wing nationalist movements, listen to Le Pen's words at a meeting of far-right leaders in January 2017, in the wake of the Brexit vote and the election of Trump: "2016 was the year the Anglo-Saxon world woke up. I am sure 2017 will be the year the people of continental Europe wake up." Her words were reportedly met with "loud applause" at the event.

Even once Trump leaves office, it is critical for Americans to understand that our nation and our allies are facing forces that seek to undermine and change the very values of freedom, liberty, equality, and inclusion upon which this nation was founded. In the words of Putin's geopolitical inspiration, Alexandr Dugin, "the Swamp is an ideology – Liberalism." When Trump, Bannon, and others speak about "draining the swamp," they do not mean government bureaucracy — they are echoing Dugin:

'The Swamp' is to become the new name for the globalist sect, the open society adepts, LGBT maniacs, Soros’ army, the post-humanists, and so on. Draining the Swamp is not only categorically imperative for America. It is a global challenge for all of us. Today, every people is under the rule of its own Swamp. We, all together, should start the fight against the Russian Swamp, the French Swamp, the German Swamp, and so on. We need to purge our societies of the Swamp’s influence. Instead of fighting between ourselves, let us drain it together. Swamp-drainers of the whole world unite!

The United States and our Western democratic allies are facing a global white supremacist nationalist movement supported by Putin with the goal of destroying civilization as we know it.