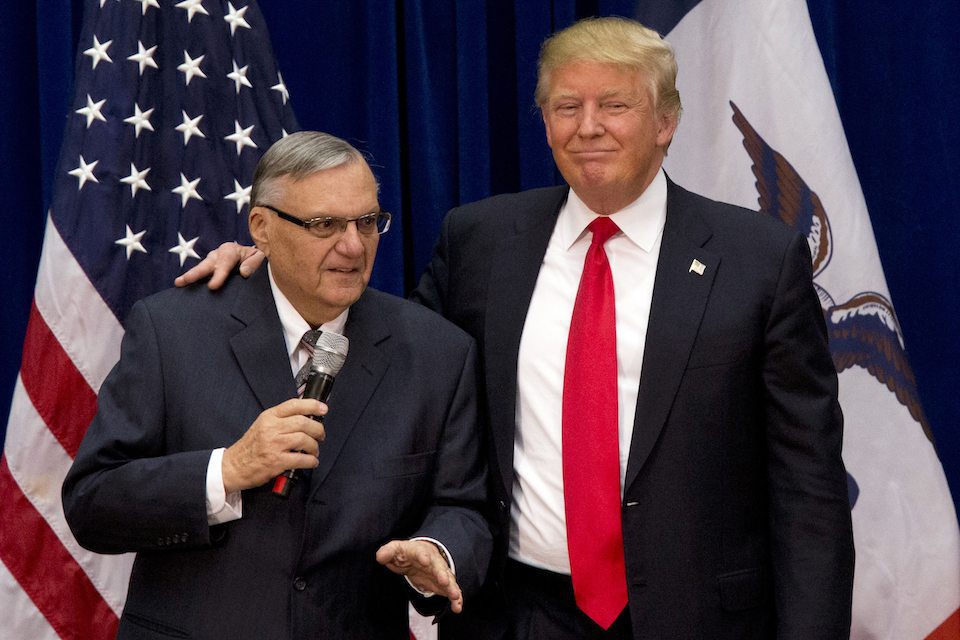 Donald Trump's White House did not have time on Friday afternoon to answer the question of which of the neo-Nazis Trump defended earlier in the week are "very fine people."

And Trump did not have time to offer any words of understanding and comfort, beyond "good luck," to the people of Texas, who are facing a massive hurricane that threatens to be at least as big — if not bigger — than Hurricane Katrina. He had to board Marine One to fly off with his family for a weekend getaway at Camp David, after all.

But on Friday, Trump found the time to issue a pardon for the former sheriff of Maricopa County, in Arizona, Joe Arpaio — who was convicted of criminal contempt. The reason? Because his egregious practice of racial profiling was a violation of the law, and the courts ordered him to stop, and he refused.

On Friday night, the White House issued its statement:

Today, President Donald J. Trump granted a Presidential pardon to Joe Arpaio, former Sheriff of Maricopa County, Arizona.  Arpaio’s life and career, which began at the age of 18 when he enlisted in the military after the outbreak of the Korean War, exemplify selfless public service.  After serving in the Army, Arpaio became a police officer in Washington, D.C. and Las Vegas, NV and later served as a Special Agent for the Drug Enforcement Administration (DEA), formerly the Bureau of Narcotics.  After 25 years of admirable service, Arpaio went on to lead the DEA’s branch in Arizona.

In 1992, the problems facing his community pulled Arpaio out of retirement to return to law enforcement.  He ran and won a campaign to become Sheriff of Maricopa County.  Throughout his time as Sheriff, Arpaio continued his life’s work of protecting the public from the scourges of crime and illegal immigration.  Sheriff Joe Arpaio is now eighty-five years old, and after more than fifty years of admirable service to our Nation, he is worthy candidate for a Presidential pardon.

This is the first pardon of Trump's presidency, and it's an obvious gift to the white supremacists and bigots of America, to whom Trump has been offering his support for more than a week.

This pardon comes on the heels of news that Trump also intends to terminate DACA, the program that allows undocumented immigrants who came to America as children to remain here.

It also comes on the heels of news that Trump signed a directive to ban transgender men and women from the military.

Trump did not have time to give more than a few words to the people of Texas, who are facing what the state's governor said is most certainly going to be a "major disaster," but he did have time to send an ugly message to America about where he stands when it comes to bigotry — and it's with the bigots.