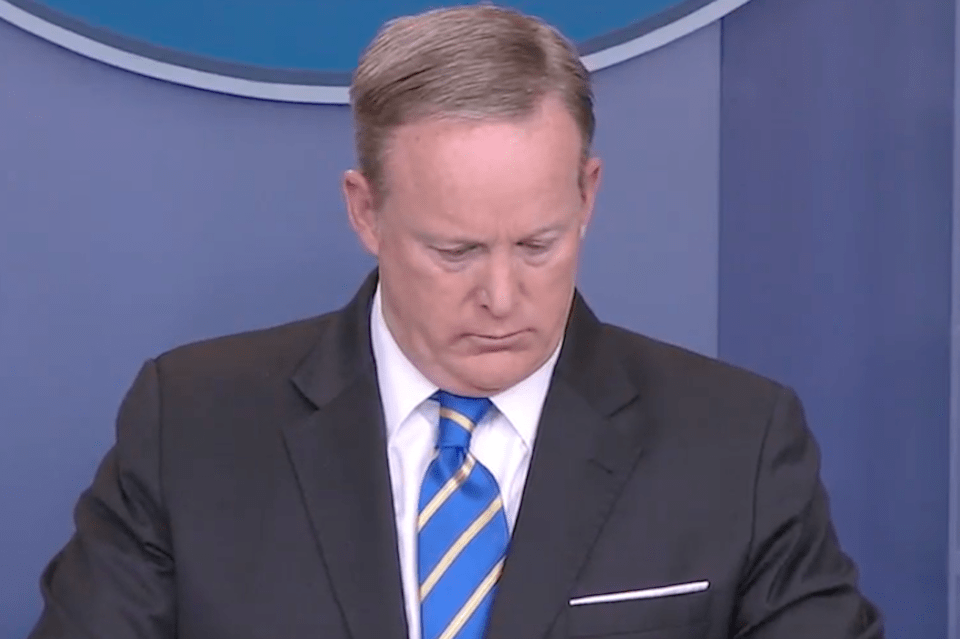 YouTube/The White House
Get The American Independent in your inbox

White House press secretary Sean Spicer was hounded by reporters again on Monday, over Donald Trump's threat that he would expose tapes of his private meeting with former FBI Director James Comey. Spicer refused to answer any questions about whether such tapes exist, insisting Trump's "position is clear."

Donald Trump's implied threat to silence former FBI Director James Comey continues to backfire, as members of Congress are now requesting any such tapes that might exist.

At Monday's White House daily briefing, press secretary Sean Spicer was hounded over Trump's threat, and eventually was chased out of his own briefing by the dogged questioning.

Spicer refused to say whether the White House would cooperate with any such requests, again relying on his non-answer response from Friday that "the president has nothing further on that":

SIMENDINGER: Several Republicans have joined Democrats in seeking additional information from the White House, in writing, about the existence of any tapes, producing the tapes, and any further information about the potential taping of conversations. Is this White House intending to cooperate with those requests and furnish that information, as requested in writing?

SPICER: I think I made it clear last week that the president has nothing further on that. Hunter?

SIMENDINGER: Does that mean that the president will deny the requests?

SPICER: I said, I was very clear, that the president would have nothing further on that last week.

SIMENDINGER: Is there a situation in which the president would defy the legislative branch's request?

SPICER: Alexis, I made it clear what the president's position is on that issue.

.@HallieJackson presses Spicer on tapes, asks how anyone can be comfortable discussing things privately with Trump. Spicer remains a clam. pic.twitter.com/kN3zCV1DLs

JACKSON: Why won't you just explain whether or not there are recordings of the president's —

SPICER: I think the president has made it clear what his position is.

JACKSON: That's not my question. Why won't you explain it?

SPICER: Because that's what the president's position is.

JACKSON: So given that refuse to confirm or deny any of this, how is any senior official supposed to feel comfortable having a conversation privately with the president?

SPICER: Hallie, I think the president has made it clear what his position is.

JACKSON: Even with these congressional lawmakers calling for...

SPICER: Hallie, I have answered the question over and over again in the same way.

Spicer refused to call on ABC News' Jonathan Karl, who rattled Spicer on the subject last week, but he was pressed just as hard by Kaitlan Collins of the conservative Daily Caller.

Collins exposed the absurdity of Spicer's response by asking him, "How has the president made it clear what his position is on the recordings? I've only seen the tweet."

Spicer replied, "Right, that's his position, and he has nothing further to add."

Spicer then went into a lengthy digression into the firing, and ultimately fled the briefing amid a flurry of shouted questions:

Nice job by @kaitlancollins knocking Spicer back on his heels on Comey and the "tapes," Spicer clearly rattled pic.twitter.com/Xf25C0IVqV

COLLINS: How has the president made it clear what his position is on the recordings?

COLLINS: Well, how has he made it clear?

SPICER: So, that’s his position, he said that he has nothing further to add.

SPICER: I understand. Theres nothing further to add.

COLLINS: My second questions is: Has he made other inquiries about the Russia investigation to any other FBI officials?

SPICER: I don’t — no, not — I haven’t asked him about that, but I’m not aware of anything.

COLLINS: Okay, and one small follow up: Last week, you said you would get back to us on who requested the dinner between him and Comey?

SPICER: I still — I apologize, I will follow up on that today. I think one of the things that's important with respect to that, just to clear something up, I think that there was clearly bipartisan support that Jim Comey wasn’t up to the job. The president has every right to fire a person, because he believed Director Comey lacked the judgment and the decision-making skills and wasn’t up to the job.

The president's reaction to this, to what — his position has been completely misrepresented. You think about what he said to NBC News. He said, one, he didn’t care that this action would make matters worse for him. That it, quote, 'might even lengthen out the investigation' because he would take action against Jim Comey in firing him. He said that he wants the investigation to be done, quote, 'absolutely properly.' And he said that it might even confuse some people that he would take this action, knowing it would make matters worse for him. The actions that he took, he knew could be detrimental to himself, but none of those things mattered because the president had to do the right thing for the American people, because he believes that Jim Comey was the wrong man for that position.

COLLINS: Why did he feel like Comey was the wrong person for the American people?

SPICER: Because he didn’t have the leadership skills necessary to lead that institution. And as he said in the statement at the time, the FBI is the crown jewel of law enforcement, and they deserve a leader that can properly lead the institution. Thank you guys very much, I'll see you tomorrow.

Whether or not Trump recorded his conversations with Comey, this line from the White House cannot possibly hold.

Trump's threat in no way constitutes a "position" on secret taping. It in no way addresses congressional demands for these tapes. It also does not address compliance with the Federal Records Act, which would require any such recordings to be archived.

Spicer and Trump can run, but they cannot hide from the implications of this reckless and chilling threat.