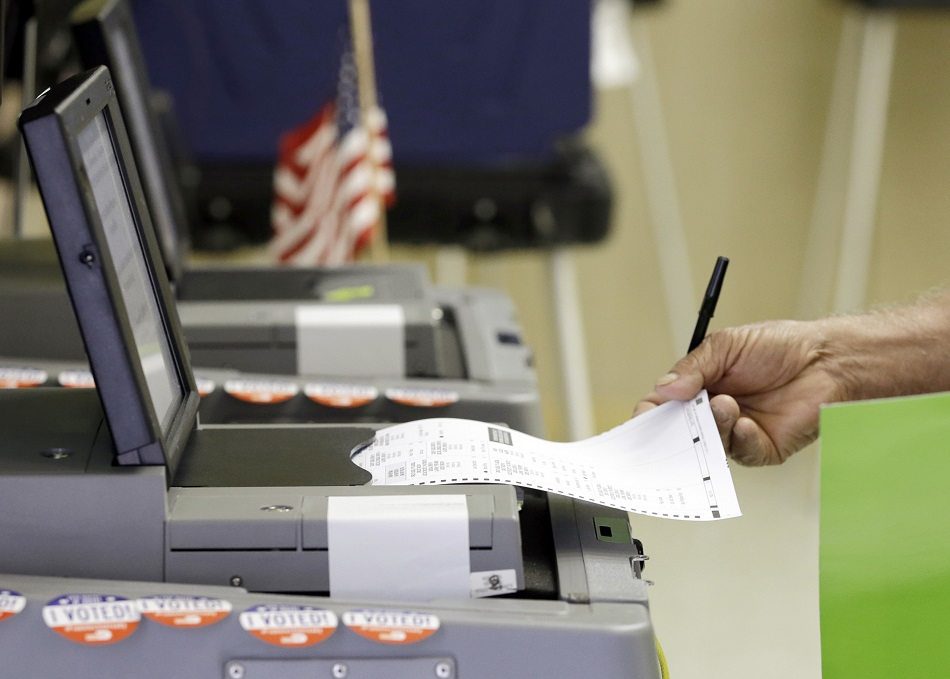 (AP Photo/Alan Diaz, File)
Get The American Independent in your inbox

Donald Trump had narrow margins of victory in what was called the "blue wall" of Wisconsin, Michigan, and Pennsylvania. Suspicions about hacking by foreign influences, pre-election polling that turned out to be starkly inaccurate, claims of "rigged" elections, and Hillary Clinton's massive popular vote win all make recounts of particular interest in this election. Despite technical snarls and legal challenges, the efforts are moving forward in these three states.

Some of the biggest surprises on Election Day were Donald Trump’s victories in Michigan, Pennsylvania, and Wisconsin, the so-called "blue wall" that Trump won by narrow margins. The margins were so narrow, in fact, that Jill Stein, the Green Party candidate, had more votes in each of the three states than the margin between Trump and Clinton.

The heightened interest in recounts this year stems in part from warnings of vote hacking issued by groups such as the University of Michigan Center for Computer Security and Society, as well as Trump's rhetoric on the campaign trail about "rigged elections."

They were also states where the polls had high degrees of error and where forecasters projected Democratic victories.

Stein, who has raised $7,000,000 for the recount efforts, noted that, "Election integrity experts have independently identified Michigan, Pennsylvania and Wisconsin as states where 'statistical anomalies' raised concerns. The anomalies are based on the presence of razor-thin margins, hackable and error-prone touch-screen machines, and a discrepancy between exit polls and election results."

The recount in Wisconsin, where Trump's margin of victory over Clinton is currently at about 22,000 votes, was quickly cleared to proceed and is well underway.

However, a significant hurdle in the Wisconsin recount is that the state uses touchscreen electronic voting machines, which California banned over a decade ago because of concerns over the machines' security and reliability. John Schwartz of the New York Times highlights the problem of using these machines in recounts, noting that, “Without a paper trail, created at the time of the voting, to show the votes, they argue, electoral flaws or fraud could go undetected and recounts could be impossible.”

All counties in Wisconsin are participating in the recount, though not all in the same way. Some have opted to use optical scanners after a judge ruled that those scanners could be used to count hand ballots. But optical scanners are problematic in this regard because they do not work if a voter used incorrect ink, voted with a check mark instead of filling in a bubble, or crossed out a mistaken vote. Furthermore, Wisconsin recount observers have noticed broken warranty seals on the scanners, indicating that the machines could have been tampered with.

Michigan currently has the closest margin of victory for Trump, where he leads by only around 10,700 votes and where he tried and failed to halt the recount.

Michigan uses only paper ballots, so there is not the same level of concern over electronic voting machine hacking. However, the state does use automatic tabulating optical scanners which share the same flaws as those being used in Wisconsin.

Pennsylvania had the largest margin of victory for Trump of the three recount states, though his lead there has shrunk from 71,000 votes to 49,000 as overseas votes, provisional votes, and a few individual precinct recounts were added.

Pennsylvania relies primarily on electronic voting machines, which the Los Angeles Times said would be “a 'nightmare scenario' in the event of a disputed election.” Stein has filed a federal lawsuit to force a statewide recount in Pennsylvania.

One does not have to believe that the recounts will change the election results to support the efforts.

As Nate Silver, of FiveThirtyEight, states, “In many ways, undertaking an audit of the election results is tantamount to performing a test for a rare but potentially fatal disease.”

Although there are obstacles in these efforts, including flawed machines and legal battles, proceeding with the recounts is a worthy endeavor to ensure fair and valid elections and to protect the public's trust in democracy and the belief that their voices will be heard on Election Day.

And looking ahead, these efforts can lend themselves to the overarching goal of election reform and toward a more transparent voting system nationwide.

Shareblue spoke to Russ Baker, an investigative journalist and founder of WhoWhatWhy, which is doing excellent work covering all the moving parts of the recounts. Baker outlined the urgency of paying attention to the recount process:

One of the biggest challenges we face in our work is to get sustained attention to solutions. Prescriptive posts to fix the system are ignored in the thick of a questionable election result, because people's focus is on the immediate process. And then they are ignored afterwards, because people have moved on, and there is no urgency to address the issue.

Irrespective of the results of the recount, the concerns that underwrite their necessity do not go away.