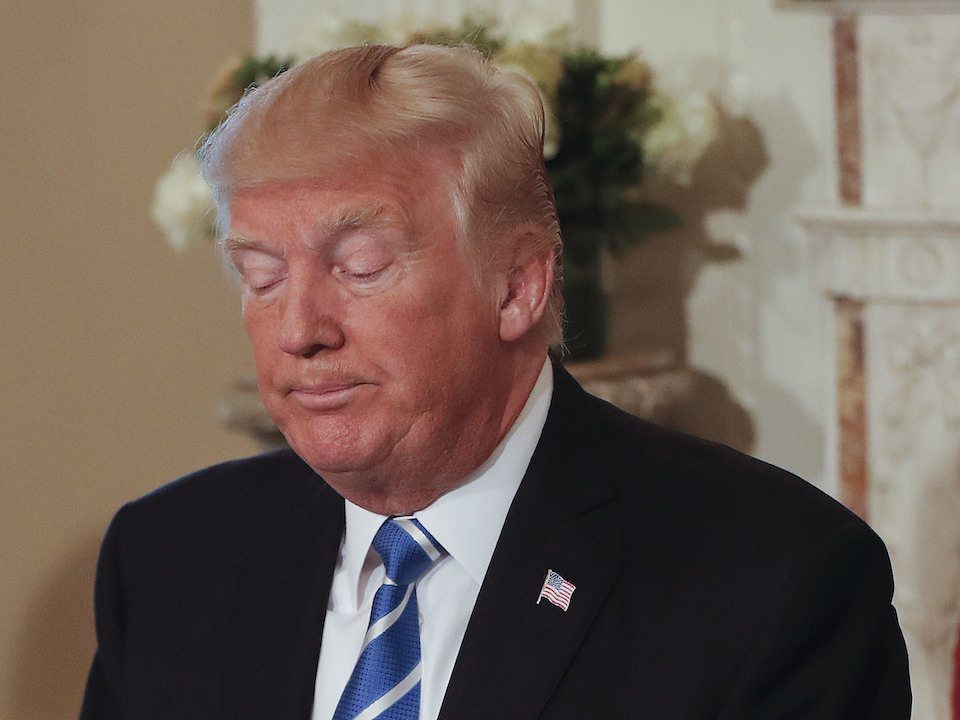 Left to his own devices, Donald Trump would spend his days golfing and anger-tweeting. But thanks to pressure, largely from Democrats in red states, Trump was forced to take action on the country's opioid epidemic.

Before this past week, the most Donald Trump did to address the opioid epidemic was to call New Hampshire a "drug-infested den."

In contrast, Dayton, Ohio, mayor and Democratic gubernatorial candidate Nan Whaley has been pushing for more action for a long time: "In June, Dayton was the first city in Ohio and fourth in the nation to sue the big drug companies, manufacturers and doctors responsible for the heroin epidemic."

Whaley also worked to ensure that Dayton first responders have Naloxone, a potentially life-saving drug when dealing with opioids.

A proud Democrat in a state Trump carried in 2016, Whaley is not shy about calling him out for the harm he is doing. When Trump visited Ohio in July — in the midst of stumping for the GOP's Obamacare repeal bill, which would only exacerbate the opioid epidemic — Whaley sent him a letter calling for more action:

Furthermore, the opioid epidemic is ravaging our communities and hurting our economies. Medicaid provides nearly half of all opioid addiction treatment funding, and cutting this program back will only make our challenges harder. Over 220,000 Ohioans could lose their treatment coverage if Medicaid expansion is slashed.

So when Trump took a break from his golf-filled luxury vacation to call a press conference about the opioid epidemic, some were hopeful that he would at least direct others to follow the recommendations of the opioid commission he put together.

But first, Trump did what he always does: Obsess about President Obama. The Washington Post editorial board took him to task:

Mr. Trump launched an extended attack on his predecessor’s record, accusing President Barack Obama’s administration of having reduced drug prosecutions and failing to achieve longer sentences in those drug-related cases it won. Not only did this inject a discordantly partisan note into a subject that had heretofore brought Democrats and Republicans together, but also it was of dubious logic. For much if not most of the Obama presidency, users obtained opioids through legal channels — starting with doctor prescriptions. At least Mr. Obama’s administration sought to clamp down on that through tightened national prescribing guidelines late in his term.

Trump's eagerness to return to the back nine rather than focus solely on the crisis did not sit well with those impacted by opioid abuse.

When Trump initially decided to ignore his commission's recommendations, Whaley sent an email to her supporters demanding more accountability from the Trump administration. Others around the country joined in the call for more and immediate action.

After intense pressure from Whaley and others, Trump finally relented. On August 10, the Trump administration declared the opioid epidemic a national emergency.

But Whaley and others know that what Trump says cannot always be trusted:

Declaring a state of emergency is a step forward, one that the City of Dayton took years ago, because this epidemic needs to be dealt with like a natural disaster.

But this is only a start, Trump must make a genuine commitment to addressing this epidemic. That includes holding the big drug companies accountable. He cannot simply give lip service to the Americans who are dying and the families who are suffering.

Pressure from Whaley and millions of like-minded progressives, including those in red, Trump-supporting states, showed once again that the resistance is working.

On issues from protecting the ACA to war-mongering to the opioid epidemic, vigilance and persistence are leading to concrete results.

Stand Up Fight Back is a regular series that focuses on Democrats at the federal, state, and local level who are taking real, concrete actions to further the resistance and fight for progressive values.