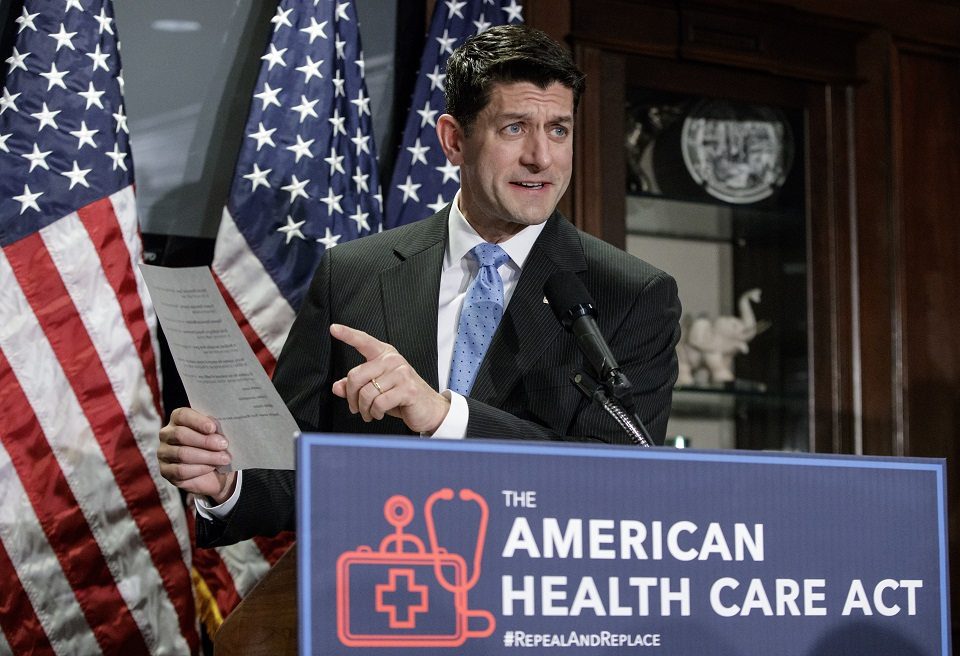 The Obamacare repeal plan being rushed through the House by Paul Ryan and championed by Donald Trump would particularly punish victims of the opioid epidemic, especially in many states Trump won.

There is no shortage of problems with the House Republicans' bill to repeal Obamacare, currently being rammed through committee with no input from Democrats or the Congressional Budget Office: It raises premiums. It kicks up to 10 million people off their plans. It cuts nearly $600 billion in taxes for the wealthy. It bans Medicaid patients from using Planned Parenthood.

And to further drive home just how breathtakingly cruel the Republican plan is, consider what it does to the poorest, sickest, most vulnerable people in Republicans' own states.

For years now, America has been facing a public health crisis from the proliferation of prescription painkillers, driven especially by opioids like OxyContin, Vicodin, and Fentanyl. 52,000 Americans died of drug overdoses in 2015, or one death every ten minutes. That is more than the number of people who died from gun violence or motor vehicle accidents. The epidemic has ruined lives and torn families apart all across the country, especially in conservative, rural communities.

Three of the states hit worst by the opioid crisis are West Virginia, Kentucky, and Ohio. All three of these states voted for Trump, and all three of them also participated in the Affordable Care Act's Medicaid expansion, allowing anyone earning up to 138 percent of the poverty line to enroll in public insurance. By one estimate, 29 percent of people covered by the Medicaid expansion are struggling with mental illness or addiction.

The Republican repeal plan ends the federal government's 90 percent cost-sharing for the Medicaid expansion after 2020, which would force most states to pull out, ending coverage for millions of low-income people who need treatment. It also allows state Medicaid administrators and private insurance companies to deny coverage to drug addicts.

The end result of these changes would be millions of people unable to get treatment for substance abuse, and the worst of it would be in those states struggling the most under the opioid crisis. Indeed, even Republicans from those states, like Ohio governor John Kasich and West Virginia senator Shelley Moore Capito, have warned the consequences of losing Medicaid expansion would be disastrous.

And this is not the first time congressional Republicans have played politics with the lives of prescription drug victims. Last year, the GOP forced President Obama to accept FDA deregulation as a condition for passing the 21st Century Cures Act, a comprehensive health care bill designed in part to combat the drug addiction epidemic.

Trump and the House Republicans, by backing this Obamacare repeal bill, have shown again they have little to no compassion for Americans in dire straits — even those who voted for them. If the fight over the Medicaid expansion is any guide, many of those who supported Trump are unlikely to see any help for their own communities, and indeed may find themselves pushed into worsening peril.