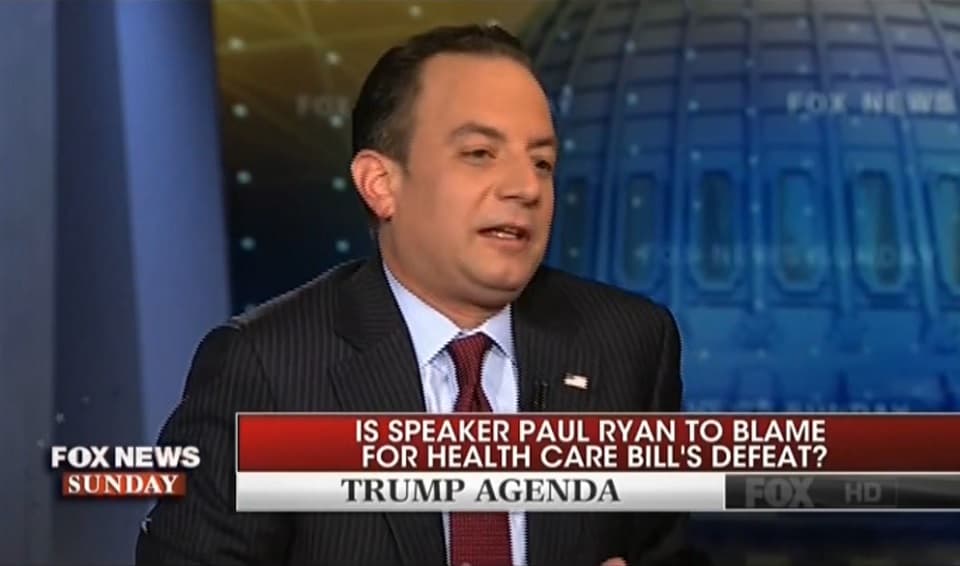 On the heels of the failure of the Republican plan to repeal Obamacare, Donald Trump insisted that he did not blame Speaker of the House Paul Ryan (R-WI). Then he pointed his Twitter followers at a Fox News segment demanding Ryan step down. Now, White House Chief of Staff Reince Priebus is insisting this was just a "coincidence."

Speaker of the House Paul Ryan (R-WI) is in a heap of trouble following the defeat of the Republican plan to repeal Obamacare. And although Donald Trump initially blamed this humiliation on Democrats, his subsequent actions have seemed belie that, in a notably pointed way.

Trump tweeted a message directing his followers to a Fox News segment in which Judge Jeanine Pirro called for Ryan to step down. The significance was not lost on journalists:

"Paul Ryan needs to step down as speaker of the house.The reason? He failed to deliver the votes on his healthcare bill." #openingstatement pic.twitter.com/75WbI4mcYX

White House Chief of Staff Reince Priebus tried to quell the controversy by insisting that the tweet was a coincidence, which drew a skeptical "Come on!" from Fox News Sunday host Chris Wallace. Even more telling, though, was the fact that Priebus claimed not to have spoken to Trump about the tweet:

WALLACE: Does the president want Paul Ryan to resign as speaker?

PRIEBUS: Well, first of all, I will go on record, we do love Judge Jeanine, and so does the president. I think it was more coincidental, Chris —

PRIEBUS: I did not talk to the president about the tweet. I'm just telling you the truth. There was no preplanning here. The president —

WALLACE: But why would he say, 'Watch her,' and then that's the first thing out of her mouth?

WALLACE: Does he want Paul Ryan to step down?

PRIEBUS: No he doesn't.

Priebus may or may not have spoken to Trump about the tweet, but in either case, claiming that he did not allows Priebus to muddy the waters as to Trump's intentions. But the message Trump sent was clear to everyone else: This was a warning shot to Congressional Republicans, reinforced by Priebus elsewhere in the interview, which signaled a shift to blaming Republicans for the repeal bill's failure, and questioning their loyalty to Trump.

The ultimate purpose of this White House PR strategy, though, is to attempt to absolve Trump himself of any blame for this crushing defeat, and to divert attention away from the larger problem facing Trump's presidency: Its ongoing crisis of legitimacy.