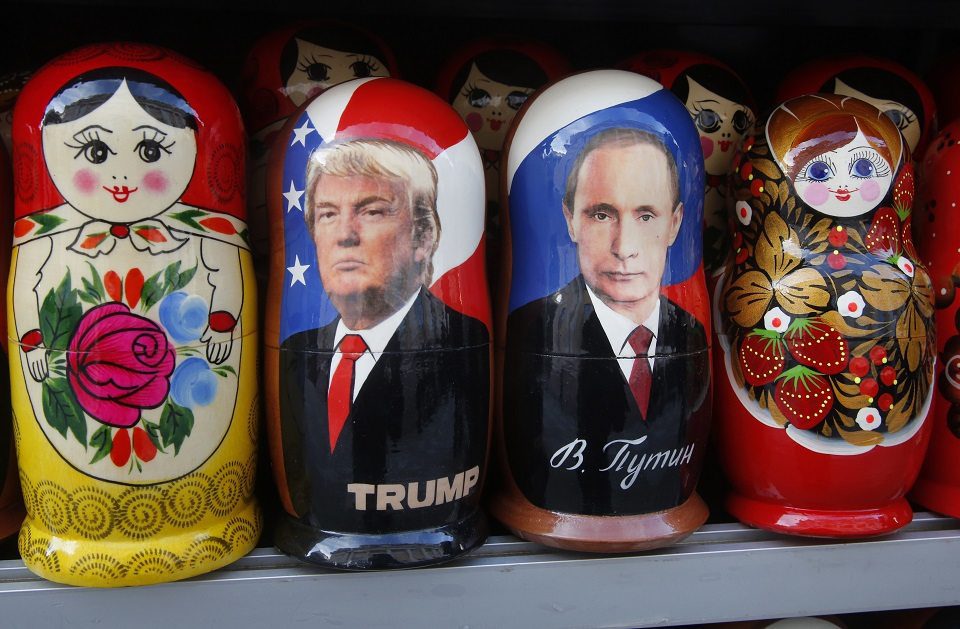 (AP Photo/Dmitri Lovetsky)
Get The American Independent in your inbox

The often-derided Steele dossier on Donald Trump has proven over time to contain more truth than not.

Donald Trump continues to characterize the issue of his ties to Russia as "fake news," and many in the GOP have colluded with him to avoid establishing a bipartisan independent investigatory body. But one of the central public documents at the core of the controversy continues to haunt them all.

Both CNN and Buzzfeed recently published contents of what came to be known as the Trump kompromat or Steele dossier. After it was published, Trump and his surrogates engaged in a campaign to discredit the document and to create sufficient confusion as to deflect from the implications of its contents.

Here are 16 things we know:

Russia has an extensive program of state-sponsored offensive cyber operations. This claim is TRUE. The Intelligence Community Assessment (ICA) "Assessing Russian Activities and Intentions in Recent US Elections" — published on January 6, 2017, and created with the cooperation of all 17 U.S. intelligence entities — validates this assertion.

Per the New York Times: "Phone records and intercepted calls show that members of Donald J. Trump’s 2016 presidential campaign and other Trump associates had repeated contacts with senior Russian intelligence officials in the year before the election, according to four current and former American officials."

And CNN: "High-level advisers close to then-presidential nominee Donald Trump were in constant communication during the campaign with Russians known to US intelligence, multiple current and former intelligence, law enforcement and administration officials tell CNN."

And even Russian Deputy Foreign Minister Sergei Ryabkov : "There were contacts. We continue to do this and have been doing this work during the election campaign."

The Russian government has been cultivating a relationship with Trump for years. This claim is TRUE. Former Russian ambassador to the United Nations Vitaly Churkin first met Donald Trump in 1986, over 30 years ago, while in the company of then Soviet ambassador Yuri Dubinin. When asked about their relationship in 2016, Churkin admitted to having also met with Trump "a few years ago." Dubinin invited Trump to Russia the following year.

Further, Trump traveled to the Soviet Union/Russia multiple times over the subsequent decades, pursuing business opportunities in the country. Most notably, Trump held the 2013 Miss Universe pageant in Moscow, when he tweeted his infamous tweet wondering if Putin would become his "new best friend" and bragged about how "almost all of the oligarchs [wealthy Russian leaders who are the powers behind the throne of the government] were in the room" during one party he attended. And as a wealthy businessman, a celebrity, and someone who had almost run for president in both 2000 and 2012, Trump would have been a natural and obvious target for the Russian intelligence, according the U.S. intelligence experts.

Paul Manafort served as a manager for communications between the Trump campaign and the Russian government. This claim is SUPPORTED BUT UNVERIFIED. Manafort's extensive connections with Russia and its allies are well documented. When he was still acting as campaign manager, Manafort successfully made the Republican Party unexpectedly remove its anti-Russia language in relation to Ukraine from its official party platform. Manafort lied and denied this was the case, but multiple sources confirmed he had managed the effort. He left his position as Trump's campaign manager in August 2016 in the wake of controversy surrounding his ties to Russia and its allies in Ukraine.

Carter Page served as an intermediary between the Trump campaign and the Russian government. This claim is SUPPORTED BUT UNVERIFIED. In an interview in March 2016, Trump named Carter Page as one of his foreign policy advisors. During his tenure with the Trump campaign, Page disconcerted U.S. officials by making multiple speeches praising Russian President Vladimir Putin and touting how a Trump presidency would be good for U.S. Russian relations. The U.S. intelligence community began investigating Page's relationship with the Russian government in September 2016. In late September, Page also left the Trump campaign in the wake of controversy about his ties to Russia. After the election, Page asserted he continued to be in communication with the Trump team, and he continued to travel frequently to Moscow and interact with various arms of the Russian government.

Russian diplomat Mikhail Kalugin was withdrawn from Washington, D.C. on short notice because of his involvement in the presidential election operation might be exposed. This claim is SUPPORTED BUT UNVERIFIED. Mikhail Kalugin was indeed sent back to Russia from his post in the U.S., but the Russian government claims that this was done as part of a "planned rotation." Sources "with knowledge of a multi-agency investigation into the Kremlin’s meddling" confirmed that Kalugin was indeed "under scrutiny" when he was withdrawn to Russia.

Russia worked through Trump team intermediaries to negotiate for the lifting of U.S. sanctions that were put in place following its invasion of Ukraine and annexation of Crimea and the additional sanctions imposed as a result of its interference in the presidential elections. This claim is SUPPORTED BUT UNVERIFIED. While the exact mechanism by which he came to this decision is unknown, Trump has repeatedly voiced an openness to lifting the sanctions.

Russian state-owned oil giant Rosneft President and close friend of Putin, Igor Sechin, offered Trump and his associates a 19 percent (privatized) stake in Rosneft in return for the lifting of U.S. sanctions, which would allow Rosneft to proceed with a multi-billion dollar Arctic drilling deal it had made with ExxonMobil. This claim is SUPPORTED BUT UNVERIFIED. The day before the U.S. election, November 7, 2016, Rosneft signed a deal to sell-off 19.5 percent of Rosneft to raise cash. The deal was to be finalized on December 5, 2016. The final recipient of the shares and/or their value is not clear as the transaction appears to have been run through multiple layers of intermediaries.

The dossier details a dozen conversations between senior Russian officials and other foreign nationals involved in gathering information during the campaign hurtful to Hillary Clinton and helpful to Trump. This claim is AT LEAST PARTLY TRUE. Members of the U.S. intelligence community have confirmed that signal intelligence (intercepted communications) confirms an unspecified number of these conversations.

The Kremlin directly or indirectly funded visits to Moscow of what it considered sympathetic U.S. individuals, including Carter Page, Green Party presidential candidate Jill Stein, and then former Defense Intelligence Agency Director and retired Lt. General Michael Flynn. This claim is AT LEAST PARTLY TRUE. As has been widely reported, Stein and Flynn attended an anniversary party for Russian state-owned propaganda outlet Russia Today (RT) and sat at a table with Putin. Flynn was paid $40,000 for making the keynote address to the gathering. Flynn was forced to resign from his position as Trump's National Security advisor because of questions about his contact with Russian officials before he took office. Trump supporter Sheriff David Clarke was also in Moscow on the same day as the RT celebration, December 10, 2015, and said he met with the Russian foreign minister during his trip.

The Russian regime was behind obtaining and, through intermediaries, providing to Wikileaks emails obtained by hacking the Democratic National Committee. This claim is TRUE. The ICA noted above called  "Assessing Russian Activities and Intentions in Recent US Elections" validates this assertion.

IN ADDITION to many of the claims within the dossier being either true or possibly verifiable with additional information, three Russian officials possibly linked to either the dossier or the Russian election operation have died mysterious deaths in the past few months, and the man who wrote the dossier has gone into hiding:

On Election Day itself, November 8, 2016, the consular duty commander of the Russian embassy in New York City, Sergei Krivov, was found dead within the embassy. First responders reported he had a head wound caused by blunt force trauma. Consular officials claimed he died of a heart attack. As duty commander, Krivov would have had access to a top secret tool used to encrypt and decrypt messages sent to and from the embassy. He would also have been in charge of preventing espionage by the U.S. and others within the building. To the extent the U.S. intelligence community gained access to signal intelligence from Russian representatives in New York, Krivov would have been responsible. He also would have been an ideal target for U.S. intel to attempt to recruit as an asset.

One of the primary sources within the dossier is described as "a Russian source close to" Rosneft President Sechin. This source is thought to be a man named Oleg Erovinkin, an ex-KGB/FSB agent and Chief of Staff for Sechin. Erovinkin was found dead in the backseat of his car on December 26, 2016. His cause of death was unexplained, but foul play was suspected by many Russian media reports. Rosneft officials claimed he had heart problems. However, the Russian government did not issue its usual claim of death by heart attack, and it is possible Erovinkin's death was being used as a cautionary example.

During his more than ten year term as UN ambassador, Churkin developed close relationships with many people highly-placed within the U.S. government, as well as business leaders like Trump. While it is not known whether Churkin was a source for any material in the dossier, it is possibly significant that Churkin died suddenly and in mysterious circumstances in New York City on Monday, February 20, 2017. Following his autopsy, the New York medical examiners said "more tests" were needed to determine his cause of death, and the investigation in his death is still ongoing.

And finally, the author of the dossier, British former counter-intelligence official Christopher Steele, is well-respected enough as an expert on Russia that the FBI once considered paying Steele for what it apparently considered highly credible information. Steele went into hiding as soon as his identity was revealed in January and remains in hiding in fear for his life, a full seven weeks later.

REMEMBER, this is all public and published information. We do not have any idea what classified or top secret information exists. A bipartisan independent investigation on the ties between Trump and his team and the Russian government is vital to the national sovereignty and security of the United States.