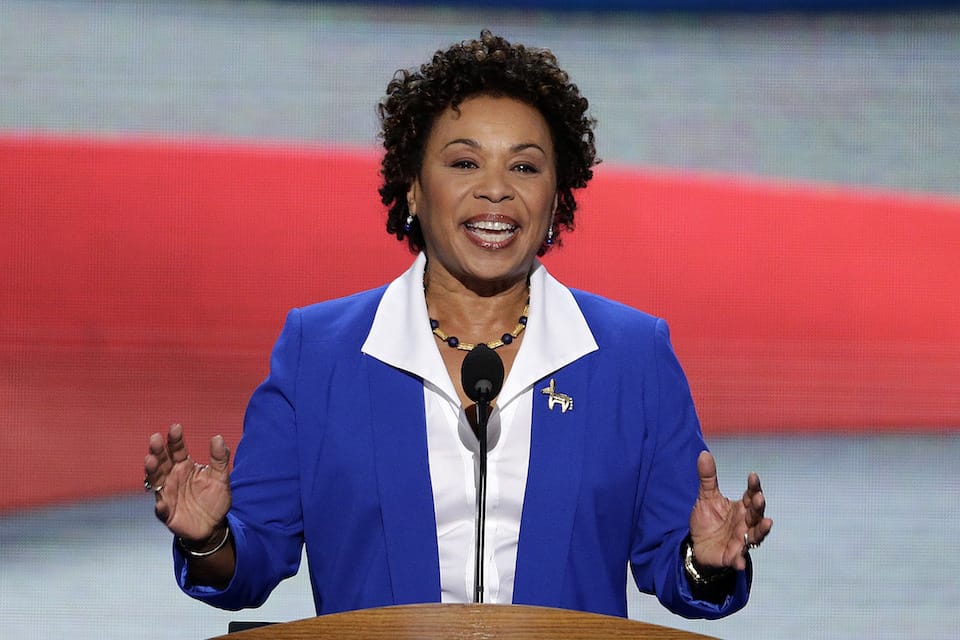 Donald Trump expressed his deep admiration for the virulently racist former President Andrew Jackson and seemed to suggest the nation could have "worked out" the Civil War without bloodshed. With just one tweet, Rep. Barbara Lee (D-CA) reminded him why that was impossible.

In a new interview on Sirius XM with Salena Zito of the Washington Examiner, Donald Trump offered glowing praise for Andrew Jackson, a president who is generally reviled for his genocidal policies against Native Americans.

Trump has expressed his love for Jackson on previous occasions, but this time he made a new claim that ignited a firestorm of controversy and ridicule:

I mean, had Andrew Jackson been a little later, you wouldn't have had the Civil War. He was a very tough person, but he had a big heart. And he was really angry that — he saw what was happening with regard to the Civil War. He said, “There's no reason for this.” People don't realize, you know, the Civil War — if you think about it, why? People don't ask that question, but why was there the Civil War? Why could that one not have been worked out?

There are many things wrong with this statement, including the fact that the Civil War took place 16 years after Jackson's death. And that Trump apparently has no idea what the Civil War was about, the reasons behind it, and why it could not have simply "been worked out."

President Trump doesn't understand why there was a Civil War.

It's because my ancestors and millions of others were enslaved. https://t.co/dFjpbp1pUy

Despite the historical revisionism by people who attempt to paint the Confederacy in a nobler light, the Civil War was, before anything else, a war over slavery. The states that withdrew from the Union and fired the first shots, which forced President Lincoln to retaliate, cited their desire to preserve slavery as the reason for secession.

Here, for example, is one of the principal passages of the Texas secession manifesto:

We hold as undeniable truths that the governments of the various States, and of the confederacy itself, were established exclusively by the white race, for themselves and their posterity; that the African race had no agency in their establishment; that they were rightfully held and regarded as an inferior and dependent race, and in that condition only could their existence in this country be rendered beneficial or tolerable.

We assert that fourteen of the States have deliberately refused, for years past, to fulfill their constitutional obligations, and we refer to their own Statutes for the proof.

In other words, the only way the Civil War could have been "worked out" without Southern secession was if Lincoln and the Northern states had promised to tolerate slavery forever and agreed to hand over every runaway slave who crossed into free states. This is not a concession Lincoln, nor just about any American alive today, could agree to.

Trump's ignorance about one of the darkest conflicts in American history — and his assumption that other people do not realize the reasons behind the Civil War — is absolutely inexcusable. The California congresswoman should not have had to remind Trump, on social media, of a simple fact any sixth grader could have told him. Especially after Trump visited the National Museum of African American History and Culture in February, which provides an extensive history lesson on the Civil War.

The man commanding our armed forces should have at least a basic understanding of why the blood of those forces has been shed.