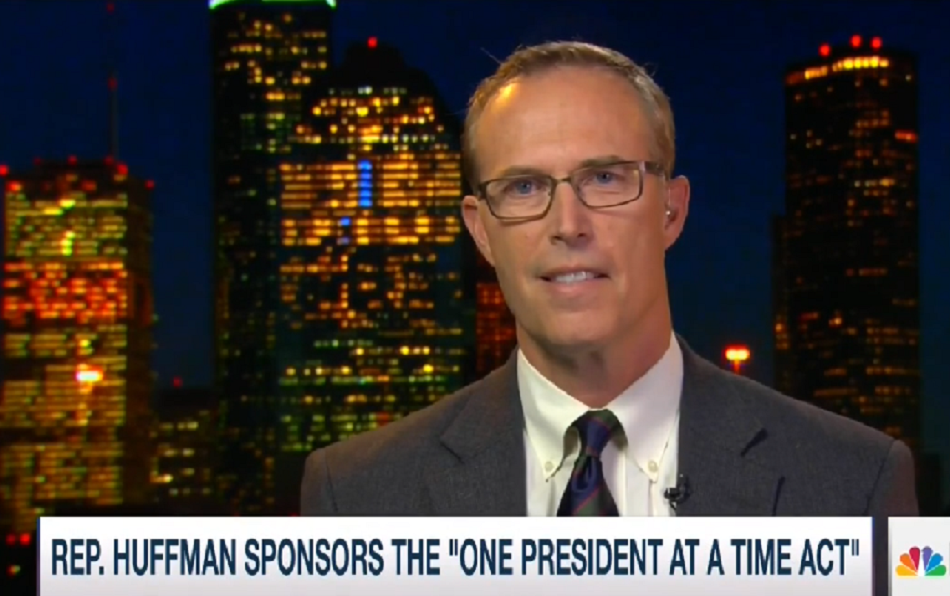 In response to President-elect Donald Trump's reckless behavior and disrespect for political norms that have always governed presidential transition periods, California Democratic Representative Jared Huffman has introduced the appropriately-titled One President at a Time Act.

Since winning the election, Donald Trump has behaved as though he is already the president, engaging in foolhardy and dangerous foreign policy antics and showing disrespect to still-President Obama while doing so.

In an effort to call this out, and to forestall similar behavior from future presidents-elect, California Democratic Representative Jared Huffman recently introduced the One President at a Time Act.

NBC News notes that the bill seeks to clarify that the Logan Act "which prohibits private citizens from conducting foreign policy, also applies to incoming presidents."

Huffman spoke to MSNBC's Lawrence O'Donnell about what prompted his bill, and addressed any possible First Amendment concerns it may raise:

O'DONNELL: Joining us now, Representative Jared Huffman, Democratic representative of California's 2nd district. Congressman Huffman, you've got a bill that you've introduced that would make it illegal for presidents-elect to meddle in foreign policy, as we've seen Donald Trump doing in what is an unprecedented way. Can you explain to us how that bill would work?

HUFFMAN: Yeah, Lawrence, first of all, I think it's arguably already illegal for a president-elect to do this. The Logan Act has been on the books since 1799. But I think President-elect Trump's lawyers have been too busy trying to deal with all his conflicts of interest to tell him about the Logan Act, so I introduced a bill that just makes it explicitly clear that the president-elect is just like every other private citizen during the transition period. They can't go around reporting to conduct U.S. foreign policy.

O'DONNELL: I just want to read the words of the Logan Act. As you said, this is very old law. We've never really had a prosecution under it, but it says that 'Any citizen who, without authority of the United States, directly or indirectly commences or carries on correspondence or intercourse with any foreign government or any officer or agent thereof, with intent to influence the measures or conduct of any foreign government or of any officer or agent thereof in relation to any disputes or controversies with the United States, or to defeat the measures of the United States shall be fined under this title or imprisoned for not more than three years.' It's a pretty clear prohibition against doing what we've seen Donald Trump doing. But does it concern you that there could be First Amendment implications in the Logan Act that haven't been tested?

HUFFMAN: Well, it's an act that hasn't been tested with respect to a president-elect because every previous president-elect has had the common sense and the impulse control to know that they need to show deference to the sitting president, and that we need only one president at a time. We're in uncharted waters because Donald Trump doesn't have those boundaries, and unfortunately, I think it's necessary to bring up the Logan Act. Yeah, there are First Amendment issues, but the First Amendment also has limits: One cannot yell 'fire' in a crowded theater. And I would suggest that conducting foreign policy, pretending to have the authority to do so around the world is a reasonable limitation on one's First Amendment rights.

Huffman's reference to Trump's lack of "common sense" and "impulse control" is key: This act is not being proposed simply out of usual partisan rancor, but rather in response to an incoming president who is so far outside the norms and customs of the office with regard to his statements and actions on issues of foreign policy that he risks causing major diplomatic quandaries even before he is officially inaugurated.

If Trump, like all presidents-elect before him, understood that his job did not actually begin until he takes the oath of office, then Huffman's bill would not have been necessary.

But since Trump continues to disrespect the current president, and to risk harm to the country in the process, the One President at a Time Act is precisely the correct admonishing response.