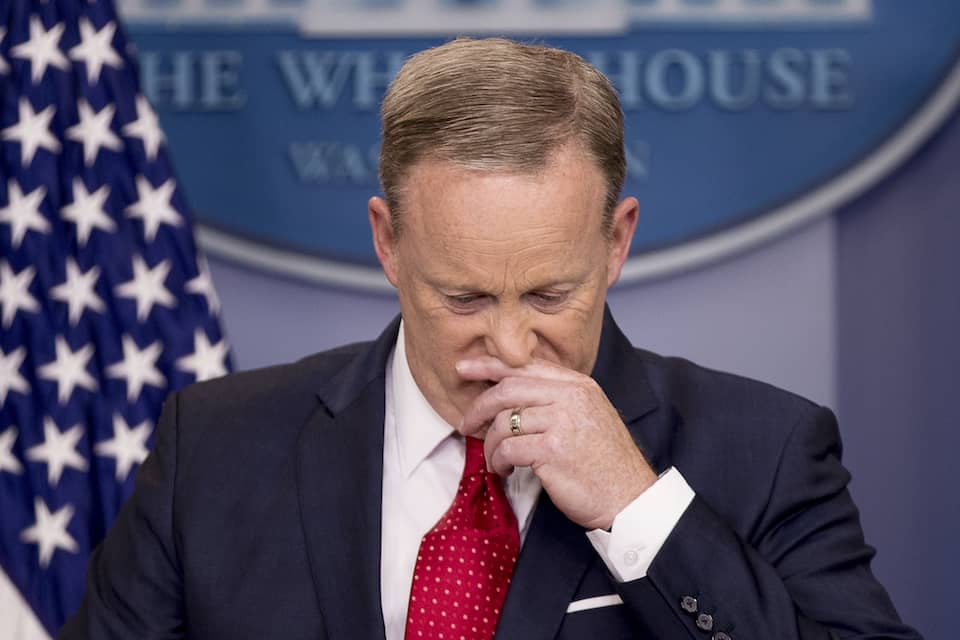 Republican attempts to repeal Obamacare have, thus far, been complete failures, due in part to the reluctance by many in the party to rip away benefits from their constituents, particularly coverage for pre-existing conditions. CNN's Jim Acosta vehemently challenged press secretary Sean Spicer on the GOP's plans to twist that coverage into something meaningless.

Despite Donald Trump's oft-repeated campaign promise that he would repeal and replace the Affordable Care Act, possibly on "day one" of his presidency, the law is still on the books, and the efforts to dismantle it have gone nowhere.

To give Trump something substantive to point to as an accomplishment — so to speak — in his first 100 days, House Republicans tried to push through a second repeal attempt. But to woo the conservative Freedom Caucus members, this version included a roll-back of Obamacare's ban on insurers denying coverage for pre-existing conditions.

Numerous Republicans were wary of scuttling components of the ACA that their constituents like and want to keep. So, to appeal to that sector of the party, the latest version of their repeal effort allows states to waive the requirement that insurers cover pre-existing conditions, while tacking on billions of dollars to ostensibly help fund the high-risk pools those waivers would create.

But this self-inflicted snafu could have easily been avoided if Trump and the Republicans simply left well enough alone. CNN's Jim Acosta challenged press secretary Sean Spicer on this issue, pointing out that their supposed "fix" would likely only make things more complicated and less popular.

SPICER: I wouldn't call it messing around, or however you phrased it. I think the president wants to do everything —

ACOSTA: Right now, people with pre-existing conditions are covered. They are not discriminated against.

ACOSTA: You're going to change to a system where who the hell knows what's going to happen? It depends on what state they live in. If they live in this state over here, that governor may seek a waiver and all of a sudden they are thrown into this system where hopefully that fund is going to cover their pre-existing conditions. It is a big change for people who live with those kinds of illnesses, is it not?

SPICER: Well, look, the big change — I don't — I guess we have a very different view of this, because my view, and I think the president's view, is that Obamacare — if you have a pre-existing condition and you no longer have a health care provider, or your premiums or deductible are going through the roof, then you don't have coverage. And we just read it out, I mean, I don't — if you have —

ACOSTA: So you're throwing the baby out with the bathwater?

ACOSTA: You repeal Obamacare because you're saying it's not working, but then why change pre-existing conditions?

SPICER: We're not. No, no, we're strengthening. Look, we have done everything we can do to not only strengthen but to guarantee —

ACOSTA: You're strengthening it, but a governor can say, 'Here's my waiver,' and no more pre-existing conditions?

SPICER: Sure you can, but Jim, I think the fundamental point that seems to be getting lost is that,
if you have Obamacare right now, in case after case, you are losing it. So if you have a pre-existing condition, and you have a card that says Obamacare, but no one will see you, or you can't afford it, then you don't have coverage.

ACOSTA: Why not fix that?

SPICER: We are, we're guaranteeing it, but I don't know how much —

ACOSTA: Why does the pre-exisiting conditions component have to be altered? Why not just keep that protection in place?

SPICER: The president has made it very clear that pre-existing conditions are covered in the bill under every scenario. I don't know how much clearer we can state it.

ACOSTA: So, anybody who has a pre-existing condition, under Trumpcare, they are going to be fine?

SPICER: There you go.

If Spicer is confused about why people will not just take his — and thus, Trump's — word for it on a subject like health care, it could be because members of his own party are not even trying to cloak their mendacity. Rep. Mark Sanford (R-SC) recently made a stunning, and unusually forthright, statement that the GOP has run on "false advertising from the start," and that "full repeal was, in essence, a pipe dream" from the get-go.

Not to mention that the party is led in Congress by a man who claimed to have spent his college years hanging out at keg parties and "dreaming" of kicking poor and disabled people off of their health insurance.

Surely, even Spicer can see why his "guarantee" may not put people's minds at ease. If not, he can always watch his own briefing and witness Acosta tearing his arguments apart.