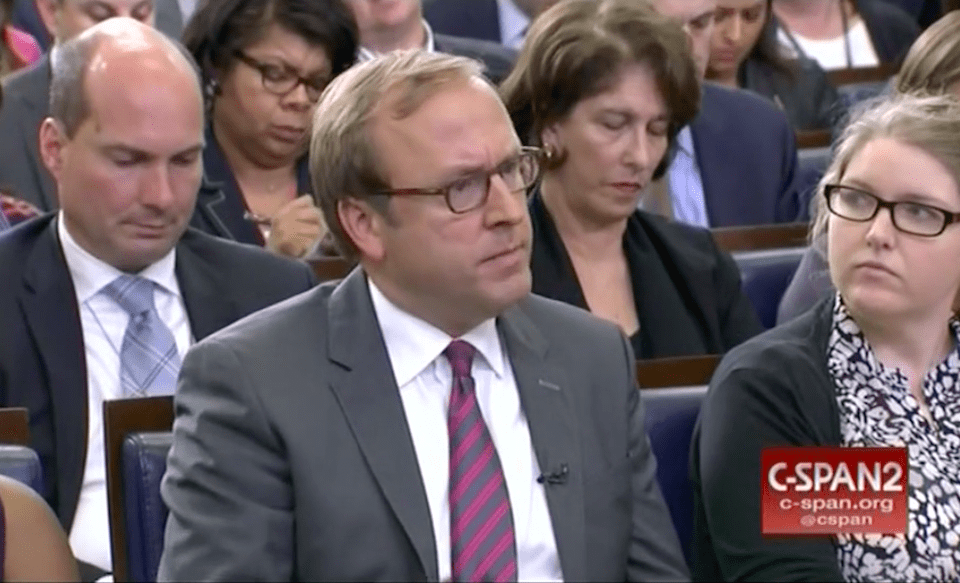 Even for Donald Trump, his latest statements about North Korean dictator Kim Jong Un were shocking. In recent interviews, Trump said he would be "honored" to meet with Kim "under the right circumstances," and called Kim "a pretty smart cookie."

ABC News Chief White House Correspondent Jonathan Karl pressed White House Press Secretary Sean Spicer on both quotes at the daily press briefing, and while it is difficult to imagine a "good" answer to either of them, Spicer managed to give two of the worst responses.

First, he seemed to intimate that despite Kim's shortcomings, his stature as a head of state still makes such a meeting an honor of sorts. And he also appeared to reinforce Trump's praise of Kim at some length:

KARL: The president didn't just say that he would be open to meeting with Kim Jong Un under the right circumstances, he said he would be "honored" to meet with him. This is somebody who has starved his own people, somebody that has threatened to destroy the United States. Just last week, he put out a video showing the Capitol getting destroyed by North Korean fighters. How could he be "honored" to meet with Kim Jong-un?

SPICER: Well, the president understands the threat North Korea poses, and he will do whatever is necessary, under the right circumstances, to protect our country from the threat that they pose.

KARL: How could that be an "honor?"

SPICER: Well, Jonathan, I guess because he is still a head of state, so it is, sort of. There's a diplomatic piece to this. But the bottom line is, the president going to do what he has to do. Right now, he's building a coalition in the region to isolate North Korea both economically and diplomatically to get the threat — to take that threat down. So — but that is his number one priority right now, protecting this country and our people.

KARL: What did he mean when he called him "one smart cookie," or "a pretty smart cookie?"

SPICER: I think his points was — he went over this in the interview — that he assumed power at a young age, when his father passed away, and there was a lot of potential threats that could have come his way, and he's obviously managed to lead a country forward. Despite the obvious concerns that we and so many other people have, you know, he is a young person to be leading a country with nuclear weapons. And so that set aside, I think the president recognizes the threat that he poses, and is doing everything he can to isolate that threat, and to make sure that we bring stability to the region.

We have long covered Trump's bizarre appreciation for dictators, but now, the mainstream political press is waking up to this disturbing quality, as well. Moments later, The New York Times' Glenn Thrush noted Trump's recent string of praise for strongmen like Kim, Turkey's President Erdogan, and the Philippines' Rodrigo Duterte, and asked if Trump has "a thing" for totalitarian leaders.

Given Trump's despotic record, there's little wonder he admires these birds of an authoritarian feather. Finally, the media seem to have awoken to this trend.