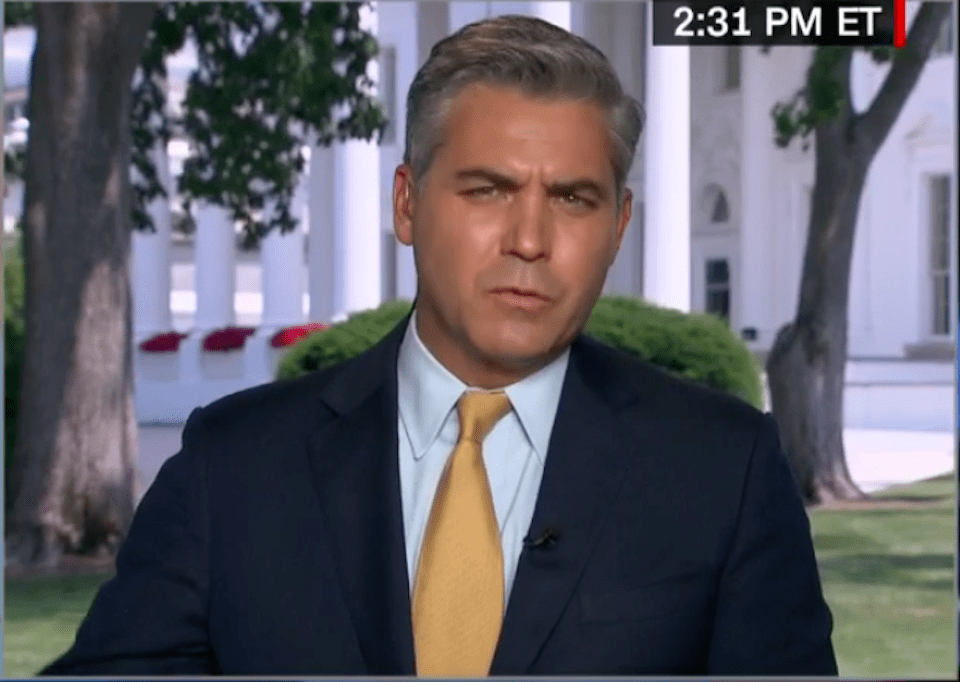 CNN reporter Jim Acosta laid into the White House for its ongoing ban on recording of the daily press briefing, calling them out for suppressing information.

CNN reporter Jim Acosta had harsh words for the Trump administration's decision to hold yet another off-camera press briefing.

It has been a week since the White House press operation, led by press secretary Sean Spicer, has spoken on air about the multiple controversies, scandals, and legislative issues swirling around the Trump presidency.

The White House has forbidden the press from recording the briefings with Spicer, banning the use of video or audio to capture the exchanges between the press and the administration.

Acosta pointed out that Spicer is "just kind of useless" since "he can't come out and answer the questions" being asked by reporters in the White House press corps.

He described the situation as "bizarre," pointedly adding, "This just isn't how we do things in this country, but for whatever reason we're all going along with it."

"I don't know why everyone is going along with this." @Acosta says maybe reporters should have skipped Spicer gaggle https://t.co/hsOtOJC6a0

ACOSTA: So the White House Press Secretary is getting to a point, Brooke, where he's just kind of useless. You know, if he can't come out and answer the questions and they're just not going to do this on camera or audio, why are we even having these briefings or these gaggles in the first place?

I don't know why everybody is going along with this. It just doesn't make any sense to me, and it just feels like we're sort of slowly but surely being dragged into what is a new normal in this country, where the president of the United States is allowed to insulate himself from answering hard questions. He hasn't had a full-blown press conference since February. He has these two plus two press conferences with a foreign head of state, where maybe he'll take a question from a conservative news media reporter, and then somebody from the mainstream media.

This isn't how we do things in this country, but for whatever reason we're all going along with it. I don't understand why we covered that gaggle today, quite honestly, Brooke. If they can't give us the questions – the answers to the questions – on camera or where we can report the audio, they're basically pointless at this point.

Acosta offered an initially amusing take on Twitter, but went on to point out that Spicer took a question from a Russian reporter but not CNN, using the hashtag "#pravda" to criticize the exchange. He also called out the "suppression of information," declaring that the White House "should have the backbone to answer questions on camera."

The Spicer off-camera/no audio gaggle has begun. I can't show you a pic of Sean. So here is a look at some new socks I bought over the wknd pic.twitter.com/wO9erspwYa

At off camera no audio briefing, Spicer took a question from a Russian reporter but not from CNN. #pravda

There is a suppression of information going on at this WH that would not be tolerated at a city council mtg or press conf with a state gov.

Call me old fashioned but I think the White House of the United States of America should have the backbone to answer questions on camera.

The press has become window-dressing for Trump's actions, a backdrop for the White House team to use instead of being allowed to operate as a watchdog on democracy. The daily press briefings have already been a farce, and the new ban has made the situation even worse.

It is crucial for members of the media, like Acosta, to push back on this scheme and to demand transparency and honesty for the American people.