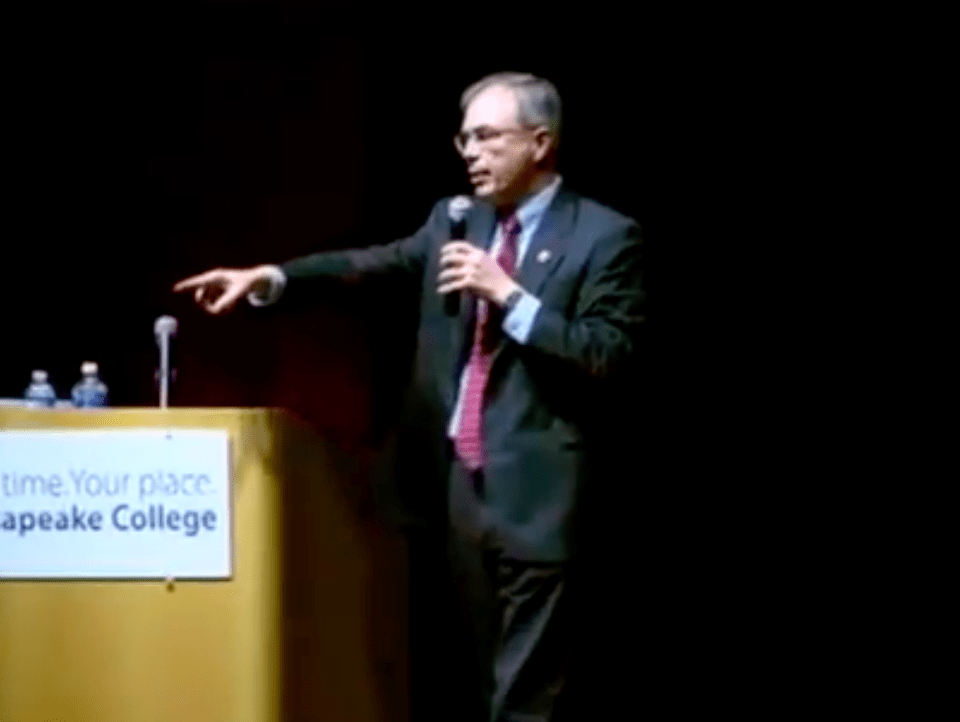 Republicans continue to have a tough time at town hall meetings, and Rep. Andy Harris' (R-MD) event at Chesapeake College was no exception.

It's becoming a trend. Earlier this month, in response to being called out by angry constituents during a town hall meeting, Rep. Joe Barton (R-TX) yelled at one of them to "shut up."

This time, things got ugly in a hurry for Rep. Andy Harris's (R-MD) town hall meeting at Chesapeake College in Wye Mills, Maryland.

As the Freedom Caucus member presented a Power Point presentation on his views about health care, the crowd booed and jeered him loudly.

At one point, Rep. Harris threatened a woman in the audience, telling her he'd have her thrown out if she didn't stop yelling:

Andy Harris is having a rough night. "Ma'am, if you yell like that one more time, I'm going to ask campus security to take you out of here!" pic.twitter.com/xBRlejOLKh

Ma'am, if you yell one more time like that, I'm going to ask campus security to take you out of here! Thank you!

Now, you may not want to hear about Alzheimer's now, but you will at some point in your life. You will. Now, so beyond health care, again, talking about insurance is important, we have to deal with diseases, like Alzheimer's, that in the end, will truly bankrupt our health care system. Anyway, with that, I think that's the last slide.

The crowd was having none of it, as John Fritze of the Baltimore Sun reported:

Rep. Andy Harris to woman in front row of rows hall on Eastern Shore: "If you yell one more time like that..." Crowd goes ballistic.

Resistance from constituents like these helped defeat the Republican health care repeal plan, and Harris' town hall is an indication that people are keeping up the energy of that resistance. Maybe Harris is right, maybe that really is his last slide.