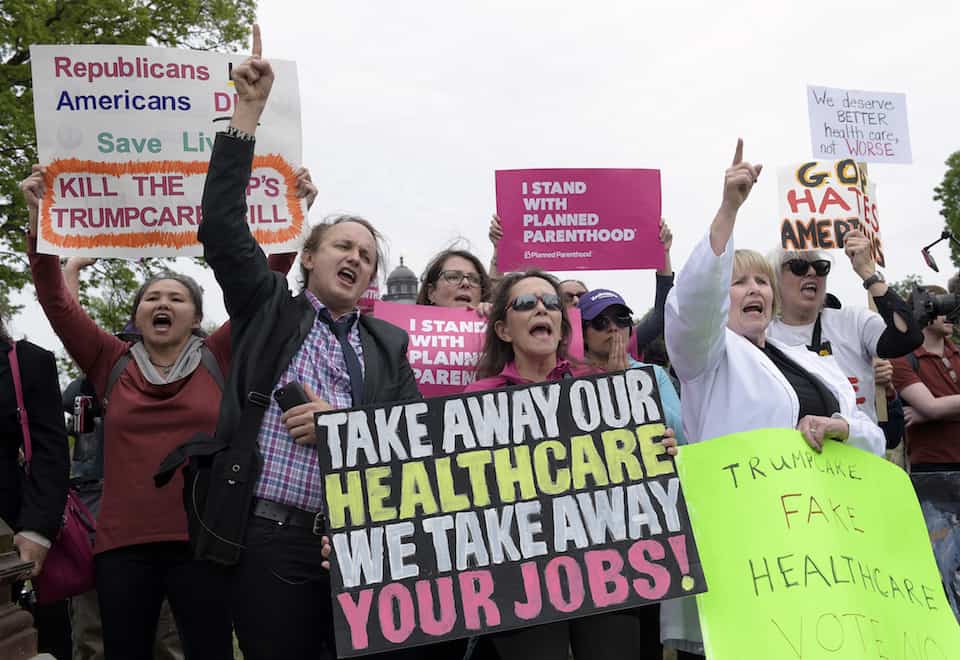 The Congressional Budget Office has finally released its updated review of the Obamacare repeal bill. Republicans solved none of the first bill's problems and added some new ones.

Republicans took a massive gamble by forcing a vote on their health care repeal bill before the Congressional Budget Office had time to review it. Some commentators wondered whether the bill might in fact have so many budget flaws that it would no longer even reduce the deficit, meaning it would violate Senate rules and the House would have to redo it.

Now, the CBO has finally released its report. Republicans did at least manage to avoid breaking the deficit rule, but nonetheless, the CBO's review is absolutely devastating. The revised "American Health Care Act" solved none of the serious problems in the first failed draft, and actually managed to make it worse.

To begin with, the number of people kicked off their health insurance plans between now and 2026 is virtually the same as it was in the old repeal bill — 23 million. And the deficit reduction is actually worse — just $119 million in the new bill versus $151 million in the old bill.

When it comes to coverage for people with pre-existing conditions, the news is even worse.

The impact of the MacArthur Amendment, which allows states to drop requirements that currently exist under Obamacare to cover people with pre-existing conditions if they set up "high-risk pools" for those patients, is especially brutal. The CBO estimates it could destabilize insurance markets in one-sixth of the country, with so many healthy people opting out and premiums increasing so much that insurance becomes unaffordable for everyone in some states.

The CBO says that, despite the extra money from the Upton Amendment, the high-risk pools cannot cover as many people as comprehensively as Obamacare's community rating:

People who are less healthy (including those with preexisting or newly acquired medical conditions) would ultimately be unable to purchase comprehensive nongroup health insurance at premiums comparable to those under current law, if they could purchase it at all—despite the additional funding that would be available under H.R. 1628 to help reduce premiums.

In particular, the report notes, "out-of-pocket spending on maternity care and mental health and substance abuse services could increase by thousands of dollars in a given year for the nongroup enrollees who would use those services."

This bill would, in short, result in far more low-income and sick people who are either uninsured or paying way more money for way fewer benefits.

This @USCBO report again confirms that the American Health Care Act will lower premiums and the deficit. https://t.co/kmjeUP2qqF pic.twitter.com/YJnXUyD3xO

Ryan left out the fact that the only reason the bill lowers premiums is insurers can deny people basic health services. But the American people are not fooled — polls continue to show the bill is extremely unpopular, with only 38 percent of people in favor.

Senate Minority Leader Chuck Schumer immediately condemned the bill and called on Republicans to stop trying to destroy the popular and effective Obamacare that the majority of Americans do not want to lose:

This report ought to be the final nail in the coffin of the Republican effort to sabotage our health care system. Republicans in Washington and the President should read this report cover to cover, throw their bill in the trash, and begin working with Democrats on a real plan to lower costs for the American people.

Pelosi also said that this disastrous bill "is a billionaire’s tax cut disguised as a health care bill: one of the largest transfers of wealth from working families to the rich in our history."

The Democratic Congressional Campaign Committee also condemned the bill in a statement, calling it "morally bankrupt" and warning that it "will cause incredible pain for hardworking Americans, and that’s why its passage will haunt every single House Republican through Election Day.”

The bill is especially brutal for women.

"The American Health Care Act is the worst legislation for women’s health in a generation," said Dawn Laguens, executive vice president of Planned Parenthood Federation of America, in a statement.

"This bill cruelly slashes Medicaid — which one in five women of reproductive age rely on — while prohibiting millions with Medicaid coverage from getting health care at Planned Parenthood. ... The Senate must reject this bill.”

EMILY's List also blasted the bill in a statement with a stern warning: "Republicans who voted for this bill should be very worried about their chances in 2018.”

Republicans believed if they could rush their bill through quickly enough, none of its problems would matter. The CBO has brought everyone back to reality. The American people must do everything in their power to stop this cruel, destructive farce.