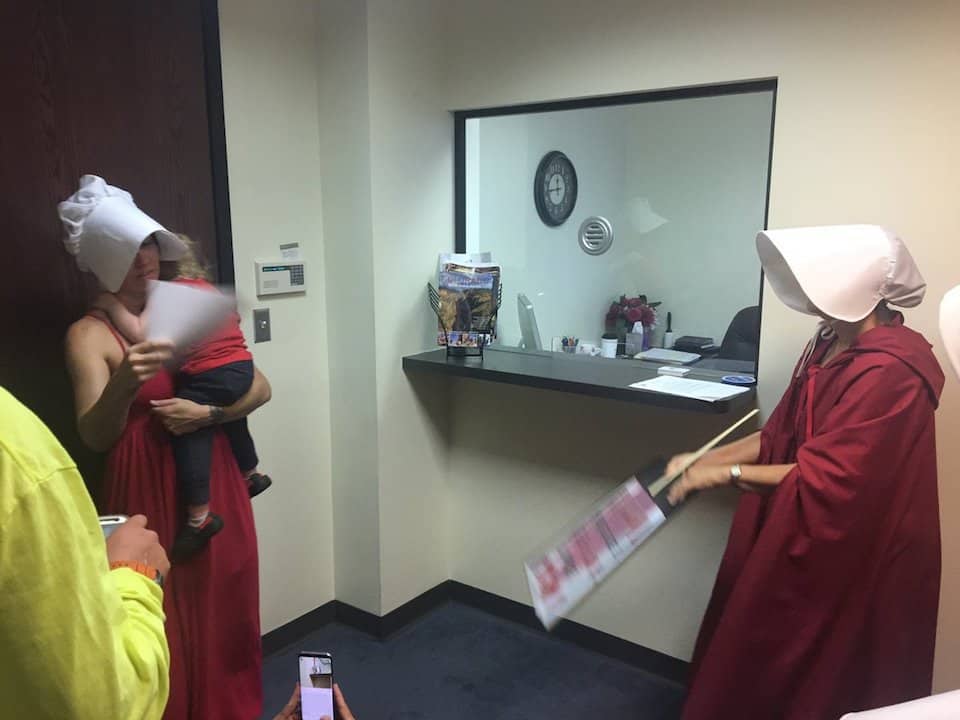 Jessica Lawyer/Twitter
Get The American Independent in your inbox

When a group of women showed up at Republican Sen. Cory Gardner's office in Colorado Springs to protest his party's health care bill, the office cranked up the heat to try to drive them out.

Staffers for Republican Sen. Cory Gardner, who represents Colorado, turned up the heat on protesters who showed up at his office to oppose the Senate health care bill.

Temperatures in Colorado Springs, where Gardner's office is located, hit a high of 90 degrees, but protester "Jessica Lawyer" said the senator's staff "won't let us leave the door open to let fresh air."

Noting that "they're trying to heat us out of here," Lawyer posted photos and video of the protesters, wearing costumes patterned after "The Handmaid's Tale," persisting despite the oppressive conditions in the office.

On the video, the protesters can be seen using their signs as fans to cool off in the hot office, as Gardner's receptionist looks on. One woman is discussing the provisions in the Senate bill that would "defund" Planned Parenthood and leave millions of patients high and dry.

Republican members of Congress have been trying to avoid voters as backlash to their health care proposals has risen. They do not want to face the public who would be crushed by the massive cuts to Medicaid that would strip insurance coverage from millions if the bill is allowed to pass.

Gardner was part of the secretive all-male team of Republicans who put the bill together. Colorado voted for Hillary Clinton in 2016.