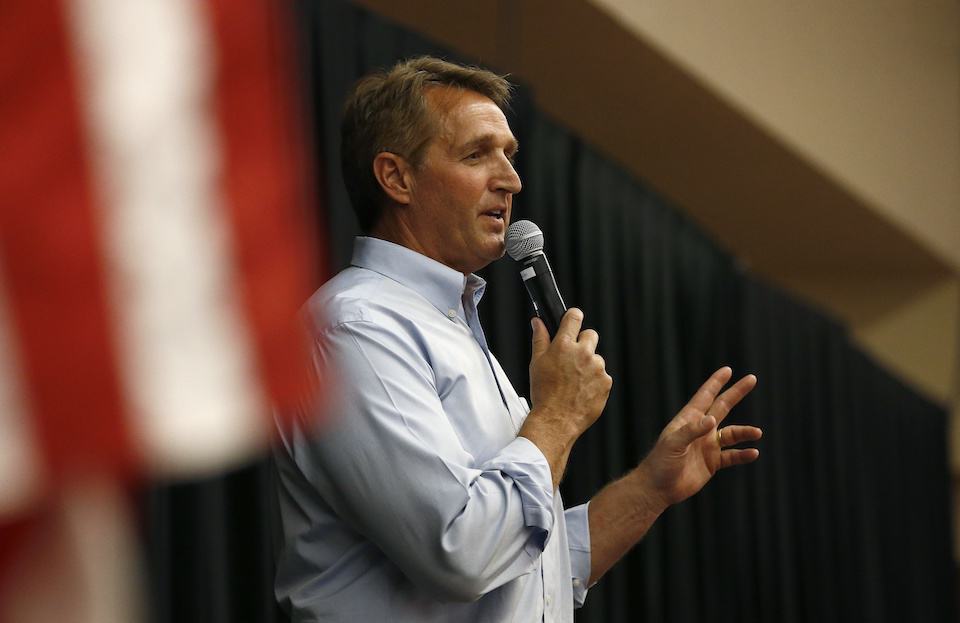 Republican Senator Jeff Flake had a rough night at his town hall in Mesa, Arizona, led by a 16-year-old who dressed him down for standing against Planned Parenthood.

The resistance at town halls has become a huge political force, and it comes in all shapes and sizes. Republican Senator Jeff Flake (R-AZ) found that out when his Mesa event turned into two hours of relentless pushback from constituents, mainly on the issue of health care, and women's health care in particular.

The evening was best summed up, however, by a particularly self-possessed 16-year-old constituent who identified herself as Deja Foxx, and who quizzed Flake on his support for defunding Planned Parenthood. Flake took several shots at condescending to her, but in the end, an utterly defeated Flake could only weakly smile, thank her, and move on:

FOXX: Jeff Flake. My name is Deja Foxx, and I'm a 16-year-old from Tucson. I just want to state some facts. So, I'm a young woman, and you're a middle-aged man.

FOXX: I'm a person color and you're white. I come from a background of poverty, and I didn't always have parents to guide me through life. You come from privilege. So I'm wondering, as a Planned Parenthood patient and someone who relies on Title X, who you are clearly not, why it's your right to take away my right to choose Planned Parenthood, and to choose no-copay birth control, to access that. So if you can explain that to me, I would appreciate it.

FLAKE: Well, thank you. I'm glad to hear of my privileged childhood. I have a few of my sisters here. I'm one of 11 kids, I'm right in the middle of 11. I didn't grow up privileged, I paid for my college on my own, all on my own, so could I have — I do have — I am fortunate, I am fortunate that I do have a wonderful job representing the state of Arizona and I, and I want to ...

FOXX: Privilege comes in many forms.

FLAKE: You bet it does, and I've had a lot of advantages that others haven't, and what I want is to make sure that everyone can realize the American dream that all of us have been successful at. So that's that's what I'm trying to do, and that's why I support the policies that I support.

FOXX: And if no-copay birth control is helping me to be successful, to reach for higher education, and Planned Parenthood is doing that as well, why would you deny me the American dream?

FLAKE: Thank you, that's a great question. I wouldn't deny anybody the American dream.

FOXX: No, thank you.

Aside from the clear moral and substantive reasons to support access to Planned Parenthood, Republicans ought to wake up and recognize that they are on the wrong end of this issue politically. Badly so.

In a recent poll, the percentage of people who oppose cutting Planned Parenthood funding is often quoted as 62 percent, already a monster of a number. But when the question specifically mentions that federal funds to Planned Parenthood are only used "only for non-abortion health issues such as breast cancer screening," the overall number opposed to cutting funding jumps to 80 percent, including 65 percent of Republicans.

With only 17 percent support for their repeal plan, and 12 percent support for defunding Planned Parenthood, Republicans could be on their way to a crushing defeat in the midterms. But this is also a reminder that elections, even even when the "winner" loses the popular vote, have consequences.

Despite massive bipartisan support for Planned Parenthood, Donald Trump just signed into law a bill that attacks funding for family planning. It will be a long 18 months until those midterms, and voices like Deja's are crucial to putting the brakes on this extreme and minority agenda.