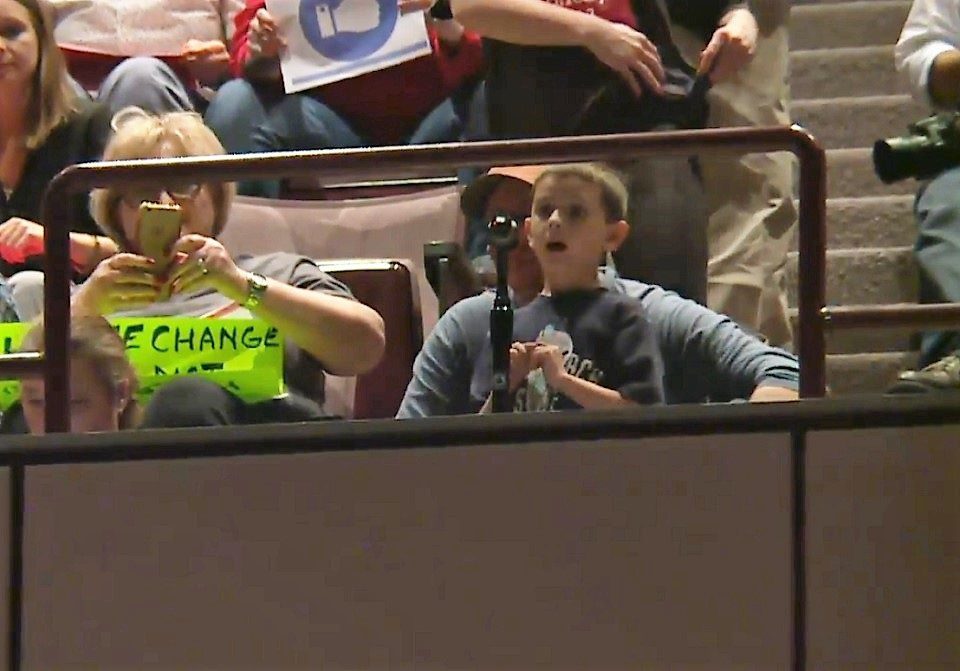 The massive resistance which has been roiling at Republican town halls all across the country has found a powerful, if small, voice in Toby, an "almost 8" year-old constituent who handily outclassed Senator Tom Cotton (R-AR) at a town hall meeting in Springdale, Arkansas.

It was the final question at Senator Tom Cotton's (R-AR) town hall meeting in Springdale, Arkansas, and it was a doozy.

After a raucous hour-and-a-half grilling by constituents, Cotton called on a little boy named Toby Smith, who wanted to know why Donald Trump wants to cut funding for PBS, while wasting money on an absurd border wall and demonizing Mexicans.

While the kid was sharp and adorable, the stream of nonsense with which Cotton answered him was the real story:

COTTON: I'm sorry, what was your name, bud?

TOBY: So, Donald Trump thinks a wall is more important than kids' games and stuff, but to kids, it's more important. Donald Trump makes Mexicans not important to people who are in Arkansas who like Mexicans, like me, and my grandma, and all my people. (crowd roars) And he is deleting all the parks and PBS Kids just to make a wall (crowd cheers) and he shouldn't do that. He shouldn't. He shouldn't do all that stuff for just a wall.

COTTON: Tony, how old are you?

COTTON: Thank you. Toby! Sorry, Toby, T-O-B-Y. Sorry. Toby, thank you for coming, I know a lot of seven year-olds, this isn't their idea of fun, but I appreciate you being here. And I just want to say that whatever your background, whatever your heritage, whatever your race or ethnicity or religious belief, part of the fabric of America is that we are a melting pot, that we are all one people, and (crowd noises) and we want Mexico to be a healthy, strong partner. We want to help them to deal with the problems that they've got with drug cartels and crime, and grow their economy. But we also —

COTTON: We also have to protect our own citizens from that, and that's where the wall comes in. (crowd jeers) So, Toby, you can still have one, and have the other. So, ladies and gentlemen, I'm sorry, I've got another appointment I have to get to.

As we have reported, Trump has broken his promise to make Mexico pay for the border wall, which could cost up to $20 billion or more and will be paid for by U.S. taxpayers, while PBS and other arts programs are on the chopping block in the upcoming budget. Toby may, indeed, have made some news if he managed to get Cotton to oppose funding cuts to PBS, but it is a rare thing indeed for a United States Senator to regale a seven year-old with tales of crime and drug cartels. And it was a moment that beautifully exposed the absurdity of this administration's policy agenda.

More than anything, though, scenes like this show that even in Trump's America, everyday Americans, no matter how small, still have a voice — and can join the resistance.