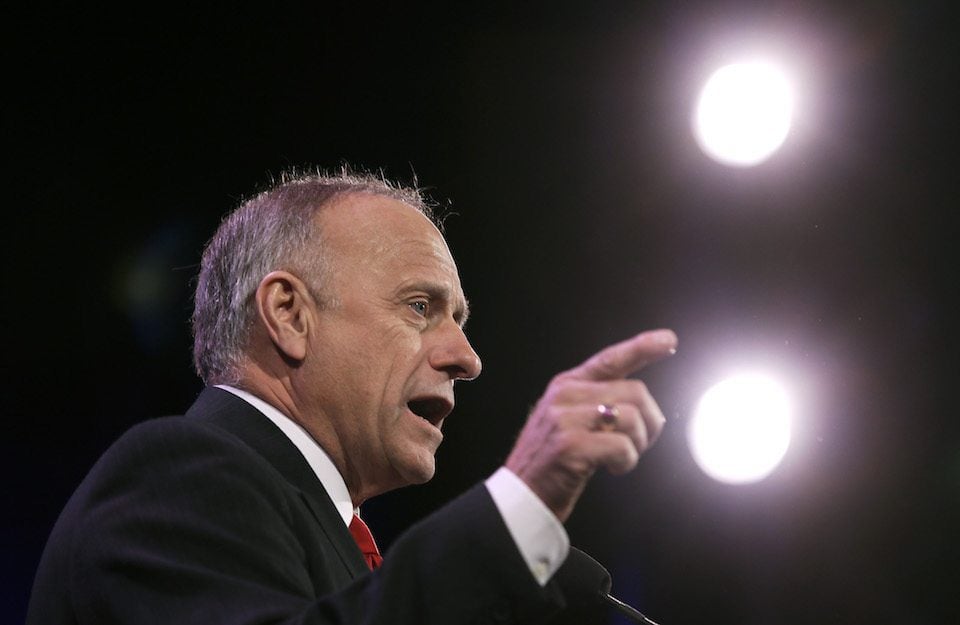 Rep. Steve King (R-IA) told CNN that he would like to cut spending on food assistance programs for vulnerable Americans, in addition to funding for Planned Parenthood, and put that money toward building a border wall on the southern border.

King is a diehard Trump supporter, with a considerable history of racist, sexist, and homophobic comments and positions. He recently took the ludicrous position that President Barack Obama contributed to the hostility that led to the shooting of Rep. Steve Scalise.

CNN anchor Alisyn Camerota asked King if he was comfortable using $1.6 billion of U.S. taxpayer money to build the theoretical — and useless — wall, as Mexico has repeatedly made clear that it will not pay for it, despite Trump's claims during the campaign.

King said he was comfortable with wasting money in this manner and added, "I’d throw another $5 billion on the pile, and I would find half of a billion of dollars of that right out of Planned Parenthood’s budget. And the rest of it could come out of food stamps and the entitlements that are being spread out for people who have not worked in three generations."

“Planned Parenthood receives federal funding the same way as every other hospital or community health care provider," she said in a statement, "through Medicaid reimbursements for specific services provided, including birth control and cancer screenings."

In other words, there is no half a billion dollars in the federal budget for Planned Parenthood, as King wrongly claims.

King also argued that food assistance programs should be looked at to examine if they play a role in obesity, strangely citing former first lady Michelle Obama's efforts to combat childhood obesity by advocating for healthy school lunches. King concluded his rant, "When you match up the EBT card with what the scales say on some of the folks, I think it's worth looking at."

CAMEROTA: Are you comfortable, Congressman, with providing $1.6 billion of taxpayer money, not from Mexico, to build that wall?

KING: Absolutely, yes and more. And I'd throw another $5 billion on the pile, and I would find a half of a billion dollars of that right out of Planned Parenthood's budget and the rest of it could come out of food stamps and the entitlements that are being spread out for people who haven't worked in three generations. We've got to put America back to work, this administration will do it. And we've got to free them up so they can support the right agenda for this country.

CAMEROTA: You want to take food from people who are the people on the lowest rung in terms of the nation's safety net and their children in terms of food stamps, you're happy – you're willing to take money from them to build or give the $1.6 billion for the border wall?

KING: For a couple of reasons. One of them would be that we will create the kind of security that would bring about 10 million new jobs in America just by enforcing immigration law. The second thing is, I wouldn't impose anything more strict on anybody in America than what Michelle Obama did with her school lunch program. I would say let's limit for that, anybody who wants to have food stamps up to the school lunch program. That's fine. We have seen this go from 19 million people on SNAP program up to 47 million people on the snap program.

CAMEROTA: You don't think all of them need it?

KING: I'm sure that all of them didn't need it. We need to set this down and ratchet it back down again. We built the programs, because to solve the problem of malnutrition in America. Now we have a problem of obesity. When you match up the EBT card with what the scales say on some of the folks, I think it's worth looking at. Michelle Obama looked at it, Republicans should be able to look at it too.

King's idea to punish the poor and unfortunate in service of harebrained conservative schemes is in line with Trump-era Republicans, who have called for cuts to food assistance while championing health care legislation that punishes people who rely on programs like Medicaid.

King's only true mistake is saying out loud in blunt terms what figures like Trump, Speaker Paul Ryan, and Majority Leader Mitch McConnell all support in legislation and policy.

Despite his blatant bigotry, King has repeatedly won re-election to his congressional seat since 2003. He attracted a Democratic challenger earlier this year, but despite fundraising success, she was forced out of the race after receiving death threats.