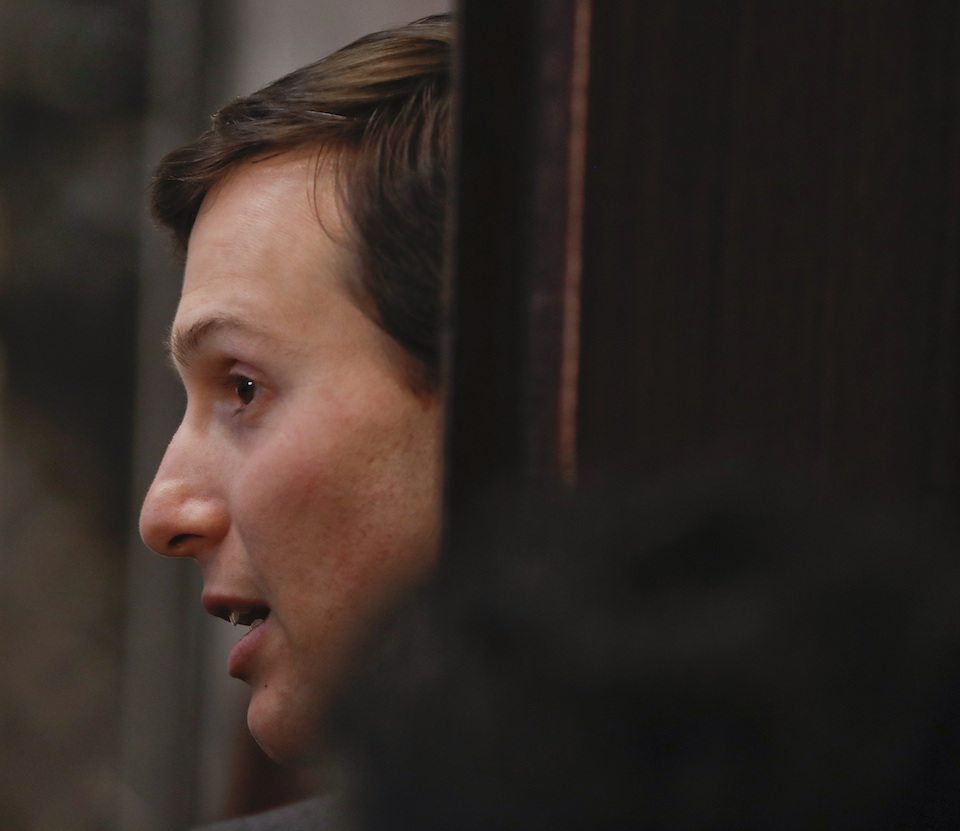 Jared Kushner issued an 11-page defense on charges of Russian collusion. His statement is full of holes, but for now he gets to hide from public view.

Adhering to his strange habit of refusing to speak in public, senior White House aide Jared Kushner will meet in private with the Senate Intelligence Committee Monday to discuss allegations that he and the Trump campaign colluded with the Russian government during last year’s election.

Kushner then meets in private with the House Intelligence Committee on Tuesday. In neither session will Kushner testify under oath.

By allowing Kushner to avoid the public spotlight and the close scrutiny of open testimony viewed on live television, the Republican-controlled Congress continues to enable the White House’s effort to explain away the scandal. (Closed-door testimony is often used when classified information is being discussed. That does not appear to the be the case with Kushner’s appearances.)

In an 11-page statement released Monday in advance of his intelligence committee sessions, Kushner denies ever colluding with the Russian government. “I did not collude, nor know of anyone else in the campaign who colluded, with any foreign government. I had no improper contacts,” he insists.

The entire statement adopts a “trust me” defense strategy. Kushner claims he was often overwhelmed during the campaign, and sometimes naive, even though his new statement includes revelations that directly contradict previous White House spin on the sprawling Russia scandal.

Kushner confirms that he did in fact meet Russian Ambassador Sergey Kislyak last year at a foreign policy speech that Donald Trump gave at the Mayflower Hotel in Washington, D.C. Previously, Kushner’s spokesperson denied any such meeting ever took place.

And of course that’s been the larger Trump team pattern: categorically deny any previous contacts with Russian operatives, until proof emerges to confirm that all sorts of contacts took place.

As the Wall Street Journal notes:

Following Mr. Trump’s victory on Election Day, the White House repeatedly denied that there had been any contacts between his campaign and Russian officials. “It never happened,” spokeswoman Hope Hicks told the Associated Press in November. “There was no communication between the campaign and any foreign entity during the campaign.”

As for the June 2016 meeting set up by his brother-in-law Donald Trump Jr., where a representative from “the Russian government” promised to deliver incriminating information on Hillary Clinton, Kushner claims he didn't really read the email chain about the meeting to know what the subject matter was. Instead, he showed up late, was bored and didn’t think anything of it.

That is almost exactly the same cover story Trump Jr. first offered in an attempt to downplay the meeting. His explanation quickly unraveled as more damning information poured out about how Russians were trying to collude with the Trump campaign.

The defense Kushner issued Monday, as he tries to explain away all kinds of tangled alliances, would make for riveting public testimony and political theater when confronted by skeptical questioners on the House and Senate intelligence committees.

But for now, Republicans are shielding Kushner from public scrutiny.