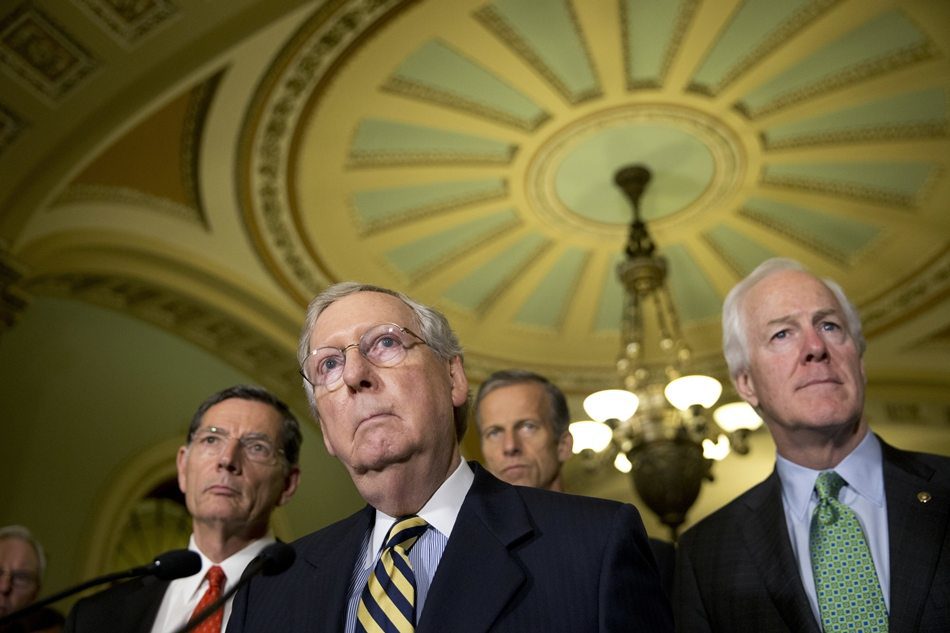 When their presidential candidate needs some props to make him seem more acceptable, Flint residents matter to Republican leaders, but when it's time to fund emergency relief to a city poisoned under the watch of a Republican governor, the shoulders get mighty cold. Now, Republicans are willing to risk shutting down the government rather than send Flint the money that the Senate already voted for 95-3.

The people of Flint, Michigan made a fine political backdrop for Republican presidential candidate Donald Trump when he needed to convince white voters that he's not an uncaring bigot, but when it comes to actually helping the folks who have been suffering through a GOP-caused water crisis, the party's lawmakers are prepared to let the government shut down rather than help fund recovery efforts.

September 30 is the deadline for Congress to pass a continuing resolution to fund the government and avoid a shutdown, a game of chicken that has become standard operating procedure for Republicans in the age of Obama, as has using crucial funding bills to push ideological agenda items.

This time around, Democrats have managed to defeat measures aimed at denying Zika virus funding to women's health care providers allied with Planned Parenthood and a tag-team effort by Ted Cruz and Donald Trump to obstruct new internet regulations, but they can't get Republicans to pony up $100 million for Flint to go along with the $500 million that has been included for Louisiana flood relief. Republicans have also kept in a rider that would help special interests funnel money into political campaigns without having to disclose it by preventing the Securities and Exchange Commission (SEC) from implementing such a disclosure rule.

The White House has said that President Obama is not prepared to sign a continuing resolution that doesn't address the Flint crisis or drop the SEC rider, and Senate Minority Leader Harry Reid excoriated Republicans for failing to secure funding for Flint. "One-hundred thousand Flint residents continue to struggle providing clean drinking water to their families," Sen. Reid said on the floor of the Senate, adding that "Flint, Michigan is a community of color, African Americans," but that Louisiana Sen. Bill Cassidy "was especially callous in dismissing the people of Flint. He called the emergency in Flint, quote: 'other people's grief.'"

Reid urged Cassidy to "look out for the people suffering in Louisiana without turning a cold shoulder on his fellow Americans in Michigan."

As Reid explained, the Senate voted 95-3 in favor of aid for Flint several weeks ago as part of a water infrastructure bill, the Water Resources Development Act, but that funding was not acted upon by House Republicans, which is why Democrats are forcing the issue using the continuing resolution. On Tuesday, Democratic Senators Reid, Durbin, Schumer, Murray, Mikulski, Boxer, Stabenow, and Peters sent a letter to Leader McConnell and Speaker of the House Paul Ryan urging them back to the negotiating table:

We are eager to resume negotiations to try and arrive at bipartisan agreement that eschews ideological riders, such as the prohibition on the Securities and Exchange Commission (SEC) from finalizing rules on the disclosure of corporate political spending, and are prepared to work with you to immediately pass legislation to fund the federal government until December provided that it does not leave behind communities across the nation dealing with devastating lead contamination, historic flooding, the Zika virus, and other emergencies. We hope that you will be able to give us your commitment soon so that we can continue this important work.

Rep. Dan Kildee, who represents Flint's congressional district, has been applying pressure on House Republicans to bring Flint relief up for a vote:

When it comes time to take up a paid-for piece of legislation that will not increase the deficit, but will help these poor folks who cannot drink their water, what do we get? Shuffling of their feet. Stunned silence. Nothing, nothing. Shame. Shame! What would you do if it was your hometown? What would you do if it was your community? You know what you would do. You’d step to the floor of this house and you would make sure every single day you fought to get help for your community.

One of the first votes I cast when I came here was to help victims of a storm that was nowhere near my home and I was proud to do it because they were Americans who happened to be in need. What is it about Flint? What is it about the people of Flint? Answer me. What is it that separates them? That has them in a position where their federal government can’t come to their aid when they can’t drink the water? When the water that comes from their tap is poison and we have a chance to do something about it without increasing the federal deficit with an offset that’s already identified? And I hear nothing. Nothing from the leadership of this House that gives any indication that the people of Flint matter at all. Shame. Shame.

We ought to act and we ought to do it now. Not maybe three months from now. Not, oh Flint, maybe we’ll get you in the next bill, maybe the next piece of legislation. Shame.

Rep. Kildee told me, by phone, that while he believes race is a factor, he doesn't believe it's overt, but rather the "subtle bias of neglect" that has allowed this situation to get this far, and he's quick to point out that he has the support of many Republicans, including those in the Michigan delegation. "It's really the Republican leadership," Rep. Kildee said, "not wanting to stand up to the most extreme members of the party" who oppose the funding even after Democrats paid for the Flint relief with already-appropriated funds from the Advanced Technology Vehicles Manufacturing (ATVM) program. Emergency disaster relief funding doesn't typically need to be offset.

Kildee says he's willing to take Flint funding any way he can get it, in a continuing resolution or in the water resources bill, but "I'm not willing to wait for an election to be over. We've waited too long already."

Democrats have strong leverage in this fight because with Republicans in control of both chambers, voters will tend to blame them if a shutdown occurs. No matter how this particular funding battle shakes out, though, it is telling to note the ways in which the two parties utilize their leverage; Democrats to provide relief to poisoned children, and Republicans to hide sources of political donations.

Speaker Paul Ryan (R-Wis.) and Minority Leader Nancy Pelosi (D-Calif.) huddled twice Tuesday to iron out a dispute over what to do about the water crisis in Flint, Michigan. Democrats had demanded money to address the lead contamination issue be added to the CR, but Republicans say Flint should be dealt with in another bill.

The two worked out an agreement Tuesday evening that involves an amendment to authorize $170 million in water legislation that is slated to pass the House on Wednesday. That move appeared to satisfy Democrats seeking assurances that the beleaguered Michigan city would receive federal aid.