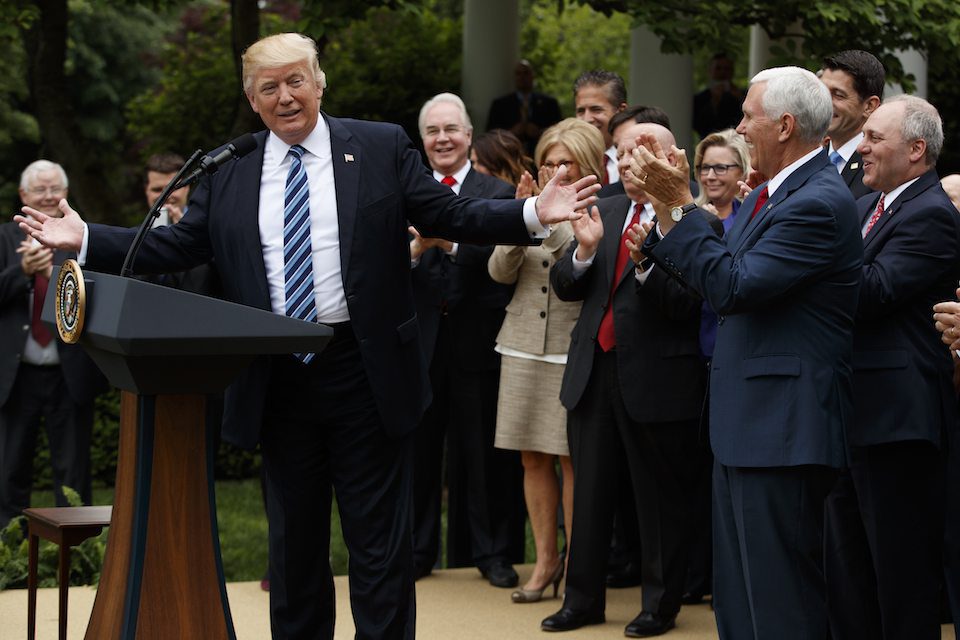 Donald Trump's failure to condemn white supremacist violence is a symptom of a much larger problem within the Republican party.

In a shocking press conference Tuesday, Donald Trump defended white supremacists and blamed “many sides” for the fatal violence that erupted days before at a neo-Nazi rally in Charlottesville, Virginia.

Trump’s unhinged statement was outrageous and beyond the pale. But as far as downplaying the growing problem of white supremacy and violent right-wing extremism in America, he was not alone. Republican leaders, as usual, are enabling him from the sidelines.

As Politico reported Monday, Democrats on the House Homeland Security Committee are pleading with their GOP colleagues to hold congressional hearings to look into the rise of white supremacist violence.

"Unfortunately, it has become clear we cannot count on President Trump for action," the Democrats wrote in a letter to committee chairman Mike McCaul (R-TX).

"Even before he was elected, many of us were concerned that his unwillingness to denounce and distance himself from white nationalists would be taken as tacit support by those ready to use violence to advance their racist ideology," the letter continued. "As leaders of the legislative branch of government, we must stand up to all ideologically-motivated violence."

But Republicans don’t seem to view white supremacist violence as a priority. Democrats have already called for such hearings twice this year, and numerous times in previous years, but their GOP colleagues have ignored the requests.

Because they are the minority party, Democrats cannot schedule and hold hearings on their own, so the responsibility for doing so falls on the shoulders of Republicans — an onus they have consistently shirked.

Even the bigotry-driven violence in Virginia, which led to the death of a young woman and injured 19 others, has not been enough to move McCaul to act. According to Dallas News, McCaul has once again refused to hold any standalone hearings focused on white supremacy and neo-Nazi extremism. Instead, he says Democrats can raise their concerns next month at an annual hearing to assess worldwide threats to the homeland.

This response — or lack thereof — should not come as a surprise to anyone. Republicans have consistently failed to hold Trump accountable as he elevated and aligned himself with white supremacists.

When Trump brought white nationalist Steve Bannon on as his chief strategist, Republicans did nothing. When he hired white supremacist Stephen Miller as a senior adviser, Republicans were silent. When he nominated lifelong racist Jeff Sessions to lead the Department of Justice, Republicans confirmed him unanimously.

Even as the FBI and the Department of Homeland Security are warning of the growing threat of white supremacist violence, Republicans still won’t even hold a hearing to address the problem.

Perhaps that’s because they, too, depend on the support of white supremacists, and have chosen to appease them rather than risk losing voters.