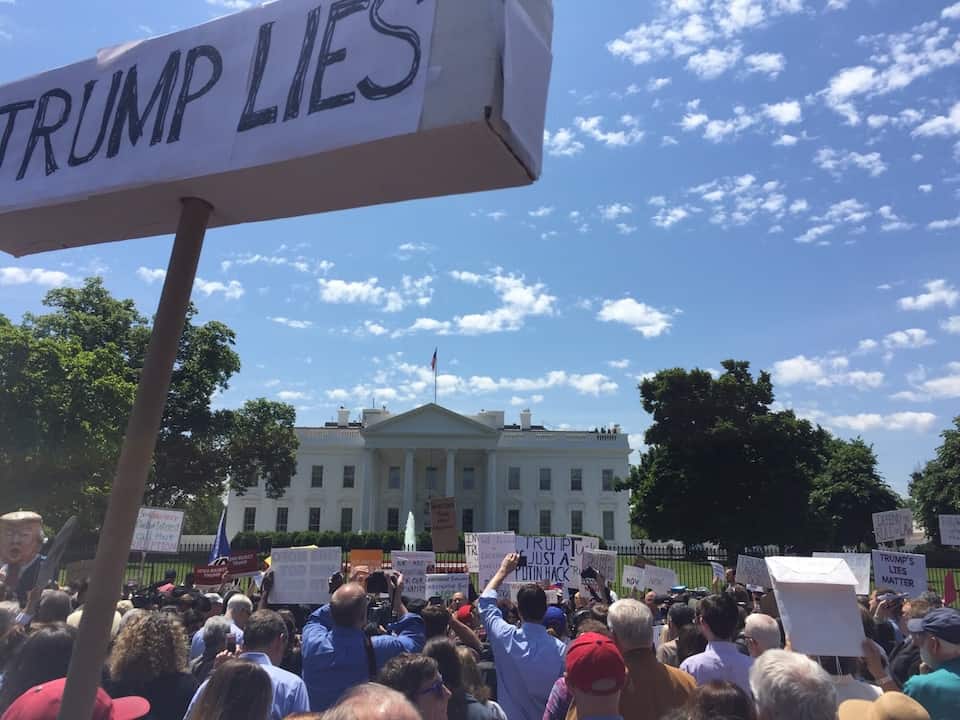 Erin Reed
Get The American Independent in your inbox

After the sudden firing of FBI Director James Comey, multiple demonstrations are now underway against Donald Trump's apparent power grab, including one right in front of the White House.

For all of Comey's faults, the president firing the top federal investigator in the middle of an investigation into the president's ties to Russia is deeply troubling. Some experts say it could constitute obstruction of justice. The fact that Attorney General Jeff Sessions was actively involved in the decision, despite promising to recuse himself from the investigation, only makes the stench worse.

The reaction on Capitol Hill was immediate. Multiple Democratic senators called the move "Nixonian," Minority Leader Chuck Schumer declared it a "cover-up," and even some Republicans expressed alarm (though little call for action).

But the storm has only just begun. Already, the resistance is gearing up for a powerful response.

Hours after the decision to fire Comey was announced, MoveOn.org put up an RSVP page promoting a protest at noon on Wednesday, in front of the White House:

Even last night, people started arriving at the White House with protest signs:

Signs outside the White House to protest Trump's Russia connections and firing of #Comey pic.twitter.com/NLHnQpSGSa

Perhaps anticipating trouble, the Secret Service is now trying to shut down the street between the White House and Lafayette Park, although agents are unconvincingly denying it has anything to do with the impending protest:

The protest is not limited to the White House. Another demonstration is scheduled for Wednesday evening in New York City:

White House firing of Comey is part of fascist consolidation of power. Time to organize protest that forces the regime out. #NYC pic.twitter.com/HS5fCrQyYW

The resistance is preparing to send Trump a message, loud and clear, that he has crossed the line by actively interfering in an FBI investigation. As more Americans stand together and demand accountability, Trump cannot sweep this controversy under the rug. His latest attempt has only emboldened the fight.