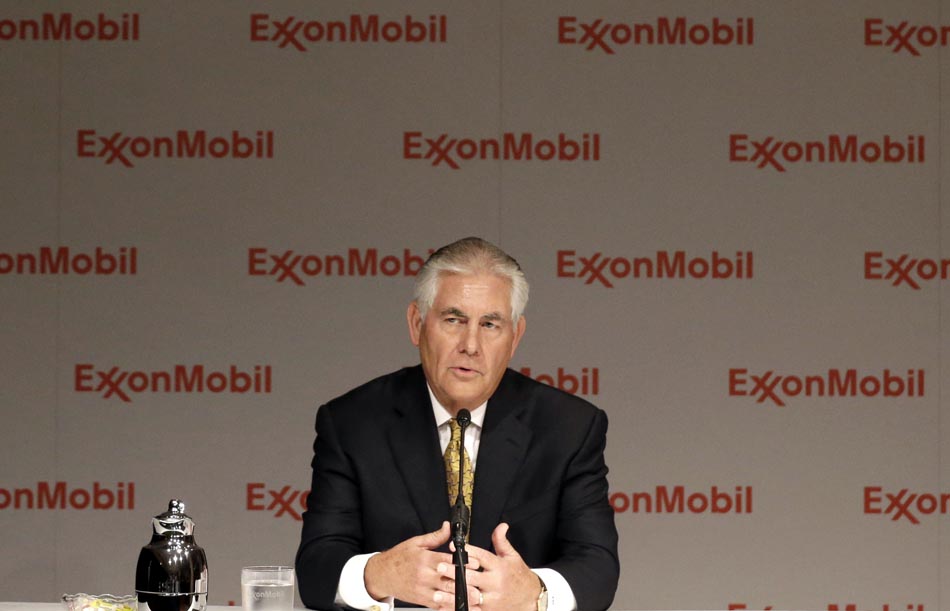 President-elect Donald Trump's nominee for Secretary of State, Rex Tillerson, has deep conflicts that are hostile to America's interests, which do not stop with his ties to the Russian government: He also possesses an ExxonMobil nest egg worth hundreds of millions of dollars.

President-elect Donald Trump's pick to lead the State Department already faces stiff opposition over his relationship with Russia, including a $500 billion deal with Russian government-owned Rosneft. Beyond that, though, ExxonMobil CEO Rex Tillerson also faces conflicts surrounding his stock holdings and pension plan that look to be nearly impossible to untangle.

Tillerson currently holds 2,618,856 shares of ExxonMobil stock, a portfolio worth $233,078,184.00 as of the Friday before Tillerson's selection was reported. By closing time the following Monday, they had shot up more than $5 million to $238,289,707.44, and gained another $4.1 million by the end of the day when his selection was officially announced.

In addition to the stocks, Tillerson has an ExxonMobil pension worth nearly $70 million.

According to Forbes, Tillerson faces three choices where his stocks are concerned, two of which would result in him losing between $71 million and $190 million of his fortune. Then there is this issue:

Tillerson holds just over 2.6 million Exxon shares. But he actually only technically owns 611,087 outright, or nearly $57 million worth. The rest are so-called restricted stock units. He holds the shares, and even collects the dividends they pay out, but he doesn’t technically own the shares, and it would be a while until he can.

Just over 1.3 million of those shares don’t vest—meaning fully become Tillerson’s property—until 2025. That’s a problem logistically, but also for the divestiture rules. The tax loophole that allows individuals taking government jobs to defer capital gains taxes only applies to stock that you fully own. RSU, on the other hand, are taxed as income when they vest, which Tillerson can’t avoid paying even if he rolls the shares into a mutual fund.

As Forbes notes, if Tillerson sells only the shares he actually owns, he will head the State Department while knowing that a hundred million dollars or so of ExxonMobil stock await him down the road — a consideration that could potentially influence an unimaginable number of State Department decisions and policies, as energy resources figure prominently in U.S. foreign policy.

Tillerson's Russian ties and financial entanglements may make him a good fit for Donald Trump, but not for the American people.