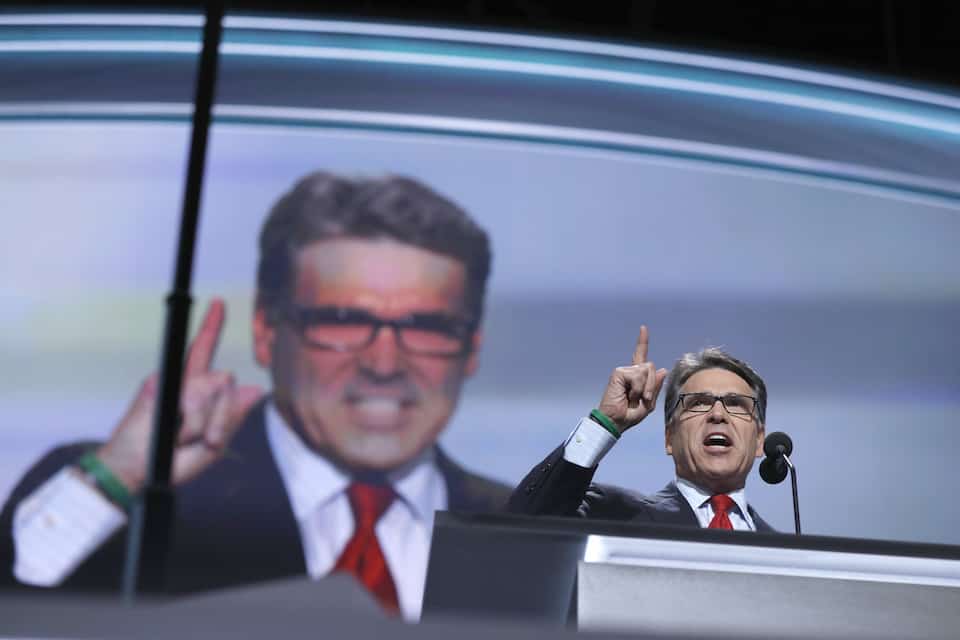 The Secretary of Energy and former governor of Texas wrote an op-ed attacking his alma mater's election of openly gay junior Bobby Brooks as student body president as a "mockery."

Former Texas governor Rick Perry has a lot of work to do as Donald Trump's new Secretary of Energy, not the least of which is guarding our nation's stockpile of nuclear weapons — something he did not even know was the Energy Secretary's job until he applied for it.

For some reason, however, Perry feels that one of the most pressing issues facing him is the result of the Texas A&M student body election.

Perry, himself a former Aggie, penned an angry op-ed in the Houston Chronicle, in which he attacked the election of Bobby Brooks, the first openly gay man to be president of the A&M student body.

By all accounts, it is a milestone for the school, which is famously conservative and has had issues with intolerance, but Perry did not see it that way. Instead, he claimed that the election was corrupt because Brooks's opponent had been disqualified after the polls closed:

When I first read that our student body had elected an openly gay man, Bobby Brooks, for president of the student body, I viewed it as a testament to the Aggie character. I was proud of our students because the election appeared to demonstrate a commitment to treating every student equally, judging on character rather than on personal characteristics.

Unfortunately, a closer review appears to prove the opposite; and the Aggie administration and SGA owe us answers.

Brooks did not win the election. He finished second by more than 750 votes to one Mr. Robert McIntosh. However, McIntosh was disqualified by the SGA Election Commission and Judicial Court through a process that — at best — made a mockery of due process and transparency.

In fact, the student government voted unanimously to disqualify McIntosh after receiving more than a dozen complaints of voter intimidation and campaign finance violations. Perry contends that the charges should not have counted because they were "anonymous" — which, in fact, is an important policy to prevent retaliation.

Indeed, in Perry's telling, the whole thing was an underhanded attempt to force diversity on the school:

let me see if I have this right: Rick Perry is somehow concerned about the election of the Tex A&M student body president? this is impt biz?

It takes a lot of nerve for 67 year old @SecretaryPerry to bully a college junior for fairly winning an election #TXLege https://t.co/Ulu2h0yqcW

Rick Perry has only done 3 things as Energy Secretary: Deny climate change, attack a gay student, and... I can't remember the third thing.

Perry should consider the possibility that he is projecting his own fear of diversity onto others. To flip around the question in his op-ed, would he be attacking the election process if it had been between two straight men? Or if, as he said, it had been Brooks who was disqualified?

It is unfathomable and embarrassing that the Secretary of Energy thought that this was a worthwhile application of his time and outrage. The American people surely deserve better priorities — not to mention better social tolerance — from a member of the president's cabinet.