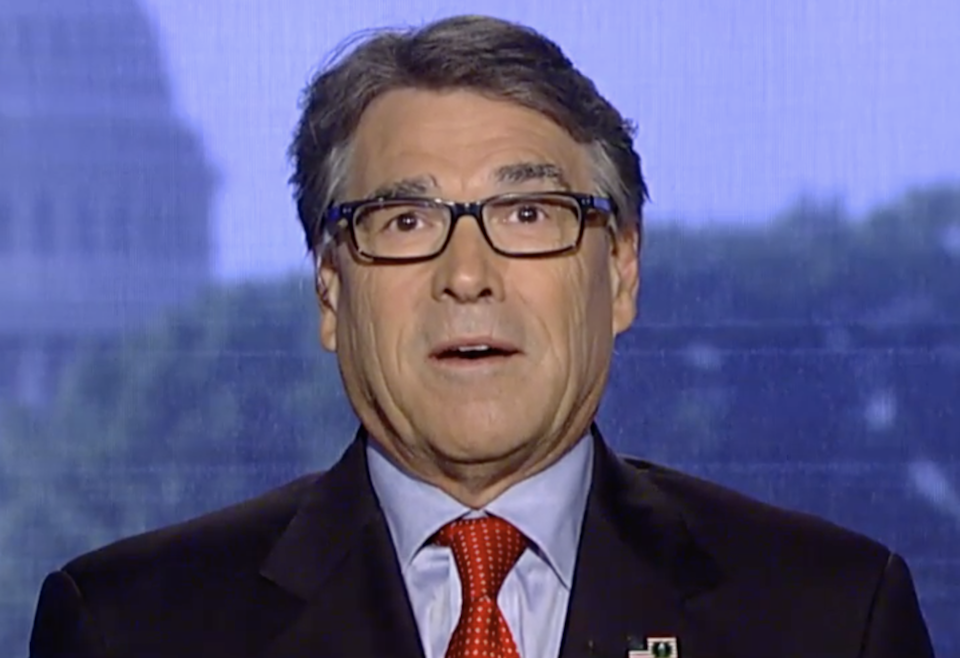 Rick Perry, current secretary of  the Department of Energy and former governor of Texas, wants America to know that Donald Trump's bizarre tweeting during Hurricane Harvey is simply evidence that he is "multitasking."

Perry appeared on "Fox & Friends," Trump's favorite show on the notoriously pro-Trump Fox News. Perhaps aware that Trump watches the show obsessively and has even taken cues about governing from its shoddy journalism, he took his on-air opportunity to put an unbelievable spin on the response to the storm.

Alleging that Trump is "really engaged" in responding to the floods, Perry said Trump is "multitasking" and " a lot of other things going on, as the president of the United States." He added that Trump is "a president who cares about his people greatly."

PERRY: The president's really engaged in this. As I've said, been involved with a number of major natural disasters over the course of the years, this president is as engaged — in a personal way — as any president that I have had the privilege to work with. He wants to come to Texas, matter of fact, he wanted to come today but he realizes that this is too early. Tomorrow, most likely he'll be at a — one of the evacuation shelters would be my guess, I don't know that, they'll make that decision I think later in the day.

But the president wants to be around some people, let them know that the federal government is a partner in this. We recognize, we respect the state's role in this effort, they're leading this, we're assisting them, we're leaning forward as far as we can in this, but the president is very, very engaged — he knows exactly what's going on.

Interestingly, Brian, he's multitasking at the same time, he's got a lot of other things going on, as the president of the United States that he's dealing with half-way around the world, right here in this country, he's going to be going, I think, Wednesday to do some events on the domestic side, so, this is a president who can multitask, it's a president who cares about his people greatly and we're seeing a reflection of that in his actions.

Among the things Trump has "multitasked" since the hurricane started to head toward Texas on Friday is a pardon for his close ally, the criminally racist Joe Arpaio, and a series of self-serving and off-topic tweets about nonsense.

Instead of demonstrating leadership, Trump continues to promote conspiracies and settle political scores. Through his Twitter account, interspersed with strangely voyeuristic tweets about the storm as if he were watching an action adventure movie instead of a massive disaster affecting millions of citizens he represents, Trump has also been busy retweeting right-wing pundits and journalists defending him.

He has refused to use his role and his online presence to promote fundraising for disaster relief, as his predecessor President Barack Obama has done.

Trump has made a natural disaster about him and his ego, as he hawks baseball caps instead of doing his job. He may be "multitasking," as Perry claims, but the different ways in which he is distracting himself are examples of his leadership failure, not something to tout.