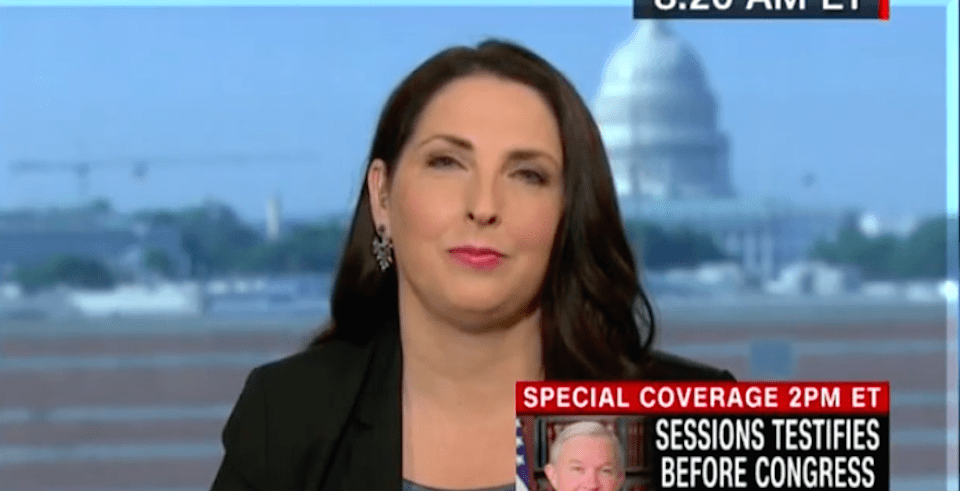 As evidence of Trump's Russia ties mounts, the chair of the Republican National Committee wants the the American people's concerns to be dashed from our minds.

The head of the Republican National Committee (RNC) has been making the rounds on television news shows calling for "an end" to all of the investigations into Donald Trump's possible collusion with the Russian government.

During her latest appearance, RNC chair Ronna McDaniel went so far to claim that the entire concern should be wiped from Americans' minds.

On CNN, McDaniel argued both that the "Russia cloud" was interfering with Trump's ability to implement his agenda, and that it was not interfering, but that people needed to talk about other things.

McDaniel then went on to make the astonishing suggestion that concerns over Trump's ties with Russia need "to be removed from the American people's mind":

CAMEROTA: I've heard all of the complaints that Russia cloud is preventing the president from moving forward with his agenda, but...

CAMEROTA: Well, hold on a second, then you're saying two different things. Is the Russia cloud preventing the president from moving forward with his agenda, yes or no?

MCDANIEL: No. I think the Russia cloud just needs to be removed from the American people's mind.

At a time when more and more evidence is coming to light about ties between Trump, his campaign, and his administration and the Russian government, the leader of the Republican National Committee is calling for a complete shut down of all of the investigations.

Not only that, she now is implying Americans are wrong even to be concerned about the violations of our national security and sovereignty by a hostile power. And in keeping with the authoritarian mindset of Trump and his cronies, that such concerns need to be "removed" from our minds.

Fortunately, the minds of the American people cannot, and will not, be controlled. Our concern for our republic and the Constitutional rule-of-law under which it was founded cannot be erased. And we will keep asking the questions about the Trump administration's relationship with Russia until we receive the answers we deserve.